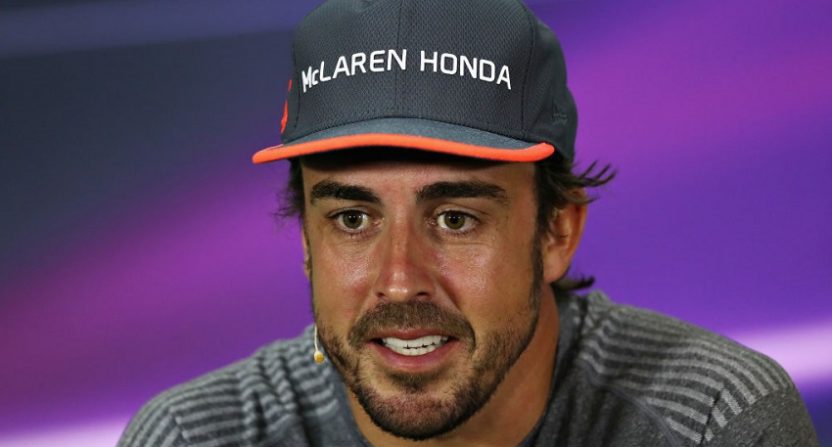 Since last week, after Fernando Alonso shockingly announced he was going to compete in the Indy 500, I have read many viewpoints ranging from good and bad about this bit of news.

One such notable viewpoint came from AP’s Jenna Fryer. Fryer is one of the most knowledgeable motorsports journalists in the world, but I was left confused by what she wrote about Alonso coming to Indianapolis. I wasn’t as confused as much that she felt it wasn’t a good move, but her reasoning behind her viewpoint left me puzzled.

“Who?” asked my 13-year-old daughter. Trust me, she’s a valuable gauge of what’s trending, and I guarantee she’d have talked up the race if Stewart or Patrick was in the field.

Alonso is a highly decorated driver who was once at the top of Formula One. IndyCar has plenty of international drivers, so adding the Spaniard for the 500 isn’t unusual in that respect. But his F1 titles came long ago, in 2005 and 2006, and he has yet to score a point in three races this year with McLaren.

Let’s be frank about the state of the IndyCar Series and the Indianapolis 500. Before the open wheel split in 1996, open wheel racing in the United States was arguably bigger than NASCAR and even rivaled Formula 1 worldwide in terms of popularity. The Indianapolis 500 really was the place that the best of the best wanted to race and win. And it was a place that Formula 1 teams looked toward to find that potential next big talent. Former F1 World Champions Emerson Fittipaldi and Nigel Mansell both continued their racing careers in CART while Michael Andretti and Jacques Villeneuve went to try Formula 1, with Villeneuve becoming World Champion two years after winning Indy.

Then the open wheel split happened and mostly everyone viewed IRL and CART as a joke. And if they didn’t view it as a joke, they at least realized that what they were watching was an inferior product than what they had before that. Even I realized that and I was nine years old at that time.

The Indy 500 no longer became the place where the best of the best was competing. In 1996, many of the best like Unser, Andretti, Rahal, Zanardi, etc. were in Michigan because they stayed in CART and not even the most prestigious race in the world could keep them from going to IRL. It took 12 years for the two series to fully reunite into one series, but by then the damage was done.

There have been great drivers and great racing over the past 20 years, but IndyCar and the Indy 500 no longer became a place Formula 1 teams looked to for emerging talent. They pretty much ignored IndyCar altogether and fewer big name drivers from other series came over to try their hand at the “Greatest Spectacle in Racing.”

Yeah, guys like Takuma Sato and Rubens Barrichello raced at Indy after they were done with F1, but it wasn’t like 30 years ago where World Champions were salivating at the chance to compete at IMS and it seemed like half the field either had F1 experience or could compete in F1 if given the opportunity.

That’s what IndyCar and the Indy 500 was and they are striving to get back to that. While they have been improving, let’s be real and call IndyCar for what it is right now. IndyCar is still a niche racing series even within motorsports that barely gets talked about unless it’s the final week in May. I love IndyCar and watch every race. I even went to the Indy 500 last year and was in victory lane (I’m the one in the white USA soccer kit) but I also understand the position IndyCar is in right now.

There’s a reason why The Comeback never writes about IndyCar. It’s because IndyCar doesn’t bring in page views. It did last year for the 100th Indy 500, but that’s a once-in-a-lifetime event. I wish I could write more about IndyCar than just the Indy 500, but nobody cares about IndyCar except for a small and diehard fanbase. The product is great and deserves more attention, but IndyCar needs to do something to generate more interest. At least IndyCar is attempting to get media attention with Fernando Alonso. And hey, it got us talking about it so it has at least worked out on some minimal level.

I will agree with Fryer that this may be a much bigger deal domestically if IndyCar had gotten someone within NASCAR. Fernando Alonso isn’t necessarily a household name in American motorsports homes so yeah, getting Danica Patrick, Tony Stewart or even Jeff Gordon would create a bigger buzz in the States than Alonso.

But while that would likely cause viewership to rise over the 100th Indy 500 last year, none of those three raise the prestige of the “Greatest Spectacle in Racing.” Alonso is a two-time World Champion and even bested Michael Schumacher twice when Schumacher raced at Ferrari. Alonso has 32 wins, including two at Monaco and is sixth all-time in F1 wins. And if it wasn’t for a largely terrible car he’s driving now, Alonso would still be a force in Formula 1.

Fernando Alonso may resonate more to the international crowd than those in the United States, but his impact will still be felt in both places. This past weekend, the talk of the F1 paddock was less about the Bahrain Grand Prix and more about the Indianapolis 500. That kind of talk, that kind of respect for the great race hasn’t been seen in over 20 years.

In addition, none of those three drivers would be back to compete again. If Patrick, Stewart or Gordon compete, I’m sure IndyCar would love to have them, but it would very likely be a one-off. Yes, Alonso is currently only competing in one race but entertain this possibility.

Alonso is 35 and as much as Formula 1 is the biggest series in the world, it’s not fun to drive an underperforming car all the time as he does with McLaren. In IndyCar, there is much more parity involved and the driver becomes more integral than the car when compared to F1. If he gets a taste of IndyCar and starts having fun, I have to imagine Alonso would consider doing more races or maybe even come race IndyCar full time after he’s completely done with F1. I’m making a lot of assumptions here, but this is much more realistic than if Tony Stewart competed instead. Alexander Rossi wasn’t expecting to stay in IndyCar before last year’s Indy 500. Then he won and now Rossi is here racing full-time, leaving his dream of a Formula 1 career behind with no regrets.

The year before he won, Rossi struggled to find a place in Monaco that showed the Indianapolis 500. When he won last year, it at least sparked an interest among those in Formula 1. Now with someone as revered as Fernando Alonso taking part, you can bet that more than a few places in Monaco as well as other places around the world will carry the “Greatest Spectacle in Racing” because every F1 driver will be sure to tune in and pay attention this year.

Alonso will need to get used to ovals as well as the car, so I’m not putting him as a favorite to win. But given he’s with one of the best teams in the series with Andretti Autosport (as well as McLaren), Alonso is at least going to be given every opportunity to win and that means he has a realistic chance. At the very least, he has an infinite chance to win Indy than if he stayed and tried to win Monaco.

Then keep in mind the driver who is stepping aside for Alonso. Stefan Wilson is making a very selfless move after being asked to make room for Alonso. I’m sure he would have loved to get back to competing at the Brickyard but in the long-term, it’s the best move for everyone. Fernando Alonso brings an added interest to the race we haven’t seen in decades. That brings more media to the race. More media means more exposure for the series as well as all the drivers. More exposure means more sponsorship opportunities. More sponsorship opportunities mean a much stronger series and a better chance drivers like Stefan Wilson get an opportunity to make a name for themselves for their driving ability and not based on who they are or how much sponsorship money they can bring to a team.

And if Alonso’s appearance results in more notable F1 drivers coming over and trying the Indy 500, the better. I really hope Stefan Wilson gets rewarded at some point for his selflessness because he did something not everyone would do. I wish it didn’t have to happen that he would need to step aside for Alonso but he knows it’s for the best and hopefully will help him in the future.

The first Indy 500 I remember watching was the classic 1992 race when I was five years old. Back then, you actually felt that the 33 drivers who lined up for that race were the 33 best race car drivers in the world. It’s been far too long since that has been a reality at Indianapolis. Fernando Alonso himself won’t fix things overnight, but at least it’s a way for IndyCar to continue to get the respect it deserves and get the Indianapolis 500 back to its rightful spot as the greatest race in the world.