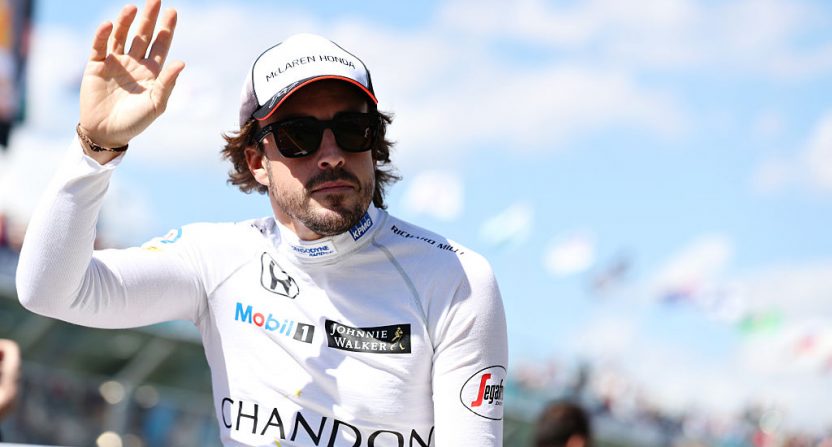 Fernando Alonso is a terrific driver, but the 35-year-old is choosing to forego racing in the Monaco Grand Prix in May. He’s missing the famous racing event to compete in another famous one, the Indianapolis 500.

The McLaren driver is a two-time Formula 1 World Champion in 2005 and 2006, and has already requested and received the permission of his McLaren team and their engine partner Honda to ditch Monaco for Indy. Neither probably minds too much as he’ll be racing for the Honda-powered Andretti squad with a McLaren branded car.

Despite having another chance to compete in Monaco, Alonso has already been there and done that. Instead, he wants to conquer a new challenge: the famed “Triple Crown” of winning Monaco, the Indy 500 and the 24 Hours of Le Mans. Alonso has won Monaco, but still hasn’t won in Indiana and at Le Mans.

Back in the 1960s, Graham Hill became the first and only driver ever to win all three of those races. Despite already being a World Champion, Hill won the Indy 500 as a “rookie” in 1966 and Alonso will hope to replicate that. Alonso completed the first leg by winning the Monaco in 2006 and 2007.

Still, while this is being done in the service of chasing that Triple Crown, it’ll be extremely tough for Alonso to win the Indy 500 during his first time racing in the event. He spoke to the BBC about some of the differences:

“I’ve never raced an IndyCar car before, and neither have I ever driven on a super-speedway, but I’m confident I’ll get to grips with it fast.

“I’ve watched a lot of IndyCar action on TV and online, and it’s clear that great precision is required to race in close proximity with other cars on the far side of 220mph [354km/h].”

Look I know I’m not a professional racer, but I feel like watching IndyCar on TV and on your computer can only do so much.

However, Alonso is giving himself plenty of time to practice in Indiana. The race is on May 28th, but he’ll start practicing on the track nearly two weeks before then.

“I’ll be flying to Indianapolis from Barcelona immediately after the Spanish Grand Prix, practising our McLaren-Honda-Andretti car at Indy from 15 May onwards, hopefully clocking up a large number of miles every day, and I know how good the Andretti Autosport guys are,” Alonso told BBC. “I’ll be proud to race with them, and I intend to mine their knowledge and expertise for as much information as I possibly can.”

Naturally, Alonso’s sponsors had to consider what it would mean for them to lose the great driver for such a high profile race in Monaco. But then again, if Alonso wins, that’ll help their brand as his sponsor.

On top of that, he is bringing his two big car sponsors in McLaren and Honda with him (in a way, at least). McLaren executive director Zak Brown is pretty confident in the driver too.

“Put it this way: the team he’ll be racing for won the race last year, using the same Honda engine, and he’s the best racing driver in the world. That’s quite a compelling combination,” Brown said. “He’ll have his work cut out to acclimatise to running at super-speedway velocities, but ultimately it’s quality that counts in all forms of motorsport, and Fernando is very definitely quality. He’s ballsy and brave too.”

The 35-year-old Alonso has won an incredible 32 grand prix races, which is the sixth-most all time. But despite having so many titles under his belt, Alonso hasn’t won a grand prix since the 2013 Spanish Grand Prix.

“Fernando is a great talent and I have full confidence that he will represent very strongly for McLaren, Honda and Andretti Autosport,” Michael Andretti who runs the Andretti team said.

Right now Jenson Button is rumored to replace Alonso at Monaco for the McLaren team. McLaren hasn’t made it official yet, but Button would make sense. He retired from F1 in 2016, but won the 2009 World Championship, and has won 15 races overall.

He’s also getting a lot of attention due to those rumors.

Why do I have so many missed calls? ?

We’ll see if Button steps in for Alonso. But at the very least, we’ll get to see Alonso chase the next step in that Triple Crown dream.