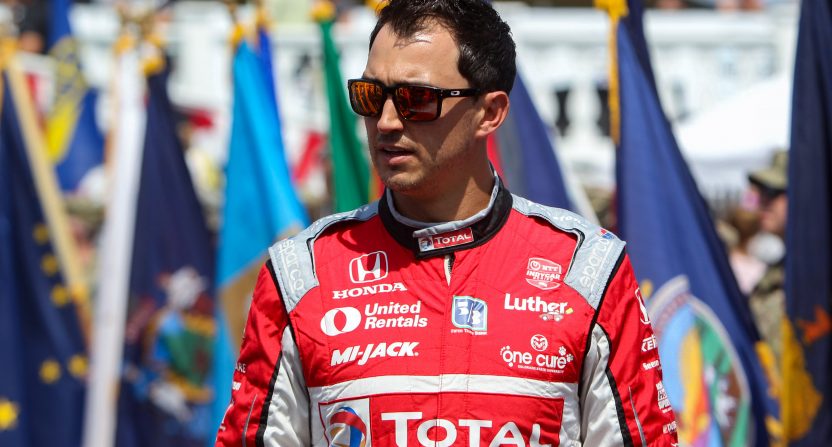 Graham Rahal is a man with many hats. He’s a driver, a manager, a businessman, and a son. And for much of the time, he’s wearing multiple hats at the same time. Despite being 30, Rahal has been in open wheel racing since 2007, and moved over to the NTT IndyCar Series the next year when Champ Car merged with IndyCar.

Graham races for his father Bobby on Rahal Letterman Lanigan Racing, but Graham didn’t just get there because of his last name. Instead, Graham raced for multiple teams, collecting one win and seven podium finishes, before moving to drive for his father full-time in 2013.

The lines between father and son with owner and driver might be a bit blurred at times, but Graham told The Comeback that they’re able to find time to balance both aspects of their relationship.

“Well, we’ve always had a very close relationship, [Bobby] and I, so frankly I think it’s never really changed a lot,” Rahal told The Comeback. “Certainly nowadays it’s a little more business minded, particularly at the track than it is father and son. I think we do always find a good balance though. Like at evening times we turn off all the business junk and we enjoy our time together as a family. So we are pretty good about that.”

Starting his team in 1991, Bobby Rahal has seen his ups and downs as a team owner. The legendary racer won the CART championship in his first season as an owner/driver, but then failed to qualify for the Indy 500 the next season. In retirement as a driver, Bobby’s team won the 2004 Indy 500 with Buddy Rice driving (and David Letterman as a co-owner), but then had to scale back operations in 2009 and be a part-time team for a few years.

Today, Rahal Letterman Lanigan Racing has a two-car team with Graham and 2017 Indy 500 champ Takuma Sato. And with consistent growth, a potential third car is an option in the future. As a team who had to be a part-time team at one point, RLL knows the importance of not overextending resources. And to hear Graham talk, in a time where it’s fashionable to expand, sometimes not expanding is the right move at the moment.

“[Not overextending resources] is very important and I think that’s what we probably have to be most careful of, as it would be easy for us to overextend,” Rahal said. “It’s easy, it’s tempting to want to grow, grow, grow. But all while you grow, grow, grow, you need to think about what is actually going to be best and what’s going to help the entire team in the big picture.”

“And sometimes, to be frank, that’s not growing, that’s not expanding. It’s thinking about it in a different mindset. So we have to be a little bit cautious with that and how we go about it, for sure. But I feel like we’re on a good track. I feel like we have good money, good sponsors, good partners, all that sort of stuff. So I feel like we’re headed down the right path, right now.”

Much of this growth within Rahal Letterman Lanigan Racing is a result of IndyCar’s growth in general. Over a decade since the open wheel split ended, IndyCar has grown in many facets. One such sector of growth has been in NBC’s exclusive TV deal to show IndyCar races. When NBC was splitting races with ABC/ESPN, there wasn’t much promotion for the series. Now, ads for IndyCar in addition to the Indy 500 have been shown during many NBC sports properties, including NFL playoff games. The result has been higher ratings throughout the year, including an 11 percent jump for the Indy 500 over 2018. All of that has resulted in a bright future for IndyCar and for teams like Rahal Letterman Lanigan Racing.

“Yeah, [IndyCar is] headed down the right path,” Rahal said. “[IndyCar president] Jay Frye, I can go on the list of all the names that I think are very influential, but I’d like to think too that us as a family, the Andretti’s, the Penske’s, a lot of big families that are involved in the sport that are trying to help push it and grow it too. Good names, good young names, good young Americans, which people like. So all of those things definitely help.”

“And a great [broadcasting] partner. With NBC, the great thing about NBC is that we’re on the main channel a lot. We’re getting the attention a lot and that’s… we never used to get that at all, so it’s definitely… we used to be the stepchild that got pushed to CNBC on a Sunday afternoon, get no TV rating at all. So we’re definitely going down the right path for sure.”

“I was watching golf and they were promoting [IndyCar]. We never used to get that at all. And the TV numbers are up, they’re up considerably, so NBC is being rewarded for it and so is the series… so I definitely feel like there’s a lot of potential to see the numbers grow even further, which would be awesome.”

The Rahal’s ownership and management style for their racing team also applies to their business ventures. They own dealerships for multiple car makes throughout Ohio and Pennsylvania. Full disclosure, I bought my car from one of Bobby’s dealerships a few years ago. So while Bobby and Graham are dealing with the race team, they also have to keep an eye on their dealerships. How do they do that? It’s all about delegating the work and putting the right people in charge so you don’t have to be involved all the time.

“Well, I think [racing and business] is very similar,” Rahal said. “Racing is all about the people that you have surrounding you to to make it all happen. In the car business, the car dealerships, are all about the people that you have taking care of you as a client, taking care of the stores, keeping them presentable, keeping them clean and so on. And so, from a staff perspective it’s where I think we’re lucky on both sides to have truly some of the best people in the industries. We’re always lucky that it’s worked out well for us.”

“How involved are we? Well, I’m getting increasingly involved, but I’m not going to sit here and tell you that we run them day in and day out. One of Dad’s greatest things that I admire the most, one of his greatest skills is to hire the right people and let those people do what they need to do. Which is often an issue for people that start companies, to trust in those that you brought into their positions and to let them do what they are hired to do.”

The three biggest teams are Andretti Autosport, Chip Ganassi Racing, and Team Penske, which take up eight spots on the grid. Those three teams have won all but three of 16 races this IndyCar season, and one of those wins was from Harding Steinbrenner Racing, which has a partnership with Andretti. The only two races won by a team not affiliated with Andretti, Ganassi, or Penske is Rahal Letterman Lanigan Racing. Takuma Sato won in Birmingham as well as at Gateway, and RLL has won at least one race each year since 2015.

While Rahal Letterman Lanigan Racing isn’t usually seen as being on the same level as Andretti, Ganassi, and Penske, this team has held their own and are closing the gap. This weekend at Laguna Seca, Sato has a chance to achieve the team’s first top five points finish since 2016, as well as have both cars finish in the top 10 in points for the first time since 2004. This has Rahal confident in where they are and their future as a winning team.

“From a budget standpoint I think the one thing that we do well is that we are well funded,” Rahal said. “We are not three cars, but we are well funded. Sometimes it’s easy to get well funded and therefore you get greedy and you grow, and now you’re not well funded because now you’re spread very thin across multiple platforms and everything else. The one thing our team does well, I think, is so far our sponsors, our commitment level to our two cars is very strong, and we’re very committed to these two. And if a third comes along, it’s only going to be because we can support that, as well, I think, with a good financial backing and so on.”

“So, I feel good about where we’re at. I feel good about our future as a team. And we’d like to compete with the Andretti’s, we’d like to compete with the Penske’s. We’d like to compete with others that are definitely larger than us. There’s no reason we can’t, so we do now. I mean, we’re close now, but there’s no reason we can’t be better than them. At our prime, our team at its prime won championships in this sport. So it can happen. It’s not a matter of if this team good enough? Undoubtedly it’s good enough, but we just need to build back up to that point. When I came here in 2013, it was not prepped. It was not ready to be at that point. And I think we’re getting closer, for sure.”

As far as long term goals are concerned, Rahal is clear that they want to win championships. That’s not going to happen this season, but Rahal Letterman Lanigan Racing definitely has the foundation to someday accomplish those goals. Both Rahal Letterman Lanigan Racing and the NTT IndyCar Series are on an upward trajectory. Graham feels a responsibility to grow both his team and his series, and it appears he’s doing a good job at doing that as the 2019 season ends.

“We want to win championships and there’s no reason that we can’t,” Rahal said. “So we want to win championships, we want to win a lot more races. We can do that. Some of those things we can do in the short term, some are a little bit longer plays. And ultimately, for me personally, I put a lot of pressure on myself. I think maybe too much, to try to help grow this sport, as well. The sport is important to me. I’d like to see it continue to grow and succeed. And so hopefully we can make that happen.”