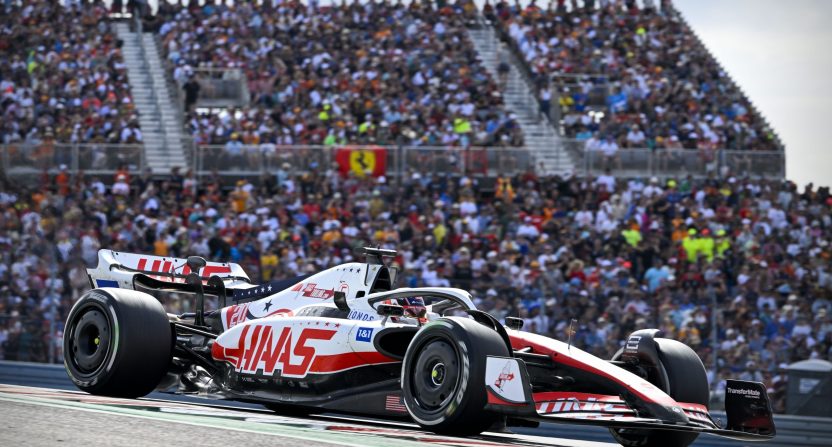 Gene Haas made one driver change over on the NASCAR side. On Thursday, he made a driver change on the Formula 1 side as Nico Hülkenberg replaces Mick Schumacher for the 2023 season.

We're pleased to welcome @HulkHulkenberg to Haas F1 Team as our driver for the 2023 FIA Formula 1 season, alongside Kevin Magnussen.#HaasF1 https://t.co/GfyiUWLlYV

Schumacher’s job was on the line throughout the 2022 season, as team principal Guenther Steiner publicly pointed out that Schumacher crashed a lot, which isn’t the thing you want with one of the more underfunded F1 teams on the circuit. While Steiner revealed that Mick’s crashing wasn’t a factor in him being replaced, Steiner felt that Haas F1 needed two experienced drivers in order to improve the team at a faster rate.

“I think that the experience of multi-years in Formula 1 that never have been with another team than us,” Steiner told media, including PlanetF1, when asked what Schumacher was missing.

“So by Nico being seen [as a driver with] three or four teams before, experience [is key] and experience takes time to make, and in the moment, we don’t have time, because we want to move forward.

“We don’t want to be where we are. Now, we want to get better.

“It is not Mick’s fault that we are where we are and we only have ourselves to blame, but we need to come up again and there is a shorter way by taking a guy with a lot of experience, which has done this in multiple teams.”

Schumacher posted a statement on his social media channels. He wrote, “I don’t want to hide the fact that I am very disappointed about the decision not to renew our contract. Nevertheless, I would like to thank both Haas F1 and Ferrari for giving me this opportunity.”

This is Hülkenberg’s sixth F1 team in a career that has been stop/start since 2010. He’s had two separate stints as a test driver and spent COVID as a supersub for drivers who tested positive for the virus and couldn’t race. In that time, Hülkenberg tried sports cars, winning the 24 Hours of Le Mans with Porsche in his one and only attempt in 2015. Hülkenberg’s most recent F1 activity was taking over for Sebastian Vettel for the first two races of the 2022 season when Vettel had COVID.

Hülkenberg is notable for having the most career F1 starts (181) without reaching the podium. Chances are that streak will continue as Red Bull, Ferrari, and Mercedes have a stranglehold on the top six, but his experience should prove valuable as Haas looks to be the best of the rest. And as we’ve seen before, stranger things can happen.