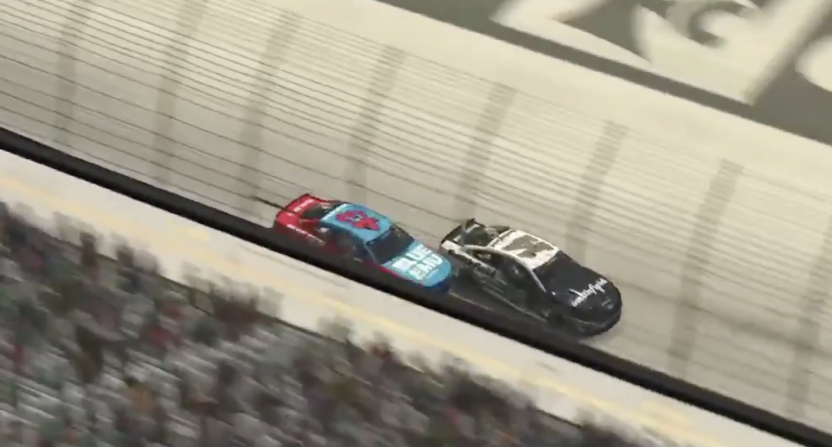 Bristol really lived up to its name this past weekend, even if that was in the virtual sense. We had drivers wrecking each other and getting angry at each other throughout the race. It’s Bristol baby, and that’s to be expected.

At the same time, Sunday’s eNASCAR iRacing Pro Invitational Series race highlighted more and more of a rift between how everybody individually views this series.

The eNASCAR iRacing Pro Invitational Series was originally set up by a bunch of drivers to have a bit of fun on a Sunday afternoon and give fans an escape from our quarantined lives in the wake of the COVID-19 pandemic. We’re home, we’re not really happy about anything right now, and some drivers got together to do their part to put a smile on our faces for a couple hours. That’s admirable and the drivers, NASCAR, iRacing, and Fox Sports deserve a ‘thank you’ and credit for that.

However, eNASCAR is becoming more and more of a serious business. iRacing and eNASCAR is the hottest thing in mainstream sports right now. Each race is getting a million viewers. Sponsors are now looking into get in on the action and either sponsor drivers already participating or getting their usual drivers in even if they may or may not have any interest in iRacing.

For something that was originally meant to be fun, it got really serious on Sunday. And the problem is NASCAR, iRacing, Fox Sports, and many drivers still view this as a bunch of drivers coming together to have fun and put smiles on our faces and it took us a few weeks to burn that bridge, for better or worse.

The incident that really brought this to light was a collision between Clint Bowyer and Bubba Wallace. Early in the race, the two tangled and kept tangling and Wallace rage quit in response. That got the attention of Wallace’s race sponsor Blue-Emu, who dropped him as a sponsor.

I ruined so many peoples day by quiting..a video game..

This isn’t about who’s in the right or who’s in the wrong, but the fact is this happened and this is a sign of what’s to come if the powers that be fail to take things seriously.

Sponsors are necessary in NASCAR. They fund teams and pay drivers and without them, we don’t have a sport. Having said that, why are they necessary in eNASCAR? The only requirements a driver needs in order to race is a rig (computer, monitor, steering wheel), an Internet connection, and an iRacing subscription. And while some drivers spend lots of money on their rigs, Texas winner Timmy Hill was able to race and win on a system that is rather affordable for the average person.

Sponsors might be nice, because everyone could use some more money, but it’s not crucial for the operation of the eNASCAR iRacing Pro Invitational Series. There isn’t a correlation between sponsorship money and how a car performs in iRacing. Fans are cool with sponsors in NASCAR because they help fund the teams but sponsors also bring a sense of control and responsibility that fans have criticized as making drivers “too vanilla” in comparison to drivers in past generations for fear of doing something and risk losing that sponsor.

That brings us back to the Bubba Wallace/Blue-Emu situation. Drivers are not getting any prize money, they don’t make the Playoffs, and as we said before, this was originally created so drivers can have some fun and give fans an escape. So if a driver gets caught up in a wreck or intentionally wrecks someone, it’s done in a safe way where drivers aren’t at risk of being hurt and the team doesn’t have to work all hours of the night physically fixing the car.

In the end, iRacing is a game and it’s something to do on a Sunday afternoon. Hell, Matt DiBenedetto raced in his underwear one week, iRacing is supposed to be fun. But when a sponsor is paying a driver money to represent them, and they feel a driver isn’t taking things seriously, suddenly this becomes serious and it’s less about having fun.

I’m sure Bubba Wallace didn’t expect that exiting a race would result in a sponsor dropping him. And while I’m sure in his mind that what he did still isn’t that big of a deal, he might’ve reacted differently if he had known this would happen. Whether or not you agree with Wallace’s reaction, you can’t deny the control a sponsor has on their driver.

If NASCAR and iRacing doesn’t step in and have some sort of organization in place for the rest of the season, they will endure more problems and drive fans away from something that was originally supposed to be a fun escape. If I’m seeing everyone taking part in a lame pissing contest on something that’s supposed to be an escape from all that, I might as well just watch the government do the same thing and I’ll get my escape from that by watching Tiger King.

The eNASCAR iRacing Pro Invitational Series is gaining traction but because of that, drivers and sponsors see $$$ and publicity opportunities that it’s now become something bigger than anyone probably expected. After three races, this isn’t about having fun anymore and if NASCAR and iRacing still wants to provide an escape and keep fans having fun and being entertained, they need to take their series more seriously before it becomes just another toxic part of our lives.