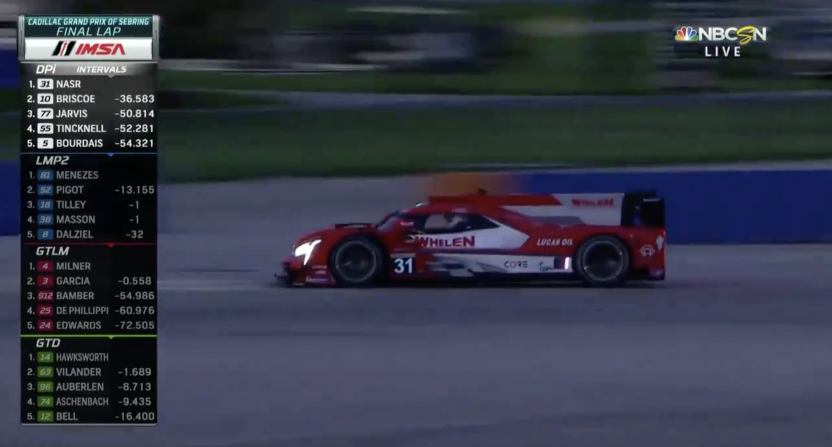 Just two weeks ago, IMSA driver Felipe Nasr revealed he was diagnosed with COVID-19 while on his way to Daytona, Florida for the resumption of the IMSA season. After missing one race, Nasr recovered and was medically cleared to compete for the Sebring race and he did just that, winning in his first race back since recovering from the virus.

Normally a 12 hour race, this weekend’s race at Sebring was just two hours and 40 minutes (the 12 Hours of Sebring will take place November 14). Even with the shortened distance, it was a tough and physical test as day turned to night with Nasr and co-driver Pipo Derani taking the honors in their Cadillac by nearly 35 seconds. Class winners included Spencer Pigot/Patrick Kelly/ in LMP2, Tommy Milner/Oliver Gavin in GTLM, and Jack Hawksworth/Aaron Telitz in GTD.

Nasr and Derani led for the vast majority of the race and after struggles for the #31 at both Daytona races, the Action Express team got their first win of the season. The duo finished runner-up in the LMP1 championship last year and due to missing a race for COVID-19, Nasr cannot win the championship as long as Derani participates in every race. So for Nasr, it’s about race wins and getting his co-driver a championship.

After only recently being medically cleared to compete, Nasr had been in quarantine for the past couple weeks after experiencing mild COVID-19 symptoms. Driving from Miami to Daytona, Nasr took a COVID test as a precaution and found out he was positive before he even got to the track. The decision, while a precaution, was smart because many at Daytona could’ve potentially been exposed. And now, fully recovered, Nasr is back in Victory Lane.