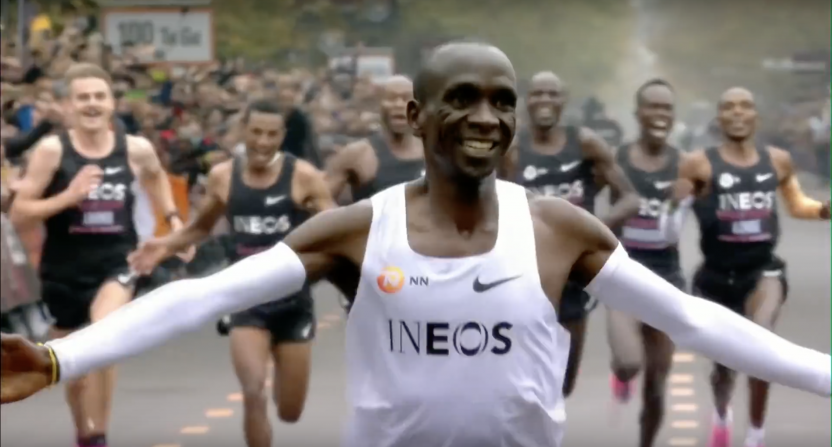 There is an argument that Eliud Kipchoge, the best distance runner of all time, is the world’s greatest living athlete. He is far and away the fastest, and most decorated, marathon runner ever. His dominance in a grueling, competitive field is nearly unprecedented.

Rarely would a slim runner overtake powerful, robust athletes for the title of “best athlete,” but this is a rare case. Kipchoge is unique.

He is not a pinnacle of strength. He does not play with spherical or oblong objects. His body type does not scream all-time great athlete. And yet: Kipchoge has just completed one of the most impressive physical feats in human history.

His 1:59:40 marathon time, ran on October 12 in Vienna, broke the two-hour barrier, which had essentially been considered unreachable before Kipchoge. WIRED put out a YouTube video before Kipchoge’s last attempt at the sub-two hour marathon titled “Why It’s Almost Impossible to Run a Two-Hour Marathon.” Just as the four-minute mile barrier was in the ‘50s, the two-hour marathon was a far-off goal, something we hoped could happen in our lifetimes.

Kipchoge accelerated the timeline. He ran 2:00:25 in the Nike Breaking Two challenge two years ago, a similar concerted attempt to break the barrier. He holds the official marathon world record with a 2:01:39 time in the Berlin Marathon. Amazingly, Kipchoge has won 11 of the 12 marathons he has raced, finishing second in the other.

Distance running has never seen someone like him — so dominant, and so unprecedented in his pace. Kipchoge went from an above-average long distance track runner, winning a silver medal in the 5000m at the 2008 Olympics, to dominating the marathon for an extended period of time. Now that he’s accomplished everything a runner can accomplish, including gold in the 2016 Olympics, Kipchoge set his sights on breaking two hours. It felt inevitable that he would do it in Vienna.

Due to the advantages the British company Ineos set up for him, Kipchoge did not set the IAAF world record. The pacemakers rotated in and out. People on bikes gave him water, instead of Kipchoge having to pick it up himself from a table. It was not a race setting, and his carbon fiber Nike shoes have caused consternation. But despite enjoying every possible advantage, Kipchoge ran 26.2 miles in less than two hours, which is an achievement no matter how it’s done.

Watching Kipchoge run is mesmerizing. He carries himself with efficiency and assertiveness. You can tell he’s the best just by observing his clean strides and tight bodily movements, which make him appear as though he’s moving slower than the other runners even as he steadily blows by them. Kipchoge keeps his arms locked and his thumbs out, scraping the fabric of his shirt with every stride. His head is locked in place, never tilting or bouncing, for that would be an indication of fatigue. He stares straight forward, calm and relaxed, simply out for a Saturday morning run. His casual appearance disguises his ridiculous pace.

Perhaps thinking about things besides running during his marathons helps him forget the pain. Read any of his quotes, or listen to any of his interviews, and you’ll see that he has perspective on all of this. Kipchoge knows the implications of what he’s doing, and he wants to spread fitness and the benefits of running.

“I have tried,” Kipchoge said immediately after the run, somehow not completely out of breath. “I am the happiest man to have run under two hours, in order to inspire many people, to tell people that no human is limited, you can do it, and I’m expecting more (people) all over the world to run under two hours after today.”

Listening to Kipchoge, you can hear how much he understands the significance and the history of it all. Everything he says, about the pacemakers, or about the race, or about his training partners, shows how much he values the accomplishment.

When asked about his wife and kids being in Vienna to watch him, Kipchoge said, “I’m happy for them to come and witness the history. They will be among those who made history, and I’m happy for them.”

Kipchoge does not speak arrogantly. He showers credit on those who helped him along the way, and emphasizes their role in his achievements. If he were American, he would be a national hero. He certainly is a national hero in his native Kenya, where people partied in the streets after he ran under two hours.

Kipchoge has secured a status as one of the world’s legendary athletes, on par in his achievements with Usain Bolt, Michael Phelps, and LeBron James. As others age out of dominance, Kipchoge endures. Others will eventually match and break his records, but he will go down as the runner who broke two hours years before anyone thought it could be possible. Add Eliud Kipchoge’s name to the list of undisputed sports legends.