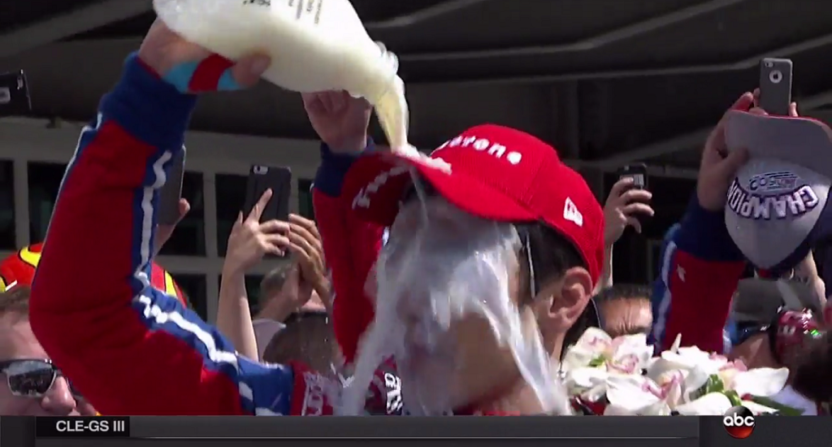 Takuma Sato had only won once in an Indy Car race, but he picked the best race imaginable to head back to the winner’s circle.

Sato made the pass for what would be the final lead change of the race with less than ten to go, taking over from three-time Indy champ Helio Castroneves and not relinquishing it from there.

Here’s how it looked, and sounded:

That unbridled joy is fantastic!

Here he is with the celebratory winner’s milk:

Speaking from experience, he might regret pouring that milk all over himself after spending some time in Indiana on a warm Memorial Day weekend. (Then again, probably not.)

Though the action picked up after Scott Dixon’s horrific crash, the last segment of the race was marred by stops and starts, including a long caution in the wake of this accident that collected multiple drivers:

There were also plenty of engine failures, including that of Formula 1 champ Fernando Alonso, who was making his Indy 500 debut. As for Sato, his demeanor and personality were universally praised post-race by commentators and competitors alike. He’s had success at Indy in the past, nearly winning the race once before in 2012, and finishing third at the 2004 United States Grand Prix when he was a Formula 1 driver.

It was a solid race, though it might most be remembered for Dixon’s accident. Thankfully he’s okay.