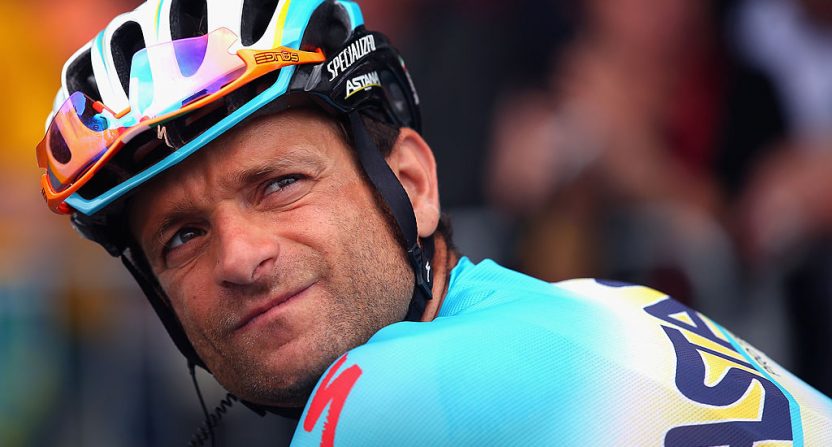 The cycling world was struck by tragedy Saturday with the news of Italian cyclist Michele Scarponi’s death. Scarponi, 37, was killed in a collision with a van while out on a training ride. This came less than a week after he won the first stage of the Tour of the Alps Monday, finishing fourth in the overall race when it wrapped up Friday. He then went home to his family, but started training again Saturday, and was then killed in this crash. Here are more details on what happened from his Astana team’s statement:

A statement from Team Astana read: “This is a tragedy too big to be written.

“Born on 25 September 1979, he left a wife and two kids. Michele ended fourth in the Tour of Alps yesterday afternoon in Trento. Then he went home in Filottrano (Ancona) by car with his masseur and was home in the evening to his family.

“This morning Michele went out on his bike for an early morning training and there the tragedy happened.

“We left a great champion and a special guy, always smiling in every situation, he was a real milestone and a landmark for everyone in the Astana Pro Team.

“The Astana Pro Team clings to the Michele family in this incredibly painful moment of sorrow and mourning.”

Scarponi had been racing professionally since 2002, and he put up plenty of impressive moments. In particular, he won the 2011 Giro d’Italia (after Alberto Contador was disqualified thanks to a doping violation), the 2009 Tirreno−Adriatico and the 2011 Volta a Catalunya. Over his career, he competed for seven different professional teams, and he had been with Astana since 2014. He played a key role for them recently, too, leading the team in this week’s Tour of the Alps:

Scarponi had recently been named the leader of the Astana team for the Giro d’Italia after Fabio Aru was ruled of the race due to a knee injury.
He won the opening stage at the Tour of the Alps on Monday and wore the race leader’s jersey for a day. He dedicated his victory to the earthquake victims of central Italy, to his wife Anna and their young twin sons, Giacomo and Tommaso.

Here’s a tribute video his team put together:

In our memory forever… Big champion and great friend… Michele Scarponi, you are in our hearts. pic.twitter.com/6P3QsStiXX

Many top cyclists also weighed in on the news on Twitter:

Absolutely devastating to see the tragic news about @MicheleScarponi . One of the nicest guys you could ever meet. RIP my friend. pic.twitter.com/hJrx4hgdoE

It's impossible to find the right words.I will miss you Michele Scarponi.Always friendly, smiling and a real gentleman. Sad day for cycling

Devastated to hear the news about Scarponi. Can't believe it. My thoughts with all his friends, family and team

Terrible news to wake up to. One of the smiliest happiest guys in the peloton. RIP

Our thoughts are with Scarponi’s family and teammates.