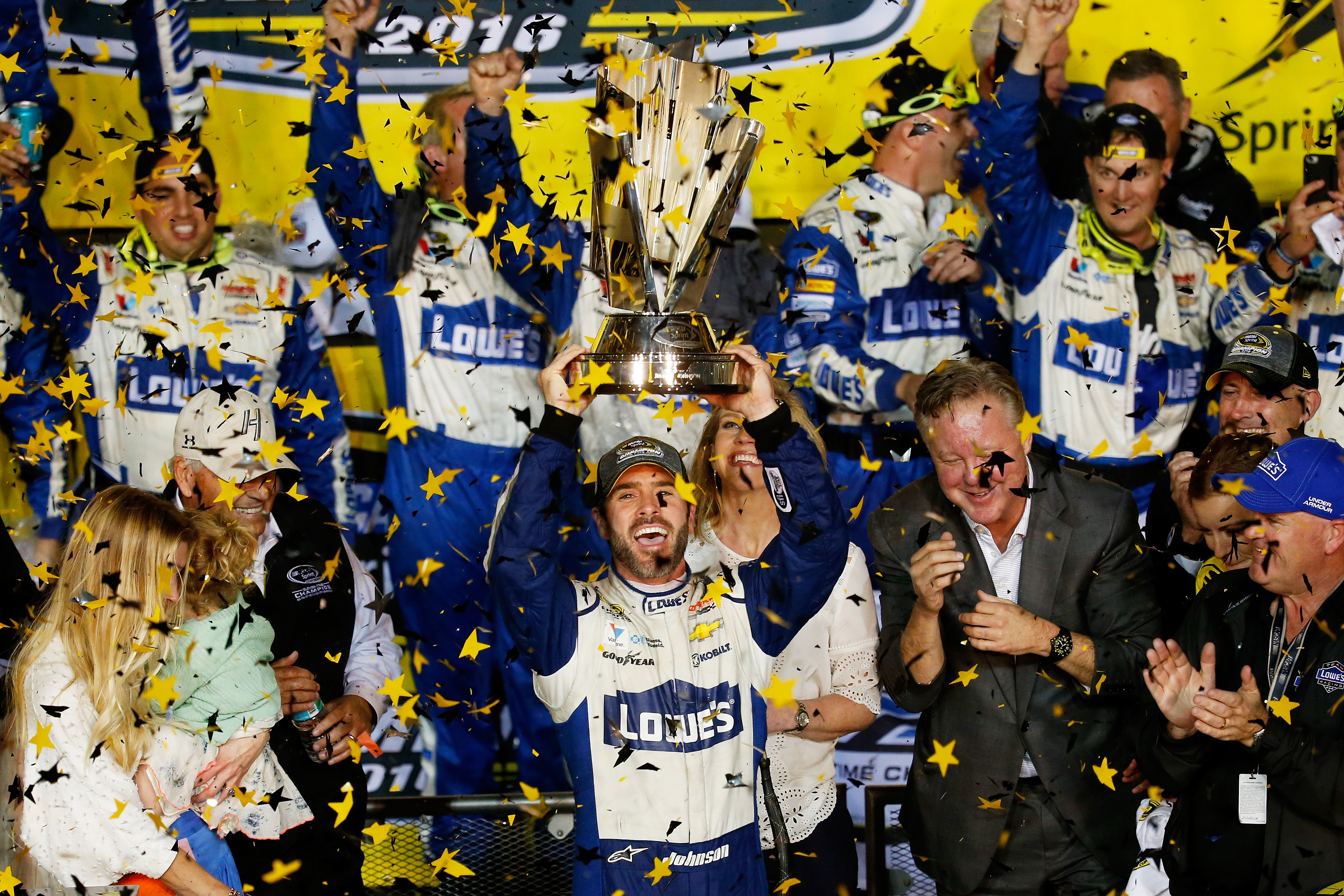 In NASCAR, it’s not about where you start but where you finish. After having to start at the back of the field, Jimmie Johnson marched through from 40th place and dodged a big accident late in the race to make history. Not only did Johnson win the Ford EcoBoost 400, he tied legends like Richard Petty and Dale Earnhardt by winning his 7th NASCAR Sprint Cup championship.

In all seriousness, Johnson was pretty much an afterthought for almost the entire race. Championship contenders Carl Edwards, Joey Logano and Kyle Busch were all up toward the front but Johnson could really only reach the top 10 for the majority of the race. It wasn’t until a fortunate bit of luck toward the end where the track literally opened up and Johnson made his move.

On a restart with 10 laps to go, Logano got a better restart from behind over Edwards. Edwards, not wanting to lose the lead, instinctively went to block Logano and ran him down into the yellow apron. Logano wasn’t going to let up and potentially cost himself a championship so he stuck to his line, had his front fender beside Edwards and Edwards went into the inside wall. That caused a fiery accident, taking out multiple cars, including Edwards.

“That is exactly what we thought Joey Logano was going to try to do.” – @JeffBurton #NASCAR #TheChase https://t.co/v3pF1DTeRD

In an unbelievable act of sportsmanship especially in a situation like this, Edwards took full responsibility, went to Logano’s pit hauler to let them know it was a racing incident and wished them luck on the rest of the race.

With just three drivers now battling for the Sprint Cup, Johnson suddenly found himself leading Busch and Logano. With nothing to lose, Logano went into the pit to change tires and on the restart, blasted his way up to Johnson. Busch fell back and another caution came out. On the restart, Kyle Larson led with Johnson on the inside in 2nd and Logano behind Johnson in 3rd. Busch went into take tires but unlike Logano, that move didn’t work. So it came down to Johnson and Logano and while he could have let Larson take the win and still win the championship, Johnson didn’t leave that to chance. In his only laps in the lead, Johnson took the lead in Overtime, drove away and drove into history.

Surely, this championship puts the 41-year-old Johnson into the pantheon of NASCAR legends. Johnson has won five-straight championships, something noboby has ever come close to doing. He won his 80th race, which puts him 7th in wins among Sprint Cup drivers. And he has won his 7th championship, doing that within a 10 year stretch. It took Petty 15 years and Earnhardt 14 years. If there was any doubt at the legacy of Jimmie Johnson, he just silenced that doubt. Regardless if you love him or hate him or feel the Chase playoff system helped him win his titles more than Petty or Earnhardt, the fact remains that Johnson has won seven Sprint Cup championships and at 41, it’s not out of the question that he could win even more.