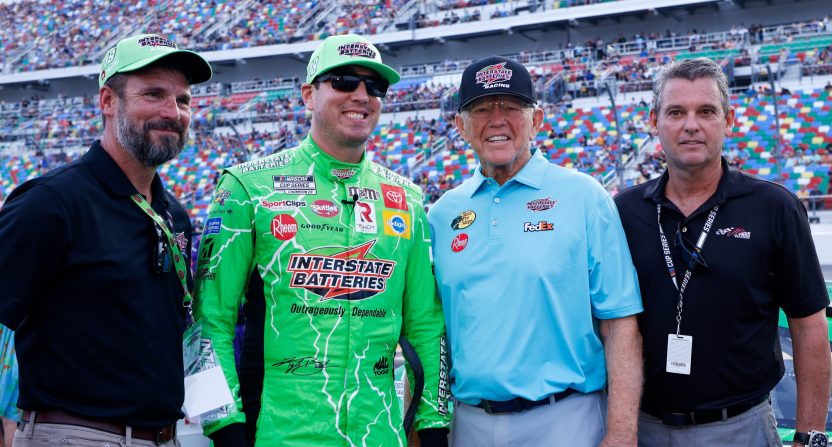 After months of speculation, it became official on Tuesday that Kyle Busch’s time with Joe Gibbs Racing was coming to an end and the NASCAR driver will move to Richard Childress Racing in 2023.

In his introductory press conference on Tuesday, Busch revealed that his new contract also allows him to race the Indianapolis 500 for a Chevrolet-supported team. As part of the announcement, he took a swipe at Joe Gibbs, owner of his long-time NASCAR team.

“I can do it. Any Chevrolet IndyCar teams, call me up,” Busch said according to Matt Weaver of Racing America, adding that his wife was fine with that and “the only guy that said no was my former boss.”

Tuesday, Gibbs released a statement of his own, wishing Busch lots of success and taking the high road.

A note from Coach Gibbs on the recent @KyleBusch news. pic.twitter.com/y7yWRq2jGR

“Kyle has been a major part of our history and success at Joe Gibbs Racing. We are thankful for all his contributions to our organization over the years,” Gibbs said. “When you look at all that he has accomplished already, it is truly remarkable, and we know someday we will be celebrating his Hall of Fame induction.”

While some would argue his best days are behind him, Busch is one of the most successful NASCAR drivers racing today, having won 56 races under the Gibbs umbrella, not to mention being a two-time Cup series champ.

I find this decision to let your best ever driver walk to Chevy, and place a ridiculous amount of pressure on your grandson to step in and compete right away, to be a really stupid decision. But, I'm not in charge and that's just my opinion

Imagine letting your greatest ever driver go at 37 in nascar. Shocking https://t.co/7oRZwQpHCA

This is a huge loss for @ToyotaRacing and @JoeGibbsRacing. I just don't understand how they could not get it done. And it's going to hurt both organizations for years! https://t.co/KQ4dKL4B2f

That's how to handle your driver's announcement to leave the organization https://t.co/bgHZw3et12