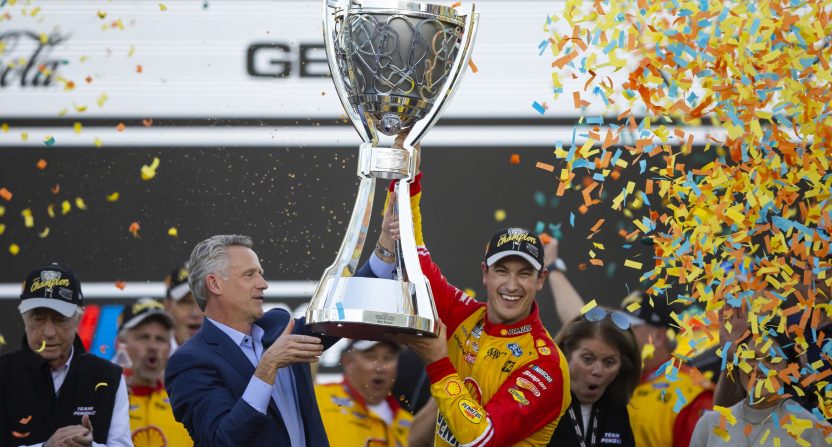 Joey Logano is back on top of the NASCAR racing world.

While the race was largely dominated by Logano, all four drivers were up toward the front. But at Lap 200, chaos centered around two of the four Championship 4 contenders. Elliott and Chastain got together on a restart. Elliott was understandably upset but video showed he wasn’t 100% clear on Chastain and Chastain didn’t lift, resulting in the crash.

Elliott continued running but he fell a lap down and ran slower than the three contenders. Elliott was later praised for not getting his payback on Chastain later in the race, as Chastain passed Elliott, when Elliott easily could have.

Not long after, Christopher Bell reported that he was losing engine power. Bell was racing with a heavy heart after Joe Gibbs Racing co-owner Coy Gibbs unexpectedly died the night before the race. Bell’s engine issues were temporary but he never could get back up to Logano.

Chastain got up to third place but Logano was just too strong. Logano cruised to victory.

"I never been truly this ready for a championship race and we did it."@joeylogano was all smiles after winning the @NASCAR Cup Series Championship. pic.twitter.com/2HAmcEYYSA

Many within the NASCAR world discussed Logano’s title win, congratulating him on being a two-time champ.

In 2005 I interviewed a 16-year-old Joey Logano for a piece on SpeedChannel. It was about “future stars of @NASCAR ”…I would say I nailed it! Congrats champ! @joeylogano 🍻

Congrats to @joeylogano and the entire Logano family. Cool to see the kid from CT celebrating with lil Hudson.

I don’t know how to explain this but it always seems like when joey logano wins a race there’s more confetti in victory lane than any other driver. does joey just happen to win races that award more confetti? does someone supply extra confetti? many questions pic.twitter.com/uxW4hDGo5H

Joey Logano is a two-time NASCAR champ and celebrated with an intense burnout. The smell of rubber is strongggg pic.twitter.com/Dv26TV4igH

Joey Logano bookends the 2022 NASCAR Cup Series season with victories at the Los Angeles Coliseum and Phoenix Raceway and told us in the media that he was the championship favorite every step of the way.

The unflappable Joey Logano just strangled any potential late drama out of that race. Two titles now for the savvy veteran who was once the can’t-miss kid. See you in Daytona!