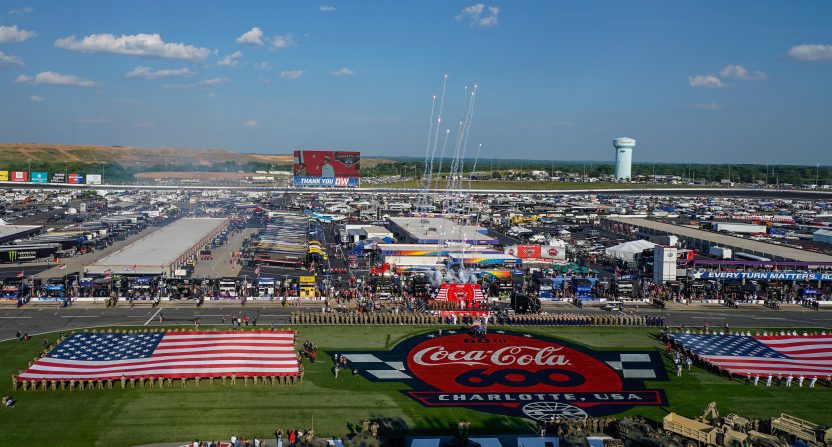 Memorial Day weekend evokes many feelings but the feeling of remembrance is there for everyone. Memorial Day is about remembering those from the military who gave their lives for our freedom. That doesn’t mean we can’t enjoy things this weekend like go to cookouts, drink some beer, and go to sporting events but there are some things that are more important than that which should be kept within perspective.

NASCAR does many things to honor the military but they really go above and beyond on Memorial Day weekend. From prerace demonstrations to a midrace moment of silence that NASCAR started this year, NASCAR makes sure those who have been killed in combat are never forgotten.

One such initiative is “600 Miles of Remembrance,” where each Monster Energy NASCAR Cup Series car honors someone from the military by putting their name on the windshield during the Coca-Cola 600. Usually, those who are honored have a connection of some sort to the team honoring them and that’s the case with JTG Daugherty Racing.

Drivers Chris Buescher and Ryan Preece honored SFC David Moore and SPC William Jeffries on their #37 and #47 cars respectively. Both served in the Indiana Army National Guard with Buescher’s head engineer Brian Burns. “Brian Burns has been my engineer since I started at JTG Daugherty Racing, and we’re like a big family on our No. 37 team,” Buescher said. “It’s hard to put into words how special it is to have SFC Moore’s name on our car for 600 miles and pay tribute to someone who is an extension of our own family here.”

SPC Jeffries had been in the Air Force for 10 years before going to the National Guard. Jeffries was killed in Kuwait in 2003 during Operation Iraqi Freedom. “Anytime I’ve ever seen William in a group, he was always the guy with the big cheesy grin on his face,” Burns told The Comeback. “You’d be walking up to him and he had a face that made you think ‘What’s he up to?’ Just a pleasant person to be around.”

SFC Moore was in the National Guard for 20 years and served tours in Bosnia, Kuwait, and Iraq and died in 2008 due to complications of being exposed to chemicals while serving. Burns spent more time with Moore because Moore was his platoon sergeant and thanks to him, Burns learned what a leader was due to Moore.

“David Moore is somebody I worked a lot more personal with. He was my platoon sergeant for some of the time when I was in there and he was kinda like the wise owl; he had been in there for a long time. And we just got in there as young guys so he was the one that kinda took you under his shoulders and took care of his guys. [David’s] probably the first guy that I really thought about what it is to be a true leader and how you take care of people and what that means. He was a good example of that.”

Burns himself served from 1993 to 2001 with Moore and Jeffries before going into motorsports. Burns was in a military family and that has always been a part of his life but he went in the military as a means to go to college thanks to his G.I. Bill. And while he went into the military in order to go to school to gain a higher education and pursue a career in motorsports, Burns also learned a bunch thanks to his military service.

Burns said, “When I was in high school, my dad came to me and said ‘I know you want to go to college. In case you didn’t know, we don’t have a lot of money so you have to figure out a way to make that happen.’ So I started looking around at ways and I’ve always been patriotic. My dad was in the military, my grandpa, so that runs deep in the family.”

“I think I grew up a lot quicker than some people just at a younger age like that. When I was in the 11th grade, I was shipped off to boot camp that summer between by 11th and 12th grade year of high school. When a lot of people were going on spring break or Cancun or Daytona, I was being introduced to my first drill sergeant. It’s a culture shock for some people but I think it’s something that made me stronger.”

While Preece got caught up in a late-race crash and finished 31st, Buescher finished sixth, despite a blown tire early in the race. But even though one team did well and the other didn’t, there comes a point where some things are more important than who wins and loses and while we’re free to enjoy the pleasures in life, this weekend is a time to put things in the right perspective and remember why we can.