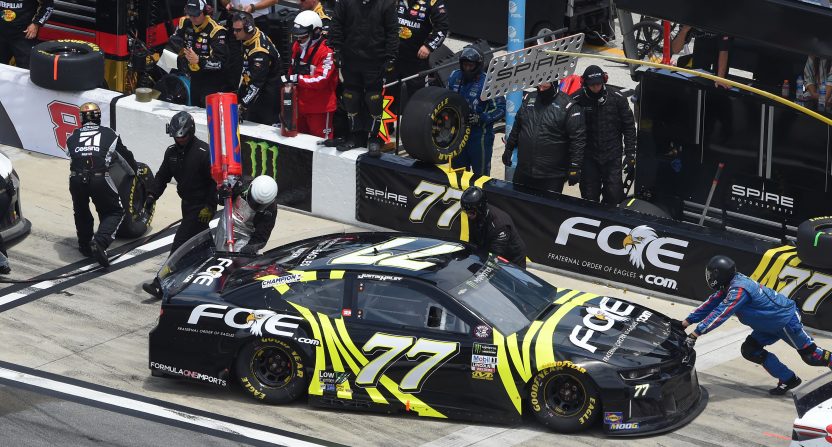 There have been some massive upsets throughout NASCAR history but this may be the ultimate. They may be the first ones to tell you they got a bit lucky but in just his third career Monster Energy NASCAR Cup Series start, 20-year-old Justin Haley and underfunded team Spire Motorsports took the victory at the Daytona International Speedway.

How Justin Haley won is a story that might be turned down by Hollywood because it wasn’t realistic. A multi-car crash caused by Austin Dillon and Clint Bowyer crashed a whole bunch of cars and set up a bizarre sequence of events.

When the big wreck happened that eventually led to the red flag, @Justin_Haley_ was running outside the top 20.

He's the second black car in the rear on the outside at the start of the replay of the wreck. pic.twitter.com/FFlAcNiJU0

Knowing that the rain was coming, many teams had no choice but to enter the pits because they needed fuel to make it to the end of the race. Kurt Busch took the lead and held out as long as possible until teams were given the one-to-go signal. Seeing that, the rest of the field entered the pit thinking that they were going back to green and Haley took the lead. As an underfunded team who knew that rain was coming, their plan was to stay out as long as possible just in case something happened. In between that and coming around to take the green, lightning struck nearby and the race was stopped. After periodic rain and lightning, NASCAR decided to call the race after a couple hours, giving Haley and Spire a huge upset.

Haley was clearly a nervous wreck as he waited for the decision to either continue racing or end it early. When talking to the media, and trying to keep his mind on anything else, his hands were noticeably shaking.

#NASCAR …. ⁦@Justin_Haley_⁩ ‘s hand shaking as he awaits a decision and the possibility he could be declared the winner. pic.twitter.com/zfCW8IjEWz

To say this is a big win would be a massive understatement. For Justin Haley, he has been on the unfortunate end of two penalties that cost him one definite win at Daytona last year, and a potential win Friday night in the Xfinity Series. Both penalties were due to passing someone below the yellow line, something Haley made no secret that he disagreed with NASCAR’s ruling.

I’ve never been penalized so much for racing. I’m literally scared to race. It’s all just a guessing game. At any moment we could get a penalty for anything. I’ve always been on the short end of it. It’s frustrating.

For Spire Motorsports, this new team made its debut this season. Built from the fragments of Furniture Row Racing, Spire is from Spire Sports and Entertainment. A talent management and consultancy company, Spire had an opportunity to run a Cup Series team and took that.

They knew it would be a struggle. The underfunded team had a career best finish of 22nd but routinely finished in the back of the pack. Without the resources of a top team, or even a moderately funded team, Spire Motorsports were just living the dream as best they could hoping for a moment like this. And for a win like this, that will no doubt be massive for an underfunded team like Spire.

Unfortunately, Haley will not be eligible for the NASCAR Playoffs. Haley isn’t in the top 30 in points and he has declared for Xfinity points to try to win that championship. For Spire, they can compete in the owners championship but sit 100 points behind the top 30. They will need to make that up in order to qualify.

Nobody expected Justin Haley to win and even they would probably say they got lucky, but it really doesn’t matter. Yeah, they won in a rain shortened race and everything aligned to allow that but there’s no asterisks and the trophy and prize money are the same no matter what. And while he probably wasn’t expecting it before today, Justin Haley can call himself a Monster Energy NASCAR Cup Series winner.