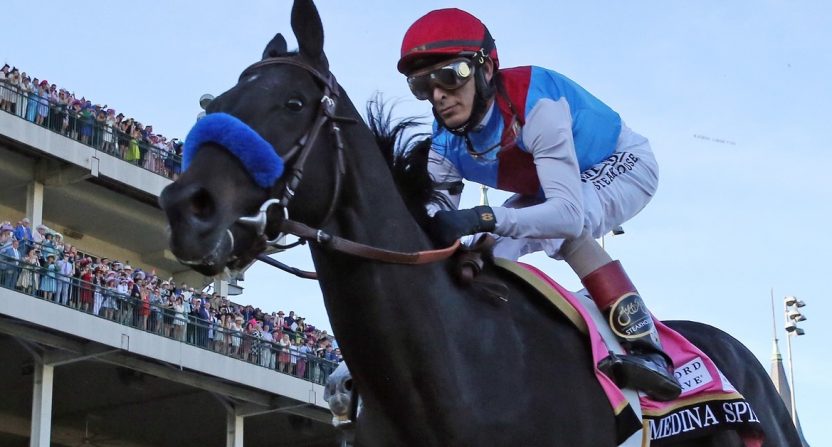 Kentucky Derby winner Medina Spirit faces disqualification and being stripped of the winning title (along with its $1.86 million in prize money) after a positive result on a drug test.

Medina Spirit’s trainer, Hall of Famer Bob Baffert, disputed the results while announcing them during a Sunday morning news conference at Churchill Downs.

Despite the results, Baffert insists Medina Spirit has never been treated with betamethasone. Yet another of his horses, Gamine, tested positing for the same substance after finishing third in last year’s Kentucky Oaks. Gamine was subsequently disqualified, purse money was taken away from the owners, and Baffert was fined $1,500.

Baffert said "he does not feel safe to train," and doesn't know how to move forward knowing something like this can happen (said he's never given Medina Spirit this drug). Said it's a complete injustice and he will fight it tooth and nail. Sending Medina Spirit to Preakness.

Medina Spirit has not yet been disqualified, however, pending results of a split-sample test in which one blood sample is sent to an independent lab for more extensive testing. If those results come back positive, second-place Derby finisher Mandaloun will be declared the winner.

Pending results of Medina Spirit’s split-sample test, Churchill Downs has prohibited Baffert from entering any horses in races at the venue.

“I was totally shocked when I heard this news, Baffert told reporters (via the New York Times). “I’m still trying to absorb it. I am the most scrutinized trainer. And I am okay with that. The last thing I want to do is something that would jeopardize the greatest sport.”

The scrutiny Baffert refers to results from 30 drug tests his horses have failed over the past 40-plus years, including four in the past six months. He’s the most successful trainer in American horse racing, with his racehorses winning seven Kentucky Derby titles and sweeping the Triple Crown events (the Derby, Belmont Stakes, and Preakness) twice in the past five years. However, that success has drawn suspicion from rival trainers.

Baffert said Medina Spirit will still race in the Preakness this coming Saturday. A victory would be the eighth for one of his horses in the event.