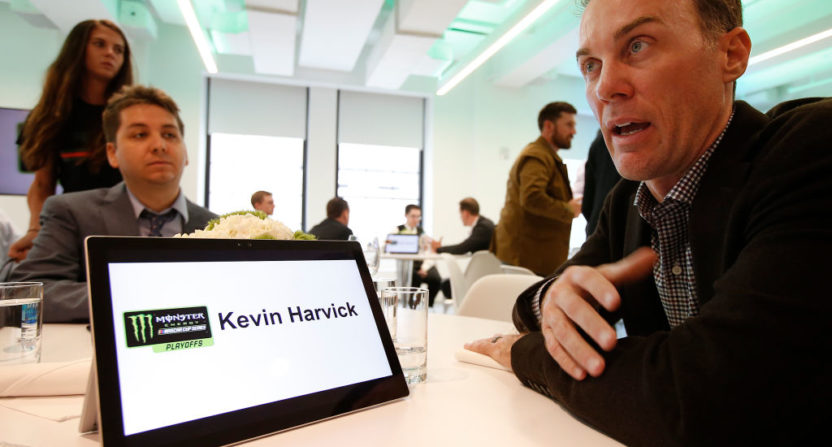 This week is NASCAR Week at The Comeback, where we will post an interview per day as we celebrate the start of the NASCAR Playoffs. Later this week, we will have interviews with Kyle Larson, Kyle Busch, Austin Dillon and Brad Keselowski.

Kevin Harvick has had one of the most difficult starts to a NASCAR career. An up-and-coming driver with Richard Childress Racing at the time, Harvick’s life changed in an instant in February 2001. When Dale Earnhardt Sr. was killed in the Daytona 500, Harvick was moved up to drive in the top NASCAR series and suddenly went from a driver looking to learn to a driver who needed to be a leader among a team which was in mourning and unsure where to go next.

In a white #29 Goodwrench Chevrolet, Harvick may have been racing a different car but he showed some of that Earnhardt magic as he defeated Jeff Gordon in a photo finish to win in his third career start. It was an incredibly popular win and showed the NASCAR community that while the series was at its lowest point, things were going be all right.

This season, after making the switch from Chevy to Ford, Harvick and Stewart-Haas Racing made it into the NASCAR Playoffs with a win at Sonoma. And after making his 600th start this past weekend, the future Hall of Famer has forged his own legacy and is looking to win another championship.

I sat down with Harvick as we talked about the upcoming playoffs, the MENCS championship and his Mobil 1 commercial, as well as his management company.

Phillip Bupp: You’ve been fortunate enough to win both the Daytona 500 and the Monster Energy NASCAR Cup Series championship. Which one is tougher to win?

Kevin Harvick: Ooh, that’s a good question. I think they’re both hard in their own respect, but I would have to say the championship just because there’s so many more races involved in trying to get to that point.

PB: In this situation, you cannot pick your teammate (Kurt Busch). If you don’t win the MENCS championship, who would you most want to see win the championship among the other playoff drivers?

KH: Oh man, that’s a fun one. I think watching and being a part of seeing Jimmie Johnson win an eighth championship would be unique and great for our generation because I think you would then have an argument of being a part of the greatest generation of drivers because of the fact that Jimmie Johnson won his eighth championship. That would be unique.

PB: Now you started in NASCAR as a young man, got married about the same time as your first Cup season and you have a son [Keelan]. Have you noticed your driving style change now that you’ve been in the series for a while and you have a family?

KH: No, I don’t think my driving style has changed. I think you slowly get better because you’re involved in more situations and understand more of how to work with the team and things like that. I think the change that’s most noticeable to me is the fact of how you approach everything, how you manage your time, how you manage your schedule. I can let things go a lot easier than I used to and not pick a battle in every fight. If I pick a battle with my five-year-old all the time, it’s a losing battle. So I just approach it like I’m dealing with a five-year-old.

And it’s been much better because, I had a fan call the radio show [Happy Hours on Sirius XM] Tuesday night and he said, “Man, I noticed that you don’t seem to care as much when you have a bad day and you get out of the car. You know, you don’t throw a fit.” I’m like, yeah, it’s called “maturing.” In life, in general.

KH: Yeah, you just learn how to, I said, “You didn’t see me sitting on the wall for 30 minutes mad at the world.” [laughter] So it’s, you know, I think it’s just learning how to deal with life situations has bled over into those competitive situations. Sure, for the fans that want to see you jumping on the car or punching somebody in the mouth, but all those things just really put my team in a bad spot. My crew chief has to answer all the questions, my guys are reading all the media stuff that gets written about it and it’s really not beneficial. You can still be competitive and not be a nuisance.

PB: Now away from the track, which do you get recognized more for within the past six months, being a NASCAR driver or being in the Mobil 1 commercials?

KH: I’ve been asked more why am I three inches tall, [laughter] for sure. That’s for sure.

PB: You own a management company [KHI Management], how did you get into that and who are some notable clients of yours?

KH: We represent two PGA golfers, James Hahn and Jason Gore. We have Donald Cerrone in the UFC. We have a 12-year-old Motocross rider, Ryder Difrancesco who rides for Kawasaki and Jimmy Johns. We have Harrison Burton, who’s an up-and-coming NASCAR driver. And then we have Shannon Spake [Fox Sports] who we do some of the personal endorsements with.

Really [the company] started when we sold the race teams [Kevin Harvick Incorporated] in 2011. Donald Cerrone came to Texas Motor Speedway and we were just sitting around BS’ing and got to know him. Went to my first fight that same year and watched him fight and one thing led to another and he called one day and said, “Hey, why don’t you guys just represent me?” DeLana and I sat down and talked about it and knew that we didn’t want a race team that had 140 people and required $60 to $70 million in sponsorship to maintain every year. So we started just managing Donald and inserted him into the system of people I had that handled my day-to-day stuff.

And Miesha Tate saw that Donald had a lot of sponsors on his shorts and called us one day and said, “Hey, would you guys be interested in representing me?” And that led to us representing Miesha. She’s since retired, won the [UFC Women’s Bantamweight Championship] belt, retired and now doing her own thing. But it’s really, for us, it was a way to create another business that allowed us to not hire a bunch of people. It’s kind of really only taken two more people than what I had originally, to manage everybody that we have. And it’s something that has made us more diverse from a sponsorship aspect of things because we can add things into sponsorship proposals that everybody else can’t.

Because we have PGA golfers and UFC fighters and have a lot of crossover. If you don’t like NASCAR, fine, we can put you in golf. If you don’t like golf, we can put you in UFC. And if you like everything, we can entertain your customers all over the country and places that NASCAR races aren’t in. We can entertain your customers in places where PGA tournaments aren’t held. So a lot of people like racing, lot of people like to play golf, lot of people like to watch people get beat up, but there’s blue collar companies, there’s white collar companies and I feel like we can appeal to more companies than anybody else and that’s what it has evolved to and makes us unique. When you get a sponsorship proposal, it won’t have just NASCAR racing in it.

KH: First person I thank will definitely be my wife [DeLana] just because of the fact that she has to put up with me every day. And this time of the year, I become pretty short because it’s just that time of year. And she’s grown up in a racing family and been around racing her whole life. I know there isn’t going to be anyone who can handle it any better than she does because she understands it. She wants to see me succeed as bad as anybody but she tolerates a lot over the ten weeks [in the playoffs]. But it’s a great environment for me because she knows.