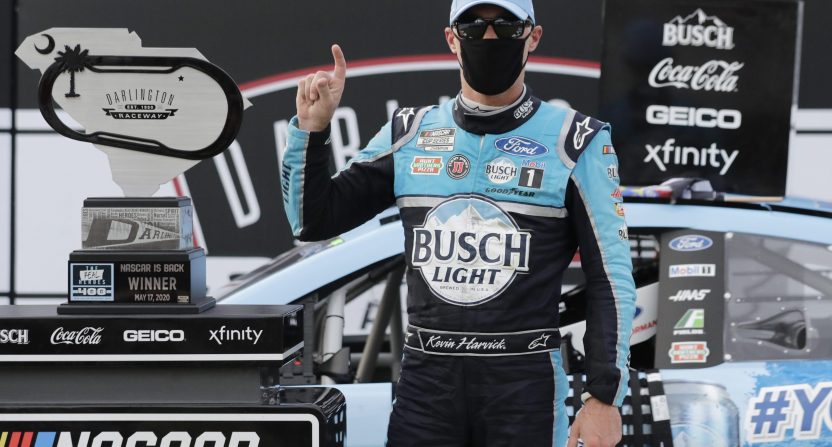 The Cup champ and Daytona 500 winner is coming off his most successful season statistically. Harvick won a quarter of the races over the 2020 season, with all nine wins coming after NASCAR came back from their COVID-19 hiatus. He won the first race back from the break at Darlington and really capitalized on weekend doubleheaders. During the three weekend doubleheaders at Pocono, Michigan, and Dover, Harvick finished first, second, first, first, fourth, and first.

While Harvick scored nine wins, 2020 was his worst points season in five years. Even though he had a massive points lead thanks to leading the points during the regular season, Harvick finished second, 16th, and 17th in the Round of 8, causing him to miss the Championship 4 for the first time since 2016.

Despite that, Harvick isn’t worried about how his season ended and is looking forward to more winning in 2021. Harvick talked to The Comeback about his 2020 season, winning races after turning 40, adapting to change, and his son Keelan going karting.

Phillip Bupp: How’s the offseason been for you?

Kevin Harvick: We’ve been busy. I think for us, we’ve got a lot going on with a number of different things. I spent most of my offseason racing with my son in Florida. So we’ve stayed pretty busy, and I’d rather have it that way. Sitting around is not something that’s really a part of what I like to do. So that kept us busy through the winter.

PB: Now 2020 was a real Jekyll and Hyde season for you… nine wins… but you missed out on the Championship 4. I know you had said you moved on after about a week after the season, so I won’t delve into it too much. But I wanted to know if you were able to bring over some things from 2020 to 2021 that feel can help you and the team?

Harvick: Well, I think any time that you win that amount of races in a season, it’s obviously hard to look back on the season and say you should have done this better, or where you could have done this better. But I think when you look back, obviously, we had a couple of moments there at the end of the year that could have gone a little bit differently. But I think in the end it wouldn’t have really mattered with the way that we ran at Phoenix at the end of the year.

So that definitely took some of the sting away from everything that happened, knowing that probably wasn’t going to end the way we wanted it to anyway. So I think as, as we go back to Phoenix, I think we ran so well at the first one. Didn’t run as well at the last one. And I think that that really has to be something that we hone in on, and make sure that we’re ready to go at the end of the year, at Phoenix.

PB: With COVID still affecting things, from a competitive standpoint, do you feel you’re in a position where you’re more comfortable adapting to sudden changes to the schedule given you had almost a full season of changes?

Harvick: I think that’s something that, for me, I’m always kind of a stickler on, I want to be here. I want to be there. I want to know exactly what time. And as we went through last year, I just kind of threw my hands up in the air and said the heck with it. I’m just going to… When we get through a race day, we’ll see where we are, what we have to do, and understand that things are just going to change as you go through the year.

We’ve already seen a little bit of the effect of that with [Auto Club] Speedway, and moving that race to the Daytona Road Course. And you have to know that there’s probably going to be some things change as you go throughout the year. But being able to adapt to those things, and not get yourself wound up about little changes like that, you need to be comfortable with. Just because of the fact that it’s just going to be the way of life, especially as we get to the first half of this season as well.

PB: Going along with that, I heard something last week where you were talking about how condensed weekends was helping you possibly drive longer. Is that simply due to that it requires less time on the track, or is there more to it than that?

Harvick: Well, it’s like I told people in the past. I mean, it’s not going to be that I’m not capable of driving the car anymore. And when you look back at most people’s careers, really the thing that drives them… they come into the decision of retiring, it was just the fact that they’re tired of the grind. And I think when you look at the way that things have gone over the last couple of years, really before COVID, we had a much better place of being able to limit the grind and still get all of our work done.

So that’s really what it comes down to, is the travel, and how much time you have to be away from your family. And I think, as you look back at 2020, I think everybody realizes that we can be a more efficient sport, and spend less time on the road and at the racetrack, and still put on a great show.

So, I think, yeah. The grind is definitely the part that for me will be the part that probably comes to the point and says, “Well, I need to spend more time at home.” And I’m just tired of the grind. So that definitely changed things, in the way that people look at the things that we have to do, and where we go. Last year, and even the year before, you’re starting to see the schedule’s condensed, and do things a little bit differently when they designed the 2020 schedule. So we’ll see how that progresses over the next couple of years, and go from there.

PB: Well, you’re still efficient. You’re still winning lots of races. I don’t know if anyone’s told you this, but you’re tied with Dale Earnhardt for the third-most wins (27) after turning 40. You’re third behind Bobby Alison (38) and Lee Petty (42). What is it that has you finding the fountain of youth and getting better with age?

So I think when you understand that you have that experience, and you can still find ways to motivate yourself. And every year that motivation comes in different areas. And for me, I’ve always been okay at finding things to motivate me, even on the years when I come into the season and I don’t feel like I’m motivated, there’s always seems to be something that happens that motivates you to do things.

So, I think I have a great team that I get along with really well, with a lot of guys on the team that are very similar life situations. With our kids, and with what we do, and similar in age, and similar background. That you could run a lot of these things by, and your experiences and things that you have are very similar to the guys around you. So they’re very understanding, and when you can or can’t do something, and need to take a break or whatever the case is. I’ve got a group of people around me that are very good at that.

Also the thing that comes with age is the fact that I just feel like our circle of life is very well organized and prepared to adapt and adjust, and kind of keep in line. So a lot of the younger guys will look at you, and kind of with a confused face when you talk about those types of things. But being able to head off problems from a personal side, financial side, professional side, whatever it is, and fix those problems quickly, helps things from turning into a problem.

PB: Now coming up for this weekend, this will be your 20th Daytona 500. You’ve fared well, seven top-fives and a win. What’s your mindset entering Daytona, and your hopes on getting a second win?

Harvick: Yeah. As I look at the Daytona 500, it’s always kind of like feast or famine, right? I think everybody goes there with the expectations of how do I put myself in position to win the race. And then you look at Speedweeks, and it’s such an up and down roller coaster of the highs and lows of what you’ve done, what you’ve accomplished early in the race week, or haven’t accomplished early in the week. And that build up to the 500, so many emotions. And that green flag, taking that green flag is like none other.

So, look, I want to win. I want to win this race and win this race with this group of guys that I work with on the 4 car, and Stewart-Haas Racing, because of the fact that it’s just something that we haven’t been able to accomplish as a group. And I think it’s something that would be a memory that everybody would remember and never forget. And experience, something that not very many people get to experience. So I know what that’s like personally, and I’d love for the group of guys that I work with to be able to experience that themselves.

PB: And after Daytona there’s going to be some new tracks to the schedule, some different layouts, even different surfaces. Which new race are you most looking forward to?

Harvick: I’m actually… I would probably tell you Road America, just because of the fact that I’ve not ever heard one bad thing about anything about Road America. Whether it’s the town, the racetrack, the experience. Everybody you hear that goes to Road America, races a stock car, Indy Car, or go-kart, whatever it is, talks about how great of a time that they had on that particular weekend. So it’s definitely something that I’m looking forward to, and I think it will be a great experience. And I think there’s obviously some other facilities that have come onto the schedule that’ll be fun to experience as well. But that’s the one that I’m looking forward to the most.

PB: I wanted to end on a happy note. Yeah, you mentioned your son is into karting, and you’re with him racing. How’s that been going for him, and what’s the plan this year for Keelan?