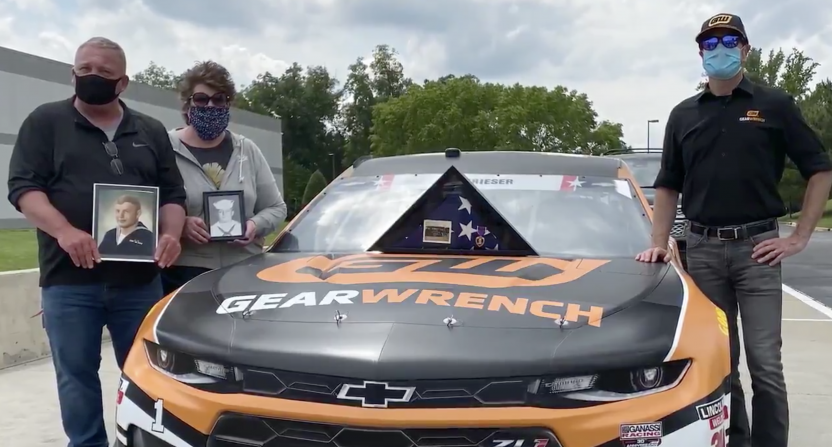 Memorial Day is a time where we remember those who made the ultimate sacrifice over the years. Whether it’s a family member, a friend, or an acquaintance, many of us know someone serving or who has served. And unfortunately, some of them never came back home.

NASCAR always has veterans and the fallen at the forefront of their thoughts but they really step up during Memorial Day weekend. At the Coca-Cola 600, drivers had a midrace moment of silence at halfway which was especially poignant this year without fans.

Another program NASCAR does within the Cup Series is their “600 Miles of Remembrance” initiative. The driver name, which is usually on the windshield is replaced by a service member who had been killed in action. Usually, people who are honored have some sort of connection with the team who is honoring them.

At Chip Ganassi Racing, Coca-Cola 600 pole sitter Kurt Busch honored Construction Electrician Petty Officer Second Class Phil Grieser from the US Navy by having his name on the #1 GearWrench Chevrolet. CE2 Grieser served in the Vietnam War with the father of Doug Newell, an electrician tech at CGR. Within weeks of returning home from Vietnam, CE2 Grieser was killed in a rocket attack in May 1969.

While fans were unable to attend the Coca-Cola 600 due to the COVID-19 pandemic, Ganassi’s team did the next best thing and invited Grieser’s family to come to North Carolina a few days before the race to see the car in person. Busch surprised the family as he and Phil’s brother Mark unveiled CE2 Grieser’s name on the windshield. Busch told The Comeback, “I’m happy that there’s a connection between an employee and our race car and the program… It’s nice that we’re able to honor Phil in this way.”

Busch added, “We’ll push other things aside and we’ll go above and beyond to make sure that we’re there to salute and to recognize anybody who has served and [600 Miles of Remembrance] is a perfect opportunity and a genuine one with being Memorial Day.”

Kurt Busch has been heavily involved in recognizing and honoring veterans for years. He’s visited wounded soldiers at Walter Reed National Military Medical Center and has hosted active and retired military and their families at the track. Through a program called Vet Tix, Busch has donated 100 tickets per race to the organization in order to provide active, retired, and military families a nice day at the track. Busch noted that people like Dale Earnhardt Jr. and Jimmie Johnson, as well as sponsors, have followed suit and estimates that “anywhere between 100 and over 1,000 tickets available for our military at NASCAR races.” Whenever fans are able to attend NASCAR races, Busch plans to maintain that initiative.

Busch knows how to keep things in perspective. While Busch does something for a living that many people dream of and it’s something that results in fame and prestige, he realizes that what he does may not be possible without the military doing their job. And due to that, he appreciates any time he can hear the experiences and stories of someone who served for their country.

“I’m in awe of the commitment level, for training, and the time away from home,” Busch said. “I feel very committed to my craft but it’s nowhere near a percentage of what they gave to their specialities. And so there’s that genuine respect that goes back and forth.”

“[Hearing stories from military members is] a humbling experience. The conversations are deep. The amount of trauma that they’ve been through and the experiences but also the intellect of who they are as a person and what they survived and how they learned from it. They’re great mentors, I believe, in so many different ways to the general population that that’s why they always deserve to be honored.”

Representing CE2 Grieser, Busch qualified on the pole for Sunday night’s Coca-Cola 600. He led the first 54 laps and finished seventh in a race won by Brad Keselowski.