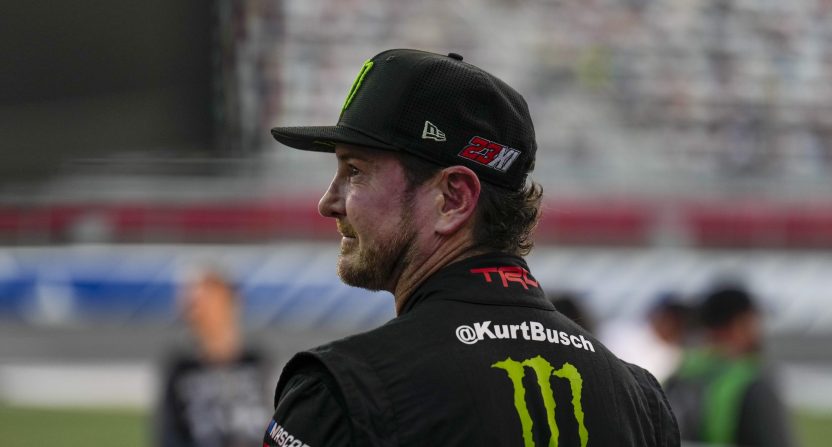 Kurt Busch is in the midst of his 22nd season in the NASCAR Cup Series and while that doesn’t make the 44-year-old the oldest driver on the circuit, it does seem to be making him ponder when he’ll run his final race.

The 2004 Cup Series champion has openly discussed retirement before, saying before the 2021 season that there was a 50-50 chance he might retire afterward. But he did return and even earned his 34th career Cup win at Kansas Speedway, which moved him to 25th all-time in NASCAR Cup Series wins history.

Busch, who drives the No. 45 23XI Racing car for Michael Jordan and Denny Hamlin’s team, stopped by CBS Mornings on Thursday and hinted at the impending end of his historic racing career sooner than later.

To celebrate NASCAR’s 75th season, professional drivers are expected to head to Chicago next summer for the first-ever street race in NASCAR Cup Series history.@KurtBusch says the race is an "unprecedented, bold move" for his sport — and shares why it may be his last lap. pic.twitter.com/gChP1yJcTU

“I’ve been in this sport 23 years, and this, to me, is like one of those kid-in-the-candy-store moments of, ‘I wanna be part of this.’ And I’m glad that I’m having the chance to drive next year for the team, and I might be done driving after that,” said Busch.

That’s a bit of a change from recent comments in which he planned to continue racing even though 23XI Racing had signed Tyler Reddick for 2024 and also has Bubba Wallace locked down next year.

When pressed on what he might have in store after 2023, Busch shared that a lot of it will depend on whether or not sponsorship comes together.

“There’s a few different options, and for me, the team that just gave me so much respect about a month ago. They said, ‘You can drive as long as you want to drive for us. We really appreciate you driving.’

“Well, we needed to start to look at who the next new talent is, where the sponsorships are. … We just signed a new guy, Tyler Reddick, to 23XI, so we’re building.”

The thing for Busch is that it will depend on how any sponsorship deal comes together now that Mars is ending its deal. Joe Gibbs Racing, which partners with 23XI Racing on its cars, said he’s surprised that they’ve been unable to find a sponsor as of yet.