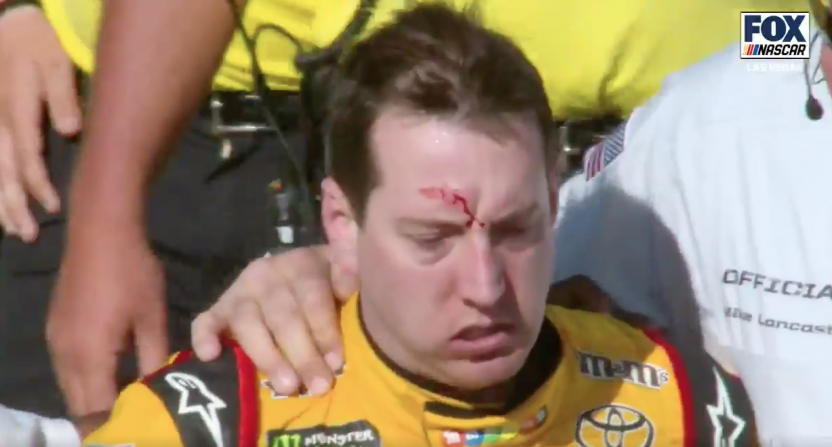 In Las Vegas, your luck can change in the blink of an eye. That’s what happened to Las Vegas native Kyle Busch at the end of Kobalt 400 Monster Energy NASCAR Cup Series race.

With a couple laps to go, race leader Brad Keselowski was developing a problem and Martin Truex Jr. pounced. As Truex drove on for the win, Keselowski was falling back and was getting passed by more cars. Entering turn 3 of the final lap, Kyle Busch and Joey Logano (Keselowski’s teammate) drove underneath Keselowski’s Miller Lite Ford.

Busch cut down and almost ran into Logano as they went three wide (never a good idea). Logano hit the apron and moved up into Busch, spinning him out and costing him valuable points.

Obviously, Busch took offense to this and in the heat of the moment, got to Logano for a pretty intense fight. Fox missed most of the fight but thankfully NASCAR reporter Jeff Gluck captured the entire thing.

As you can see here, Busch got a pretty decent punch into Logano before Logano’s crew members tackled Busch to the ground. Logano was pulled away and after some struggling, Busch eventually left with blood running down his face.

In his postrace interview, Logano said that he was being pinned down to the bottom by Busch and claimed it was unintentional. But knew that Busch obviously thought it was. The clip doesn’t say but Logano claimed that he didn’t get hit in the fight (although the video above would say otherwise).

In Busch’s postrace interview, Busch said he “got dumped” by Logano and it appears Logano is due for some payback in the future.

I have to say first, credit to Fox’s Vince Welch for getting with both drivers that soon after what happened. As far as what happened and who was at fault, it’s a cause of two drivers racing hard toward the checkered flag. Joey Logano races hard and he could sometimes get close to that line of being dirty but even he wouldn’t intentionally wreck someone for 3rd place. Maybe if it was for the win, but not 3rd.

For Kyle Busch, he has every right to be that upset. It’s his hometown and he hasn’t had a great start to his season. Busch even had a power problem halfway through and overcame that to be in the top five. Now, in the final turn, he falls from 3rd/4th to finishing 21st. I don’t know if Busch is going to change his view and that it’s a symptom of hard racing or still believe that Logano intentionally wrecked him, but this may be a new rivalry in the Monster Energy NASCAR Cup Series.