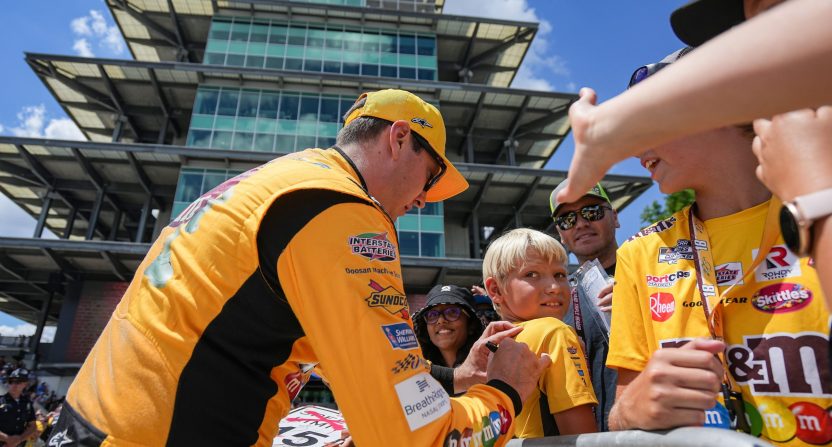 Kyle Busch is the hottest NASCAR free agent in recent history. What seemed unthinkable a few years ago, Mars leaving the sport has resulted in the #18 Toyota needing sponsorship money and Busch’s NASCAR future is currently unknown.

Joe Gibbs Racing have indicated they want to keep Busch, Toyota wants to keep Busch, and Busch himself said he’s willing to take a pay cut to stay. But despite the united front from all sides, circumstances may keep that from happening.

As a result, while he seems sincere in wanting to stay at JGR, Busch has to keep his options open just in case things don’t work out and revealed he has been having discussions with other teams about racing in the future. According to The Athletic’s Jordan Bianchi, those “familiar with the situation” feel that two teams have broken from the pack and are the “likeliest” to sign Busch.

The first is rather obvious. Stewart-Haas Racing has been a team many have pointed to as a potential destination for Kyle. Mainly because they are one of the few four-car teams in the Cup Series and that two of their rides are potentially open for 2023. Aric Almirola has said that he plans to retire after this season, though it’s reported in the same Athletic article that it’s possible he could stay in the #10 Ford. Cole Custer is currently in the final year of his contract in the #41, a car that Kyle’s brother Kurt drove.

The second team is a bit of a wild card. Kaulig Racing is a team on the rise and already has a win in the Cup Series. They are ambitious and signing a multi-time champion like Kyle Busch would really put them on the level that they could compete. The issue is that both team owner Matt Kaulig and team president Chris Rice revealed to The Athletic they haven’t spoken to Busch or his people about driving for them. Who knows if there’s any truth to this bit of speculation but those in the know certainly thinks it could happen.

That’s kind of where we’re at with Kyle Busch. While it gets more and more likely with each passing day, I’m still in the camp of Kyle staying with JGR. The Athletic article has a lot more info on other “Silly Season” news including reports on Almirola, Custer, Noah Gragson, future 23XI Racing driver Tyler Reddick, and current 23XI Racing drivers Bubba Wallace and Kurt Busch.