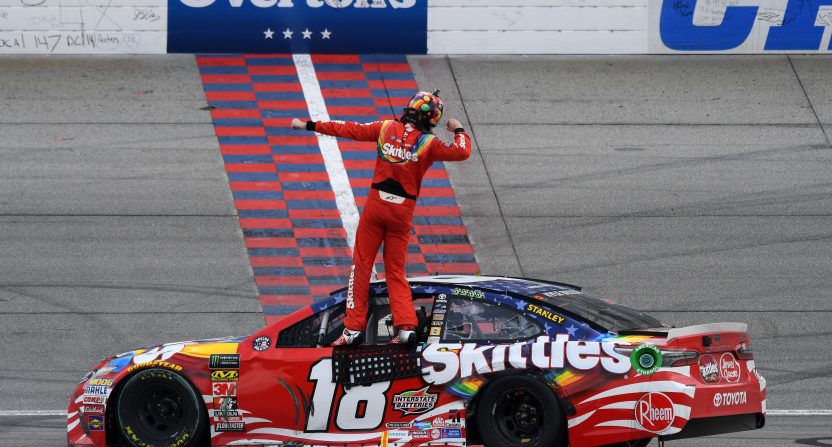 NASCAR fans got the best finish of the year at Chicagoland Speedway yesterday. That’s not exactly the thing one would say at a 1.5 mile “cookie-cutter” track like Chicago but sometimes the situation presents itself and we see a classic.

Kyle Busch was leading and seemed well on his way to winning the Overton’s 400 but lap traffic and a hard-charging Kyle Larson caught up to him. The finish was something we’ll be talking about for a while.

Let's watch this incredible finish again, shall we? @KyleBusch vs. @KyleLarsonRacin. EPIC. pic.twitter.com/zWzx851ATh

This was the kind of hard racing fans have wanted to see for so long. The kind of physical door handle to door handle racing that legends like Richard Petty, Cale Yarborough, Darrell Waltrip and Dale Earnhardt could appreciate and the kind of racing that can get butts in the seats and in their living rooms.

But as Kyle Busch got out of his car, he heard nothing but boos. Just a few short months ago, fans seemed to warm up to the polarizing Busch after burying the hatchet with Dale Earnhardt Jr. on his podcast but people seemed to forget about that.

Like a pro wrestling heel, Busch used that reaction against the Chicago fans and played it up by mimicking them crying and gave a rather blunt response saying, “I don’t know what you all are whining about but if you don’t like that kind of racing, don’t even watch.”

What a rebound, and what a finish. @KyleBusch addressed the fans booing him, and talked about the last lap battle between him and @KyleLarsonRacin. #NASCAR pic.twitter.com/S21yXSRuqH

I’m not Kyle Busch’s biggest fan. I appreciate and respect his driving ability and when he retires, will go down in history as one of the greatest. But at the same time, I don’t always like his demeanor. He can act like a brat and can be a sore loser and I’m not going to defend everything he does.

However, when it comes to this, I have no problem with Busch giving it back to the fans like this because booing that finish seems like an contradiction to what so many fans want to see. Fans are free to cheer or boo whoever they want and that’s perfectly fine but we got into a territory where fans actually got what they said they wanted and still didn’t like it because their driver didn’t win or the driver they don’t like did win. And those two things are separate from each other.

What Kyle Busch said should be a wake up call among many dissatisfied fans to look in the mirror and ask themselves why they are dissatisfied. There are more reasons why someone could be dissatisfied, but in terms of the actual racing, is it an issue where there are too many races on boring tracks where the leader can stay ahead of the pack because they’re in clean air and there isn’t any compelling racing or great finishes? Or is it an issue where the driver I don’t like wins all the time? NASCAR can try to work on improving the first part but they can’t do anything with the second part. And if the fanbase keeps saying it’s the first part where it may subconsciously be the second part, like it seemed to be in Chicago, then NASCAR is making changes just for the sake of making changes and that could hurt the sport more than help.

I can’t deny that if the roles were reversed, Busch wouldn’t have handled the loss the same way as Larson did. I’m sure Busch would have been fine with it the next morning but I doubt he would have gone to Victory Lane right after to offer his congratulations to Larson. At the same time, that doesn’t invalidate what Kyle Busch said after getting out of the car. I’m all about growing the sport and getting as many people watching as possible but if you’re still not satisfied after seeing that, why are you spending your Sunday either hate-watching on TV or spending your hard-earned money going to a race? I’m not saying you need to be a Kyle Busch fan but it’s at least a finish worthy of some appreciation. And finishes like that, regardless of who wins or loses, is something we need more of in NASCAR.