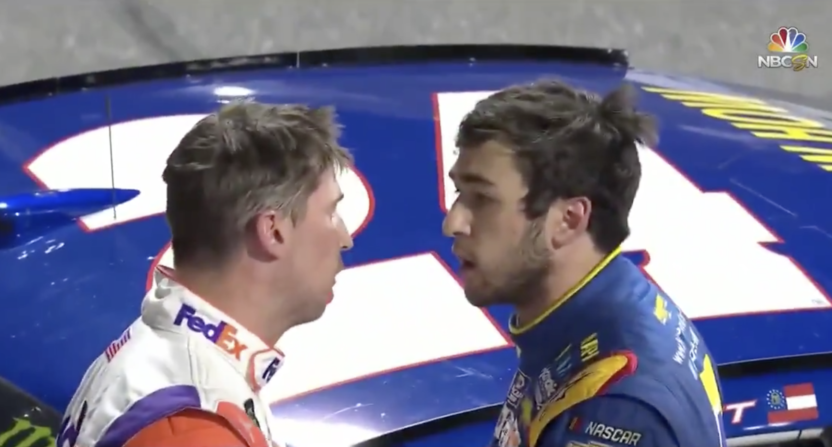 The Monster Energy NASCAR Cup Series Playoffs brings excitement and we sure got excitement under the lights at Martinsville. As the season winds down and more drivers get eliminated, it gets pretty cutthroat for the four championship spots at Homestead.

The action started on lap 496 of the 500 lap race. Brad Keselowski had the lead and Chase Elliott was second. Joe Gibbs Racing teammates Denny Hamlin and Kyle Busch had the next two spots. Elliott had the inside line on Keselowski, carried a bit too much speed and got into the side of Keselowski’s car.

That was wild but that was nothing compared to what happened a lap later. As Elliott was leading, Hamlin got into the back of Elliott’s car and spun him in the wall.

Wow. What a wild restart that ends with Chase Elliott in the wall after contact with Denny Hamlin! #NASCARPlayoffs pic.twitter.com/DXDHyzZBBM

Once Elliott was eliminated, it resulted in a two lap duel for the win. Even though they were teammates, Busch and Hamlin needed that win and that spot in the Championship Four so teammates went out the window and they fought for the win. Hamlin left an opening, Busch tapped his teammate going to the white flag and he and Martin Truex Jr. got by Hamlin. Hamlin made one last ditch effort going into turn three on the final lap but got nudged by Clint Bowyer. And in trying to hold his fourth place position, cut in front of Ryan Blaney and turned the front stretch into a junkyard as everyone crossed the finish line.

Oh, and Kyle Busch won and became the first Championship Four driver. That seemed to be overshadowed by everything.

The frontstretch looked like a parking lot, after @KyleBusch won today at @MartinsvilleSwy! #Rowdy18 pic.twitter.com/QrnRZD5FU0

But the action didn’t stop at the checkered flag. Believing he was wrecked (and rightly so), Elliott slammed into Hamlin on the cool down lap and the two had some words at pit entrance. It doesn’t take a lip reader to see Elliott explicitly tell Hamlin, “You wrecked me!”

NBC got to Hamlin and Elliott after the race, making sure their interviews are heard by the fans at the track over the PA system (smart move) and got their thoughts on what happened. Hamlin beat around the bush, first saying that everyone was wrecking everyone and that he didn’t try to wreck him on purpose. And then when asked further, Hamlin remarked about how Elliott’s rear tires were off the ground, indicating that yeah, he wrecked him on purpose because Elliott can’t drive on two front wheels. Fans didn’t really buy Hamlin’s explanation and booed him at his home track. Hamlin is from Chesterfield, VA, near Richmond.

"I'm not sitting here saying that I wrecked him on purpose."

Elliott went with the “If you don’t have anything nice to say, don’t say anything at all” route and wanted to go to Texas. The fans were cheering Elliott throughout.

On to Texas. @ChaseElliott talks about the incident with him and Denny Hamlin. #NASCARPlayoffs #2the4ront pic.twitter.com/DmS5H4aGND

Millions of dollars and legacies are on the line depending on if you win and there is so much on the line. So I’m okay if Hamlin feels he needed to do that if it meant getting the win. At the same time, Hamlin shouldn’t be surprised at what potential consequences come as a result. Because Chase Elliott has a long way to go to get into the Championship Four and if he can’t win a championship, you better believe he will make sure Denny Hamlin doesn’t win it either.