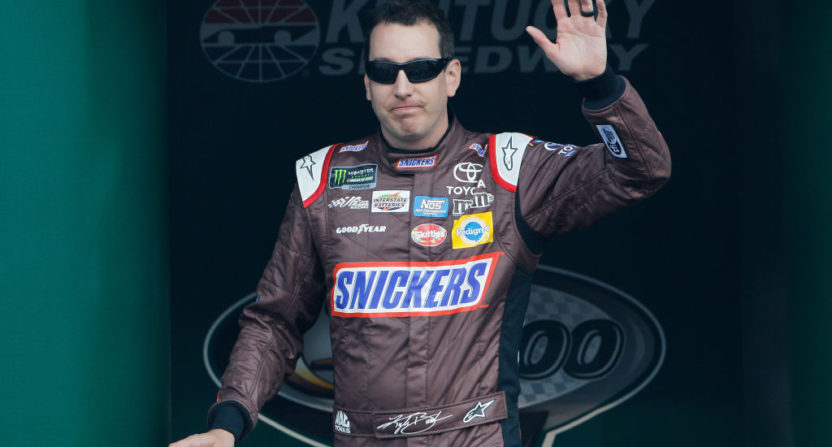 The Indianapolis 500 got a jolt of intrigue this year as two-time Formula 1 World Champion Fernando Alonso raced and impressed in his debut Indy Car race. The current McLaren driver skipped the Monaco Grand Prix to compete at the Brickyard and led 27 laps before suffering a blown engine with 21 laps to go.

Apparently, Alonso wasn’t the only champion from another racing series that would have been making his debut at Indianapolis. Monster Energy NASCAR Cup Series champion Kyle Busch revealed that he had a deal lined up for the Indy 500 but his “boss” kept him from racing.

“I had it done last year – sold and everything ready to go – and I’ve got a boss that said no,” Busch said. “Figure it out. I’ve got two bosses – ones a male and ones a female. I would certainly. I thought that I had a great opportunity to do it.”

According to Jeff Gluck, Samantha Busch, Kyle’s wife and the “female boss” that Kyle referred to, said it wasn’t her. So that leaves his “male boss” and that would be his team owner Joe Gibbs.

There are two primary reasons why Gibbs would resist in letting Busch race the Indy 500. One, Busch was in a serious crash in an Xfinity Series race at Daytona where he broke both his legs. And two, Busch would have to race for either Chevrolet or Honda since they’re the only two engine makers in the IndyCar Series. Busch drives a Toyota in NASCAR so they may not be that happy to see Busch represent Chevy or Honda.

Busch said he was fortunate that he didn’t race because Alonso coming over would have overshadowed his debut.

“I’m kind of glad it didn’t come together because of Alonso kind of stole the headlines the last time it was done,” Busch said. “But, you know, there may be more in the future guys coming over to run that race, so, you know, I may have to split the limelight if you will with somebody else that kind of wants to do that race, but I think it’d be fun.”

Busch’s brother Kurt, himself a former champion as well as this year’s Daytona 500 champion, raced at the Indy 500 in 2014, finishing 6th. Kurt would pull off the “Memorial Day double” and raced in both the Indy 500 and Coca-Cola 600 in Charlotte, NC on the same day. Busch wound up encountering problems and finished 40th in Charlotte.

I think it would have been great if Kyle raced at Indianapolis and considering he’s one of the more hated as well as talented drivers in NASCAR, branching out into IndyCar and attempting the Indianapolis 500 would help him in both aspects. Kyle is 32 so he has plenty of time to compete in the Indy 500. Kyle is trying to be the first driver to win three consecutive Brickyard 400 races so a run in the Indy 500, or even a potential win, would really cement Kyle’s legacy as one of the best drivers in history.