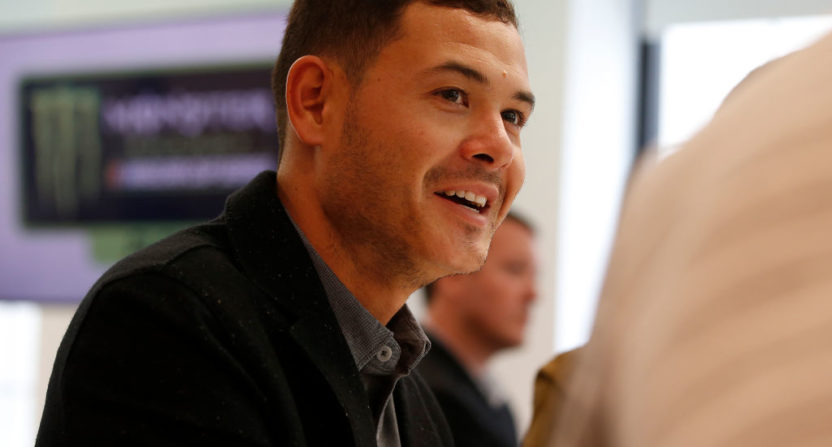 This week is NASCAR Week at The Comeback where we will post an interview per day as we celebrate the start of the NASCAR Playoffs. Click here to read our interview with Kevin Harvick. Later this week, we will have interviews with Kyle Busch, Austin Dillon and Brad Keselowski.

In just his fourth season, Kyle Larson has become a dominant force in NASCAR. The 25-year-old fared reasonably well in his first couple years but Larson really broke out in 2016, where he made the best of a bad restart to win his first Monster Energy NASCAR Cup Series race at Michigan to put him in the playoffs. Despite being eliminated before the final race, Larson pushed hard and finished runner-up to champ Jimmie Johnson at Homestead, giving the rest of the series notice as to what they could expect in 2017.

Kyle Larson’s 2017 season started in a 190 mph fuel mileage race. After leading the final lap of the Daytona 500, Larson fell less than two miles short on fuel and resulted in him getting passed for the lead and the win coming out of Turn Two. But if there’s one thing you need to know about Kyle Larson, it’s that he can persevere. After his close finish at Daytona, Larson finished second in three consecutive races. Except for winning, there wasn’t much Larson could do in the beginning of this season. But that hard work paid off as Larson won at Fontana after those three consecutive runner-up finishes.

Along with Martin Truex Jr., Kyle Larson has been the driver who has consistently been on top of the running order just about every week. Despite having a penchant for winning at two-mile D-Oval’s Fontana and Michigan four consecutive times, resulting in his first four wins, Larson had performed well at just about every type of track. Now, he comes into the NASCAR Playoffs with 33 playoff points, second to Truex. And after winning at Richmond to close out the regular season, Larson enters the playoffs with all the confidence in the world. But even if he doesn’t win the championship this year, Kyle Larson has already showed that he will be a contender for years to come.

I met with Larson as we talked about the upcoming playoffs, sprint car racing, Chip Ganassi and finally winning at a place other than Fontana and Michigan.

Phillip Bupp: Congratulations on winning at Richmond this past weekend. I’m sure that winning at Fontana and Michigan is great and all but how gratifying is it to win at a place that’s not a two-mile D-Oval?

Kyle Larson: Thank you. Yeah, it was good to win at a track other than a two-mile but especially at a short track where I feel like I struggle at. We’ve been close to winning at every track, really. But for some reason, we’ve only won at those two-mile tracks until now so hopefully that gives us some momentum and confidence going into the playoffs.

PB: Now you have competed in the Daytona 500 as well as for a championship, which do you think is the toughest to win?

KL: I would probably say a championship because it’s all season long. Daytona is just one race and while I’ve never won it, I was really close to winning this year; I just needed a bit more fuel. But I don’t know, every race is really hard to win. The Daytona 500 is no tougher than any other race. And if anything, it’s almost a little easier than others because you don’t have to have the fastest car. You just kind of have to get lucky at the right time.

PB: In this situation, you cannot pick your teammate (Jamie McMurray).

KL: Make sure you let Chip [Ganassi] know that because he might get mad if I don’t pick him [laughter].

PB: [laughter] Don’t worry, I’ll include that. Other than McMurray, if you don’t win the MENCS championship, who would you most want to see win the championship among the other playoff drivers?

KL: I don’t know, that’s a tough question because [laughter] I’d want to pick the easiest drivers but I don’t want to make anybody mad so I’m not going to answer that.

PB: You race sprint cars in your free time. I live about 20 minutes or so away from Williams Grove Speedway and saw that you pretty much dominated the field during PA Speedweeks this summer. Does racing sprint cars help you improve as a driver on the weekend or is it a nice hobby to take in on your off time?

KL: Yeah, I mean, I love it. So it’s probably more so a hobby and kind of me getting away from NASCAR racing. But I also believe it definitely helps me on Sundays, racing NASCAR. Getting laps in any race car is a big benefit and then especially when I run good enough, that it can only add to your confidence on Sunday for the NASCAR stuff. So we had a great year in the sprint cars and I definitely think that’s benefitted us this year.

KL: Chip Ganassi, for sure, for giving me the opportunity. Bringing me up from local dirt track racing to the highest level of American auto racing in just a couple years back in 2011 and then 2012 and ’13. So yeah definitely Chip for gambling on me a few years back and for everything he’s done for me.