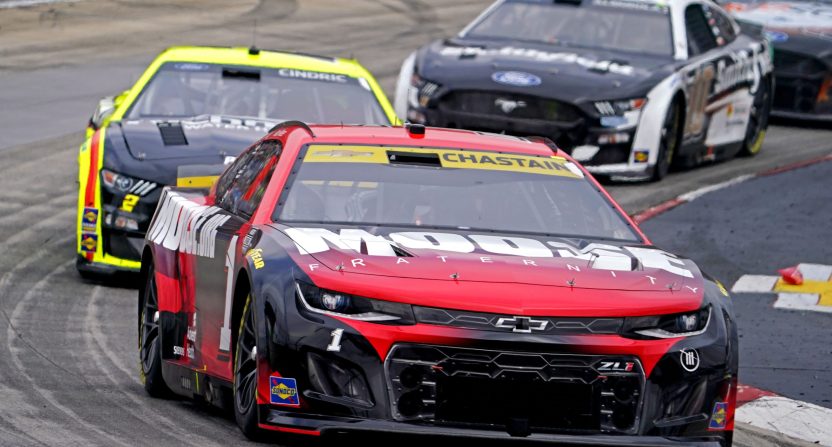 NASCAR driver Ross Chastain wowed fans and home audiences when he made a “video game” move to get into the Championship Four at Martinsville Speedway on Sunday. However, not everyone was a big fan of the move.

In the final lap of the race, Chastain found himself just outside of the final four playoff spots. With nothing to lose, he used a very risky strategy, riding the wall on turns three and four to gain enough points to pass Denny Hamlin, who was holding the final spot heading into the last lap. The move worked as he gained five spots and clinched a position in the final four along with Joey Logano, Christopher Bell, and Chase Elliott.

The NASCAR world went absolutely bonkers over the move, which many said they’d only ever seen work in a video game. However, fellow driver Kyle Larson, who won last year’s NASCAR Cup Series, did not think the move was a good thing for the race or the sport.

#NASCAR … Kyle Larson is not a fan of the last-lap move by Ross Chastain along the wall. Larson said it is “not a good look.” He explains … pic.twitter.com/hfYJa2qEeW

Larson wasn’t alone in feeling like the move was unfair. While Joey Logano said he thought the move was exciting, he was worried about what happens now that other drivers have seen that it can work.

“As spectacular as it was, as much as it worked, the problem is now the box is open, right? Now every Xfinity race, every Truck race, every Cup race, no matter the track, this wall riding is going to be a play. That’s not good. That’s not good,” Logano said.

“I mean, it was awesome, it was cool. It happened for the first time. There’s no rule against it. There needs to be a rule against this one because I don’t know if you want the whole field riding the wall coming to the checkered flag.”

For what it’s worth, a NASCAR spokesperson said Sunday night that Chastain’s move “was within the bounds of the rule book and (officials) will discuss any driver concerns this week.” So don’t expect to see too many changes regarding it just yet.