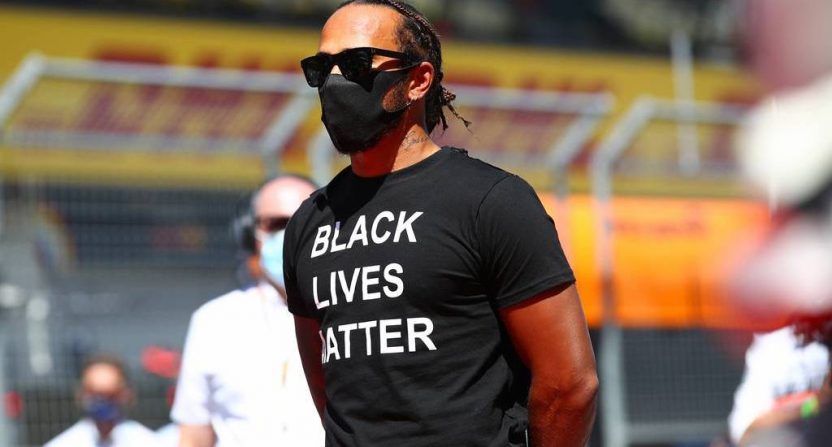 When Michael Schumacher scored his 91st and final Formula 1 victory, many felt that was an unbeatable record. The year after Schumacher retired (for the first time) came a highly talented upstart named Lewis Hamilton and he scored wins left and right. Over the next 14 years, Hamilton would get multiple wins each season and matched legend after legend on the career wins list. The last legend was Schumacher and in his 261st career start, Hamilton matched Schumacher’s record at Schumacher’s home track at the Nurburgring.

Like in most F1 races this season, Mercedes was the dominant car but Hamilton had competition from teammate Valtteri Bottas who won the pole and raced Hamilton hard on the start. That lead was short lived when on Lap 12, Bottas went wide entering Turn 1 and Hamilton passed him for the lead. Very soon after, Bottas had a mechanical issue and had to retire.

After that, it was all Hamilton. Max Verstappen was an outside challenger and a late safety car got him close, but it wasn’t enough. Mercedes was in a class of their own, as usual, and captured their home grand prix.

The F1 career wins record wasn’t the only record taken at the Nurburgring. Alfa Romeo’s Kimi Raikkonen broke Rubens Barrichello’s F1 career starts record with his 323rd start. If Raikkonen and Alfa Romeo come to an agreement for 2021, that record will increase for at least another year.

The majority of Hamilton’s 91 wins came in what’s called the “Hybrid Era” of Formula 1. That was when Mercedes really shined and became the dominant team and Hamilton was the beneficiary. Since 2014, Hamilton won 68 of 126 possible starts during that stretch. To put that in comparison, third on the wins list is Sebastian Vettel with 53 wins in 13 years. Hamilton got 68 in six years. Hamilton can break the wins record in two weeks at the newly scheduled Portuguese Grand Prix at Portimao and he can match Schumacher’s record of seven Formula 1 World Championships later this year.

Where does this rank Lewis Hamilton among the all-time greats? It’s tough to say. There’s Fangio, Clark, Hill, Stewart, Lauda, Prost, Senna, and Schumacher for sure. One can make an argument that the drivers from yesteryear, when the average F1 season didn’t have as many races and the longevity of an F1 career wasn’t nearly as long due to fatal accidents, they could’ve had a shot at getting as many wins as Schumacher and Hamilton had they raced in this era. But what Lewis Hamilton is doing, both on the track and with his activism as the first Black Formula 1 driver in history, he certainly is making a case as being the most influential driver in Formula 1 history.