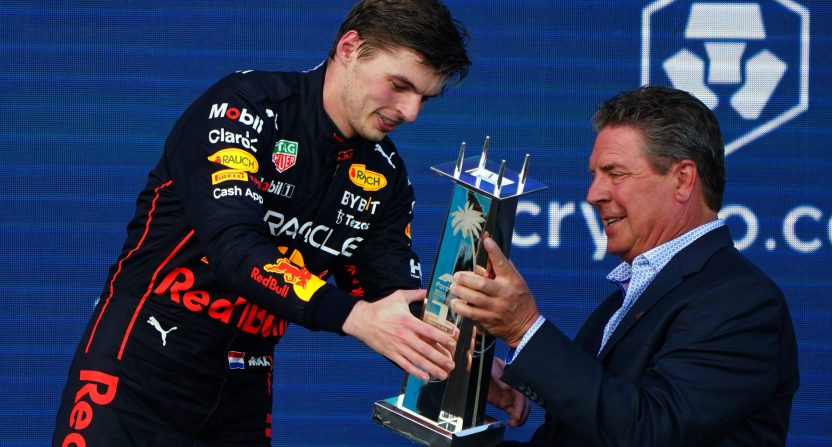 Memorial Day Sunday is one of the best days of the year for racing fans. Three of the most prestigious races in the world are run on the same day with Formula 1’s Monaco Grand Prix in the morning, IndyCar’s Indianapolis 500 in the afternoon, and NASCAR’s Coca-Cola 600 in the evening. Monaco and Indianapolis constitute racing’s “Triple Crown” along with the 24 Hours of Le Mans, which is in two weeks.

With three top races happening on the same day, drivers are asked about if they would ever attempt one of the other series. Formula 1 World Champion Max Verstappen, who has previously won at Monaco, was asked about that and he was rather blunt about not racing at Indianapolis.

“I’ve no desire to chase the Triple Crown. At least, not Indy.”

“I appreciate what they do. It’s insane, these drivers. … I have a lot of respect for what they achieve there, but for me, especially being in F1 for such a long time already, I don’t need to risk my life there and potentially injure myself, your legs, whatever.

“It’s just not worth it anymore, let’s say like that.”

Verstappen’s Red Bull teammate Sergio Pérez echoed similar statements and if you were to poll the F1 paddock, most would say the same thing. With 240 mph top speeds and being inches away from the wall, learning how to race on an oval with a new car can be a daunting task on top of the added risk of danger. That being said, there is a notable Formula 1 presence at the Indy 500 each year.

There were five former Formula 1 drivers racing at Indianapolis this year, including winner Marcus Ericsson. The other four consisted of 2000 and 2015 Indy 500 winner Juan Pablo Montoya, 2017 and 2020 winner Takuma Sato, 2016 winner Alexander Rossi, and Indy 500 rookie Romain Grosjean. Grosjean moved to IndyCar in 2021 and chose not to race on high speed ovals. This season, Grosjean is racing a full season, which includes ovals.