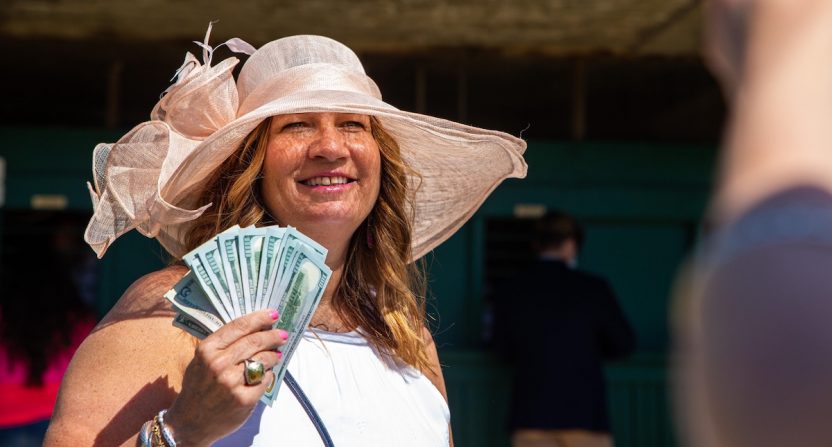 With 2021 Kentucky Derby winner Medina Spirit in danger of being disqualified and having the title stripped away following a failed drug test, should anyone who won money from the Derby results be concerned that their winnings will be taken away. Should those who bet on second-place finisher Mandaloun expect to collect instead?

No, a possible disqualification and subsequent title being awarded to the runner-up won’t affect any betting results. For one thing, Medina Spirit hasn’t yet been disqualified, pending the results of a second sample sent to an independent lab for testing.

As the New York Times‘ Victor Mather explains, it would just be too difficult to track all of the wagers and winnings placed on the Kentucky Derby. Off-site venues and internet gambling have vastly increased the number of gamblers participating in such events.

“Once the money starts getting handed over, it becomes impossible to track. Derby bettors have long since folded up their cash, or maybe spent it on a round of drinks. And who’s going to be the person tasked with walking up to Lefty or Cincinnati Joe and asking him to give back that $20 he just pocketed?”

The race was declared official, making the bets final. Winnings were collected. Tickets were torn up. Such a circumstance probably shouldn’t be a surprise to anyone familiar with sports betting. For example, anyone who bet on Louisville to win the 2018 NCAA Tournament didn’t have to give back their winnings when the school vacated its championship victory.

"We live in a different world now. This America's different." pic.twitter.com/bsQeiV7oXi

Trainer Bob Baffert also says he would appeal such a decision, which could tie up the process for quite some time. And what if Medina Spirit was again awarded the victory as a result of that appeal? Mather reminds readers that disqualifying Dancer’s Image as the 1968 Derby winner because of illegal drug use took four years to resolve.

In the meantime, Baffert is making a media tour to argue his case that Medina Spirit did not take any banned substances and that there’s a conspiracy to discredit him. The acclaimed trainer appeared on Fox News and  The Dan Patrick Show to claim that this was an example of “cancel culture.”

Baffert also made another claim that will probably live in sports infamy for years to come, sure to be referenced whenever an athlete tests positive for performance-enhancing substances.

Baffert says one test issue was created by a groom urinating in the stall after the groom had been taking cough medicine. Horse ate some of the hay.

Has the door been opened for baseball and football players, along with Olympic athletes, to claim that their food was tampered with? (Let’s guess that no one will claim that anything they ingested was urinated upon, although it probably shouldn’t be discounted as a possibility.)