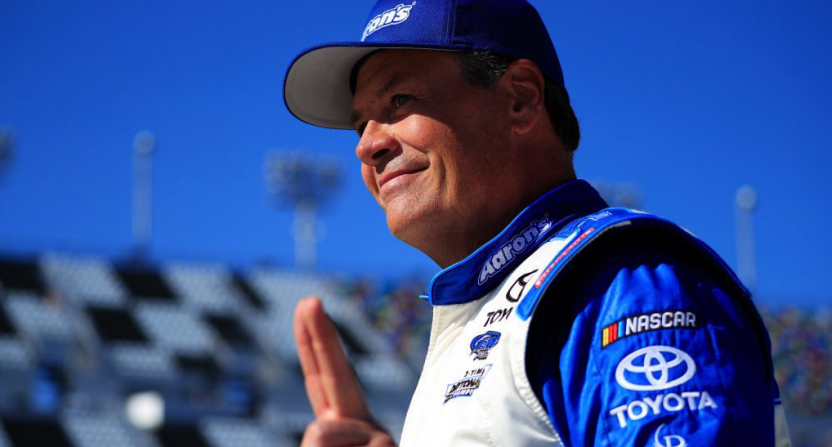 The city of Las Vegas is reeling after someone killed over 50 and injured over 400 more people at the Route 91 Harvest Festival, a three-day Country music outdoor concert. While we ask ourselves how this can keep happening again and again with people in Vegas donating blood and everyone doing what they can, many who were there or knew people who were there are making sure everyone they know is safe.

One such person is former NASCAR driver and current analyst Michael Waltrip. The Camping World Truck Series was in Las Vegas Saturday night and Waltrip was there broadcasting the race with Fox Sports. Many NASCAR people were in the area and/or at the concert. Waltrip revealed that he was going to go to the concert but decided not to and turned in early.

The morning before the shooting, Waltrip met a family who asked to take a pic with him. They got to talking and found out that the family was going to the concert to celebrate their daughter’s 21st birthday. Waltrip posted on Instagram his story of the family he befriended and is now praying to find out they are safe.

Yesterday morning in Las Vegas, at the MGM, I met a man who was a fan. He asked me if it was ok if his daughter took a photo of us. They were in Vegas celebrating her 21st birthday. The whole family was in town, wife and sister too. Daughter was happy and excited to be headed to the concert. Route 91 was the reason she chose Vegas for her 21st. As they walked off I smiled and I was a bit sad too. My daughter Macy turned 20 just a couple days before and I couldn’t be with her. His daddy daughter time made me a bit envious.

At 4:45 this morning I was awaken by my phone ringing. It was Macy. ‘Are you ok dad?’ She asked. I was. I didn’t attend the concert as I had planned to. I called it an early night. After we shared our ‘I love yous’ and hung up the phone the first thing I thought of was the dad I met with his daughter. I prayed they were ok. I have no way of knowing if they are safe or not. I can’t stop thinking about them. So much joy, such beautiful family time and then….. This is my personal story to the unthinkable attack last night. I know there are many more who are hurting. I pray for everyone.

To the first responders that helped save lives and comfort the hurting, thank you. Your courage and commitment is amazing. I appreciate each and everyone of you.

My heart hurts for all who were effected by the horrific tragedy. I pray for everyone involved. Fortunately, friends that I know who were there are all physically ok. The emotional scars will likely never heal.

To the father I met who was doing what every dad dreams of, being with his girl celebrating a significant moment I will do all I can, pray.

Waltrip mentions something that we don’t tend to think of and kind of gets lost within everything. While we mourn those who were killed and hope those physically injured pull through to make a full recovery, it’s everyone who was at the concert and those who know them who will also be forever affected.

I am heading to Las Vegas next month to celebrate my 30th birthday and it might be easy for me to say that I’m going to have fun and not let this affect me living my life. But it probably won’t be easy for those who were there that weren’t shot to mentally be able to go to another concert or large event for fear this could happen again. Everyone processes a traumatic event differently and for many, this will stay with them for the rest of their lives.

Here’s hoping the family who met Waltrip sees his heartfelt message, finds a way to contact him and let’s him know they are all safe.