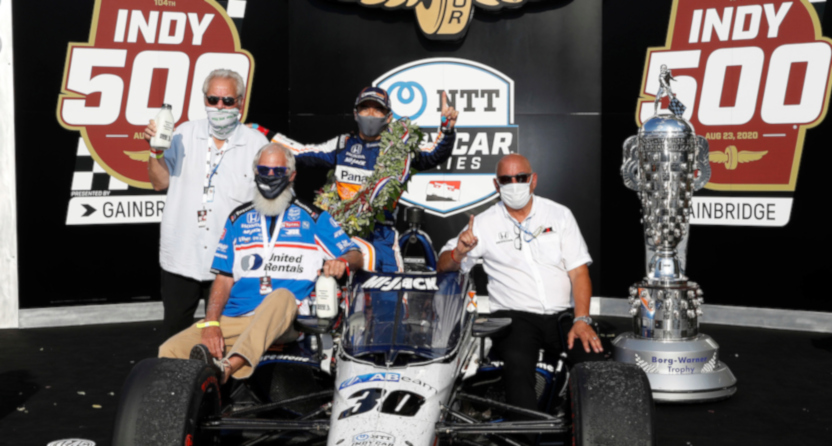 This year’s 104th running of the Indianapolis 500 was quite different than most, with it taking place at the end of August rather than in May and with no spectators allowed at the track. It also saw a notable breakthrough for team owner Mike Lanigan.

Lanigan’s Mi-Jack construction company started sponsoring CART cars in 1992, and he got involved in team ownership in 2001 with Conquest Racing. He then moved to Newman/Haas/Lanigan Racing in 2007, and then joined forces with former Indy 500 winner Bobby Rahal and talk show host David Letterman in 2010 for Rahal Letterman Lanigan Racing. (This year, Lanigan picked up his first Indy 500 win as an owner, with driver Takuma Sato taking home the title in the #30 car and fellow RLL driver Graham Rahal (Bobby’s son) finishing third in the #15. Lanigan (seen above at left with Letterman, Sato, and Bobby Rahal) spoke to The Comeback last week, and said watching his team’s drivers pull that off was a thrilling moment for him.

“It exceeded expectations, especially coming in first and third. It was bucket list; I was hoping someday to be able to win, and so I’m on a high right now.”

Lanigan said the protracted lead-up to the Indy 500 always builds anticipation, and that anticipation was especially high this year with his team’s cars performing well in qualifying.

“Generally speaking, the Indy 500 is part of a month-long scenario at the speedway, and with practices and qualifying, there’s your anticipation of winning. …And you’re there to win, you’re not there to come in second or third. But everything has to be perfect. This race can actually be very cruel; you can have the best car on the track, but if you’re in the wrong place at the wrong time, you can get in trouble with crashes, which is not an uncommon thing at IMS.”

“But this year, we qualified well, we qualified third, eighth and 12th with the three cars we entered. [The third one was driven by Spencer Pigot, who crashed on lap 195.] So the expectations were a lot higher this year; we knew we had good race cars. But you never know until the race starts.”

Lanigan said both Sato’s and Rahal’s cars were running perfectly on the day, though.

“It was a special day. The pit stops were great, and the car handled well; you know, the car can change from one day to another, one hour to another in terms of the handling. And we got that figured out. The #15 and the #30 car were basically the two fastest cars on the track at the end of the race, and that’s what you hope for every year, but that doesn’t always happen.”

Open wheel racing may come with some chaos, but Lanigan said it’s a sport he loves being involved in, and this Indy 500 win was a particularly special moment for him. He’s spent decades in the sport and seen plenty of highs, but an Indy 500 win is special.

“It’s the fastest cars in North America, upwards of 230 miles an hour. It requires the most skilled drivers in the world and the bravest drivers in the world. A lot of drivers and teams have tried to win this thing over many, many years. And I feel thrilled to have this kind of year at the Indianapolis Motor Speedway.”

“It’s the most famous race in the world. It’s a race that’s been going on for well over 100 years, and one of the prizes that is rare to achieve. You know, in a normal year without COVID-19 going on, there will be close to 400,000 people at the racetrack. It’s the largest one-day sporting event in the world.”

Lanigan is hoping that this win won’t be a one-off for his team, though.

“We want to win it again next year, hopefully with all of our friends and family at this thing. It was kind of eerie this year. And it’s the only [Indy 500] race I hope that we won’t have fans at. But it was special in its own way.”