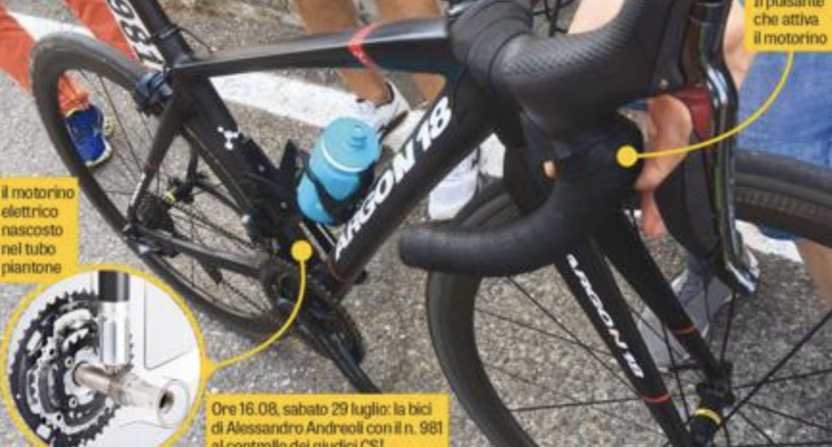 Motodoping is back. A 53-year-old Italian cyclist was speeding along at upwards of 30 miles per hour during a race, garnering suspicion. Race organizers found what looked like “a fire” in the seat tube, according to Italian newspaper La Gazzetta dello Sport, but now the rider, Alessandro Andreoli, has given an interview denying everything unconvincingly and claiming that officials were tipped off about his supposed motor because his competitors are jealous.

Jealous not because Andreoli is winning a lot more races while supposedly motodoping. Jealous because his life as a tiler has allowed him a wealthy lifestyle. Here’s what he told La Gazzetta dello Sport, as translated by Cycling News:

“I had a back problem and couldn’t move. I’ve solved the problem and I’ve been training well. It seems I’ve annoyed someone. They’re envious of my excellent lifestyle. I’ve been a tiler for a long time and earn a lot.”

Andreoli went on to say he never put a motor on his bike, which he claims he bought from a random stranger while on vacation in Tuscany:

“I don’t remember his name or his phone number. We met out on the road, I liked the bike, he asked a great price and so I bought it.”

Andreoli didn’t even win the race in which he was caught, finishing in third. After the race, judges questioned him about a button on the right handlebar that could, in theory, start a motor.

Andreoli claimed there was no button to begin with, and then declined to let the judges dismantle the bike to search for the motor because he had to run off to a wedding.

“They say I had a hidden motor. If it’s true then the riders who finished with me had motors too. I’ve seen a lot of people finish ahead of me without them suffering.

“I had to go to a wedding and it was getting late. I didn’t admit anything. They looked for the buttons but didn’t find anything, the only buttons I have are to change gears.”

Motodoping doesn’t happen often, but could be a potential issue. Officials can usually tell if someone has a motor on their bicycle using infrared cameras, hence why officials saw a “fire” underneath Andreoli’s seat. It’s usually very tough to get away with motodoping so that’s why cyclists don’t usually attempt it. Pro cycling had its first confirmed case in the 2016 Cyclocross World Championships in Belgium, when Femke Van den Driescche was caught, fined $20,000, and banned from the UCI for six years.