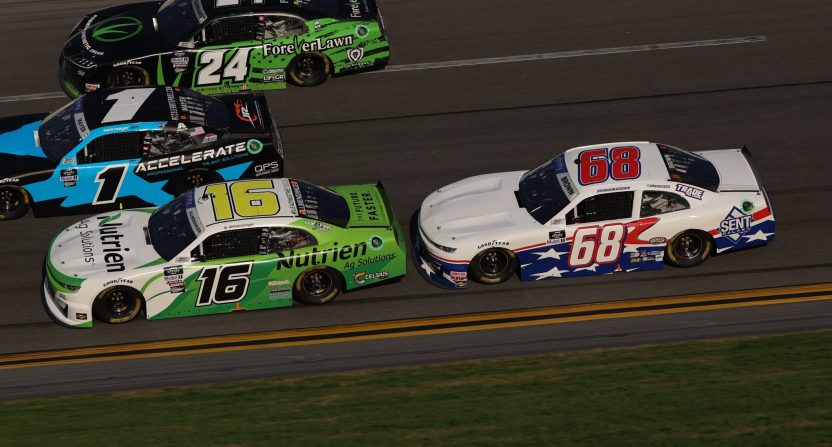 NASCAR driver Brandon Brown found fame and short-term financial success in embracing the right-wing “Let’s go Brandon” slogan that originated around him in October. Less than a year later, however, it might have a lot to do with why he’s going to have to pare back his racing schedule.

Brown will not race his No. 68 car for Saturday’s Xfinity Series race at the Indianapolis Motor Speedway and is unlikely to appear in too many races the rest of the season as his team attempts to find drivers who have sponsorship deals. As for Brown, a failed political cryptocurrency deal built around the right-wing phrase has left him without much funding.

While Brown will be appearing this weekend in a backmarker car, he recently explained that he’s making room so that his team is able to continue competing.

“I’ll be back in the No. 68 for a handful of races,” Brown told Frontstretch. “Definitely Daytona [International Speedway]. I’ll be in the No. 68 in the post-season at Talladega [Superspeedway].

“Other than that? Nah, not really. The team is working on trying to sell some rides to other drivers to keep the funding, which, as heartbreaking as it is for me, I do understand what they have to do to keep BMS in operation … What it’s going to take to grow the No. 68 is having other drivers coming and finding success in it, too.”

Following Brown’s first NASCAR win last October at Talledega, an NBA pit reporter mistakenly thought the crowd, which was chanting “F*** Joe Biden,” was saying “Let’s go Brandon.” That slogan caught on as a way for conservatives to criticize the President. While the 28-year-old driver initially attempted to stay above the juvenile slogan, he eventually leaned in hard, making a deal with a cryptocurrency called LGBCoin.

Brandon Brown announces he has a full-season Xfinity sponsorship deal from LGBcoin … a cryptocurrency created to take advantage of the Let’s Go Brandon theme. Team says that NASCAR has approved the paint scheme: pic.twitter.com/nagl6s88J8

The cryptocurrency didn’t just fail to meet expectations, it completely died. According to CoinBase, it is now essentially worthless and there hasn’t been a trade involving it since March.

While the move might have made sense at the time, Brown now says that he understands it’s pretty hard to separate himself from the slogan after aligning with it.

“I’m still viewed as a political figure,” he told Frontstretch. “I can be viewed as divisive because of the chant. It’s really hard to convince companies that, ‘Hey, that’s not me. That’s just what the crowd was chanting.’ It does make it hard.”

A lot of people have made a lot of money by cynically going all-in on appealing to right-wing audiences. Perhaps surprisingly, in this instance, it appears to have backfired.