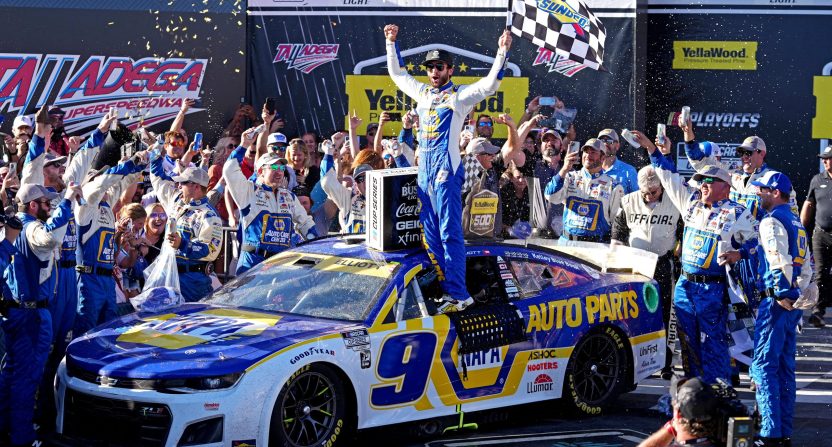 Talladega Superspeedway is generally known to be a crashfest in recent years but the NASCAR Cup Series drivers were on their best behavior as 33 of them were running at the end of the YellaWood 500 with 27 of them still on the lead lap.

It’s been a while since so many finished a Talladega race with clean cars and when it was all said and done, Erik Jones pushed Chase Elliott on the outside to pass the tandem of Ryan Blaney and Michael McDowell to grab his first Talladega win since 2019 and locking himself into the Round of 8 of the NASCAR Cup Series Playoffs.

RETWEET to congratulate @chaseelliott for winning at @TALLADEGA! #NASCARPlayoffs pic.twitter.com/PpuNIoSHYp

There was one big crash back on Lap 25. Ricky Stenhouse Jr. got into the back of Harrison Burton and in trying to push Burton, spun him out. That triggered an eight car crash but other than that it was relatively clean.

One reason for that may have been the fact that drivers have been so vocal about the (lack of) safety in the Next Gen cars. After Alex Bowman became the second driver to miss a race this season due to having a concussion, more drivers have spoken up about how the car is too stiff and any slight hit is more impactful to the driver inside.

Maybe because of this, drivers either consciously or subconsciously decided not to be as aggressive on the track this time. Everyone definitely wants to win but the idea of moving someone out of the way or turning them in order to win might be off the table for now if there’s a real possibility of someone being seriously hurt. Either way, I personally like this kind of racing a lot better.

Many others took notice just how clean the end of the Talladega race turned out to be.

Wow!!!! What a finish and a clean finish. @TALLADEGA

Clean, green and fair finish. That was some good stuff right there.

Incredibly clean race for Talladega, and a solid finish to end it.#NASCAR

Credit to all the drivers at Talladega today, they were going for it almost the entire race and managed to keep it clean outside of one early incident.

Wonderful execution from Chase there. He restarted 5th and got the win.

Dare I say that was a calm @TALLADEGA race. Enjoyed it