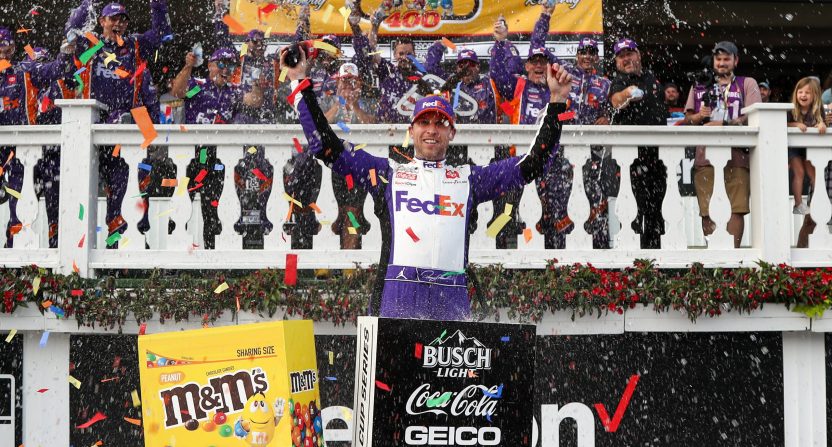 The drama from Pocono Raceway extended far after the race as the top two finishers, Denny Hamlin and Kyle Busch, have been disqualified for failing post-race inspection. Chase Elliott, who finished third, becomes the winner of the NASCAR Cup Series M&M’s Fan Appreciation 400.

NEWS: The Nos. 11 and 18 cars have been disqualified following post-race inspection at @PoconoRaceway. @chaseelliott has been declared the winner of today’s race. pic.twitter.com/KRFaZ4x5hP

NASCAR didn’t get into specifics as they’ll do more research this week at their R&D Center, but Cup Series Managing Director Brad Moran revealed to media that it had to do with the front fascia and how “there really was no reason why there was some material that was somewhere that it shouldn’t have been.” Both cars were guilty of the same infraction and both teams have the right to appeal.

Hamlin and Busch will lose their points and finish 35th and 36th respectively as everyone else moves up by two positions. Ironically, given Hamlin’s ongoing feud with Ross Chastain this season that resulted in Ross being wrecked late in the race, Chastain won Stage 2 via Busch’s DQ.

The news has reverberated on social media as many took notice of the news. Even Denny Hamlin responded.

Yeah, good luck getting that back. https://t.co/f1X8vISlzS

April 17, 1960 at Wilson Speedway was the last time a NASCAR Cup Series win was revoked by a disqualification.

In 1960, Emanuel Zervakis was disqualified for having a gas tank that was too big, giving the win to Joe Weatherly. #NASCAR

Note: This is not the first time the top two finishers were disqualified from a Cup race. At West Palm Beach in December 1955, Joe Weatherly and Jim Reed were DQ'd giving the win to 3rd place finisher Herb Thomas pic.twitter.com/0kolsxy9Up

Denny Hamlin browsing the internet and finding out his W got DQ’d pic.twitter.com/kSndzzDYja

For Chase Elliott this is truly a Mickey Mouse win 🐭 #NASCAR

This is obviously a big deal. It’s been a very long time that a Cup Series driver was disqualified for failing post-race inspection. Joey Logano failed post-race inspection when he won at Richmond in 2017 but while he couldn’t use the win to qualify for the NASCAR Playoffs, he got to keep the win. At least for Hamlin and Busch, their past wins keep them in the Playoffs.