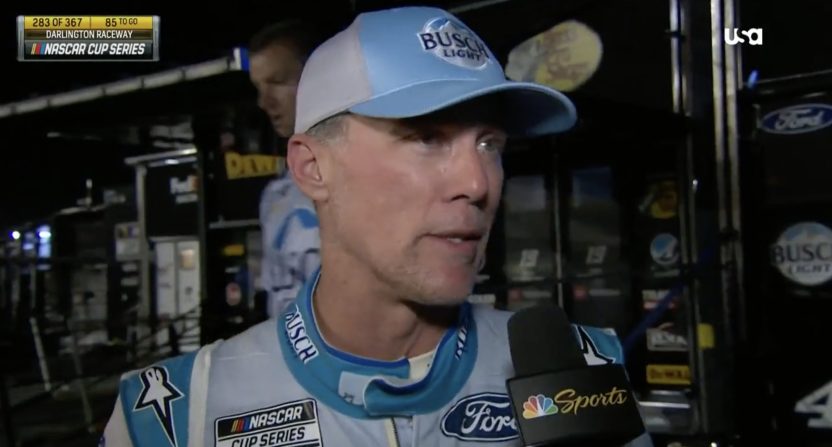 Kevin Harvick has made it clear how he feels about NASCAR’s Next Gen car. Earlier this month, Harvick claimed the car’s problems were the result of “crappy-a** parts.”

“Bristol is definitely a unique load case,” Miller said, via NBC Sports. “Some things cropped up with the steering that weren’t expected. Honestly no excuse, but with the newness of this car and the newness of everything, I think that it’s not acceptable to have problems, but it’s probably part of the learning process for us.”

“All the teams and (manufacturers) were involved in the RFP process when we chose the parts. Everybody’s got a stake in this, and it’s not just NASCAR choosing quote-unquote, crappy parts.”

Harvick has a right to be upset. A fire in his car knocked him out of the NASCAR Playoffs opener at Darlington Raceway earlier this month, prompting his original “crappy-a**” comment. Miller bluntly admitted at the time, “It’s unacceptable for the cars to catch on fire.”

Harvick had more reason to complain this weekend after one of his wheels came off at Bristol, ruining his race and knocking him out of the NASCAR Playoffs. Loose wheels have been a common problem with the Next Gen car.

What more did Kevin Harvick need at Bristol?

"Wheels to stay on.” pic.twitter.com/4MfVaP5BDR

Miller defended the new car and the process that went into designing it.

“With every part of this car actually being a new part and a new design, I think historically in racing, and in any walk of life, when you do something completely new … there’s a learning curve,” Miller said.

“We’re in that learning curve and working really hard to make sure that everything works. I think for the most part it has. … Are we looking to improve on when we have problems? We absolutely 100% are every single day. What happened at Bristol was not acceptable. We will diligently work to come up with a solution to where that doesn’t happen again.”