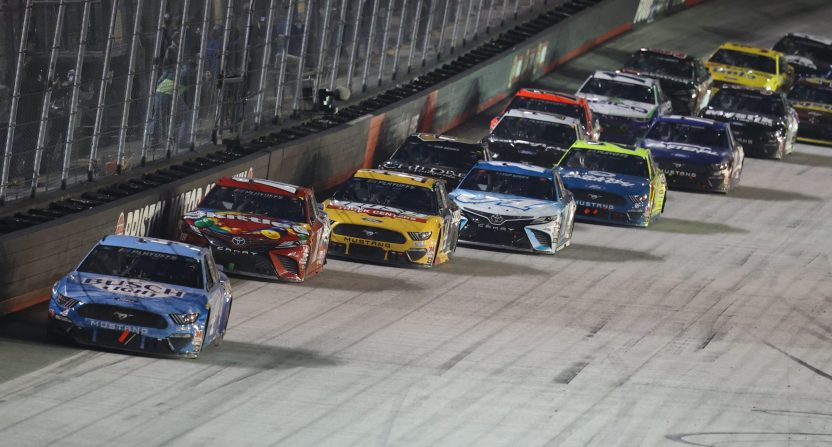 After years of going to the same tracks at the same time, NASCAR promised changes to the 2021 Cup Series schedule. Ultimately, the COVID-19 pandemic forced lots of change to this year’s schedule but 2021 was expected to be the first season with planned widespread changes where tracks would be potentially added.

Change happened as three new tracks have been added and multiple tracks gain and lose dates in 2021. Among the major changes:

– Circuit of the Americas, Road America, and Nashville have been added.
– Indianapolis will be on the road course while Bristol’s spring race will be on dirt.
– Atlanta and Darlington receive a second race.
– Michigan and Dover lose their second race.
– Chicagoland and Kentucky are completely off the schedule.
– Texas loses their second points race but gain the All-Star Race.

This might be the biggest (intentional) change to the schedule in the modern era. NASCAR really made an effort to give everybody what they want and they succeeded. This doesn’t mean everyone will be happy. Obviously, fans in the Chicago area and in Kentucky aren’t thrilled their local track is off the schedule but in a general sense, most fans want fewer 1.5 mile cookie cutter tracks and now two of them are going away. Fans also want more road courses and not only got two new facilities, a boring (to many fans) Brickyard 400 is now on the road course.

Many will point out that if fans wanted fewer races at 1.5 mile tracks, why is Atlanta getting a second race? It’s true that NASCAR cannot operate without the fans and the fans drive the sport but at the same time, NASCAR has to please other groups and if not for them, NASCAR also cannot operate.

Sometimes, you have to please the track owners. To explain Atlanta’s second race, a casino and entertainment center is being planned at the track and that would be huge for the facility and SMI. With lower attendance compared to past years and a lack of ticket revenue this year because of the pandemic, it’s more important for tracks to have other things that can generate revenue 365 days out of the year. Plans for the track include a water/amusement park, shopping center, nightclub, and concert facility. Giving fans more to do at the racetrack better ensures a great experience and an increased likelihood someone would go to a race for the first time.

If I’m a NASCAR fan planning a road trip with friends and my friends aren’t really familiar with NASCAR and wouldn’t pay hundreds of bucks to travel and just go to a race, maybe they would go if they knew they could gamble or go to a concert or play golf in addition to seeing a race. And once they see a race in person, they’re more than likely hooked and will want to go again. Having a second race weekend, where tens of thousands of people will congregate, will maximize revenue for everything around the area and that’ll go further for SMI than if they stayed at Kentucky. And approving a second race now, before the entertainment center is approved, sends a message to Georgia lawmakers to make gambling and sports betting legal and approve the upgrades.

Sometimes, you have to please the TV partners. Bristol racing on dirt came out of left field but according to the Bristol Herald Courier, the dirt race was “thanks in part to pressure from Fox Sports.” Bristol, even in its current multi-lane configuration, provides some of the best racing of the year. Sure, a dirt race is nice, and putting it on Bristol would be an amazing spectacle but it’s not really a net gain compared to what we would’ve seen. Nevertheless, when Fox and NBC are paying billions for the rights to show NASCAR races, they get a say in what they’re broadcasting and if Fox wants a dirt race at Bristol, they’ll get a dirt race at Bristol.

While many will take notice to which tracks have been added or subtracted, there are some more subtle observations to the schedule that may give a sense as to how NASCAR and track owners are thinking.

No midweek races – Because of the pandemic, NASCAR experimented with shorter midweek races and they were fun, ratings took a hit in comparison to weekend races. While there were rumors for a midweek race in 2021, and I maintain that the night after the MLB All-Star Game would be a great opportunity for NASCAR to race without MLB opposition in the summer, that appears to not be the case in 2021.

Fewer Saturday races – I have to go back to 2018 for a non-pandemic impacted schedule but in 2018, there were seven races (including the All-Star Race) on Saturday. In 2020, not counting the Pocono doubleheader, there are four (4/10 Martinsville, 8/28 Daytona, 9/11 Richmond, 9/18 Bristol). While race times haven’t been revealed, this likely means fewer night races next season. Surely, local dirt track owners and fans are pleased with that news.

Brickyard 400 not a crown jewel??? – The only change I personally disagree with is changing the Cup race at Indianapolis to the road course. Yes, there are more exciting races on the schedule than the Brickyard 400 but it was a race that still had exciting action and is really only seen as a terrible race from many because of the aftertaste of the 2008 tire debacle.

The Brickyard 400 was a pillar of the NASCAR schedule for the past 26 years and was considered a crown jewel by many but many didn’t see it like that and the oval is now off the schedule. At least it’ll be a NASCAR/IndyCar doubleheader, which is something that should happen more often. My suggestion has always been to have a doubleheader where the road course is raced on Saturday and the oval on Sunday but for now we’re getting the road course.

Other things like race times and the number of one-day race weekends will be revealed in due time but for now, NASCAR fans and teams have a lot to chew on for the 2021 Cup Series season.