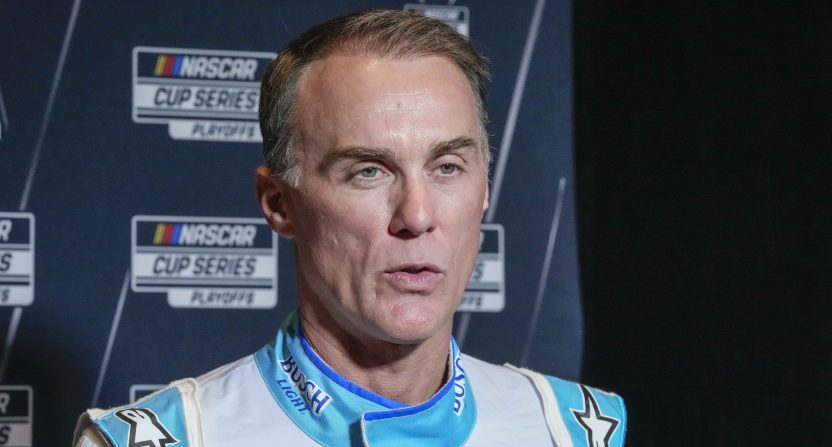 NASCAR announced Wednesday it has suspended Kevin Harvick’s crew chief, Rodney Childers, for four races and fined him $100,000 for a rules infraction.

The L2-level violation involved the unapproved modification of a single-source part on the No. 4 Stewart-Haas Racing Ford. In addition, NASCAR penalized Harvick 100 driver points and SHR 100 owner points.

Childers will be eligible to return for the season finale Nov. 6 at Phoenix Raceway.

NEWS: NASCAR issues a deduction of 100 owner points and 100 driver points to the No. 4 Stewart-Haas Racing team for modifying a single source supplied part.

Crew chief Rodney Childers has been fined $100,000 and suspended for the next four races. pic.twitter.com/J77BVlPt5U

Fox Sports’ Bob Pockrass reported that the parts modification on the No. 4 Ford involved a “modification of vendor-supplied body part that affects the aerodynamic properties of the vehicle.”

Harvick tweeted “Seems strange … ” following NASCAR’s announcement, but it’s unclear whether that was in response to the penalty.

Harvick, of course, has been the most vocal critic of NASCAR’s new Next Gen car. The 46-year-old veteran recently said the car’s problems were the result of “crappy a**” parts. That comment came after his car caught on fire during the Sept. 4 Southern 500 at Darlington Raceway. NASCAR senior vice president of competition Scott Miller admitted at the time, “It’s unacceptable for the cars to catch on fire.”