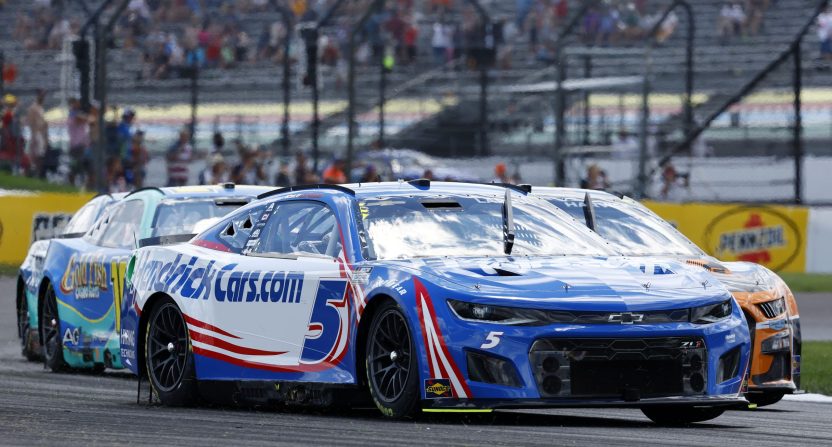 The NASCAR Cup Series took to Indianapolis Motor Speedway on Sunday where Tyler Reddick took home the checkered flag, but Cup Series competitors Kyle Larson and Ty Dillon took the headlines for all the wrong reasons after a crash between the two nearly had disastrous repercussions.

Replay: Kyle Larson slams into Ty Dillon and gets airborne after a brake issue at Indy. Both drivers are okay. https://t.co/2zHKEeRcB0 pic.twitter.com/lRrFDbyec8

It appears that Larson was dealing with a brake issue that caused him to lose control and crash into Dillon at an extremely dangerous speed.

Luckily both drivers were able to escape the collision relatively unscathed, which is shocking considering just how fast Larson was going at the time of the wreck.

Kyle Larson evaluated and released from the care center

.@tydillon has been evaluated and released from the infield care center.

This incident had many around the NASCAR world talking, with many pleased that this didn’t turn out worse than it cleared could have been.

Lord, that right side is destroyed on Dillon's car. Left side damage on Larson.#NASCAR

WOW. Quite literally all gas, NO brakes for Kyle Larson heading into turn 1 & slams into Ty Dillon.

Dillon got out & looked a little shaken. Larson immediately ran over to check on him. Looked like Larson did everything to minimize a wreck that could’ve been WAY worse. #NASCAR https://t.co/j6rmqCvZXj

Dillon discussed the crash during an interview after the scary incident, revealing that it was the hardest he has ever been hit in his career.

“I didn’t see a whole lot. I saw a blue flash and I’ve never been hit so hard in my life. I’m grateful the good Lord’s looking out for me and these cars are so safe.”

An update from the @BlueEmu1 care center with Ty Dillon:

"I didn't see a whole lot. I saw a blue flash and I've never been hit so hard in my life. I'm grateful the good Lord's looking out for me and these cars are so safe." #Verizon200

Things certainly could have been a whole lot worse for Larson if he had hit a wall instead of Dillon’s car bracing most of the impact, and it puts into perspective just how dangerous these races can be if issues occur to an individual’s car.