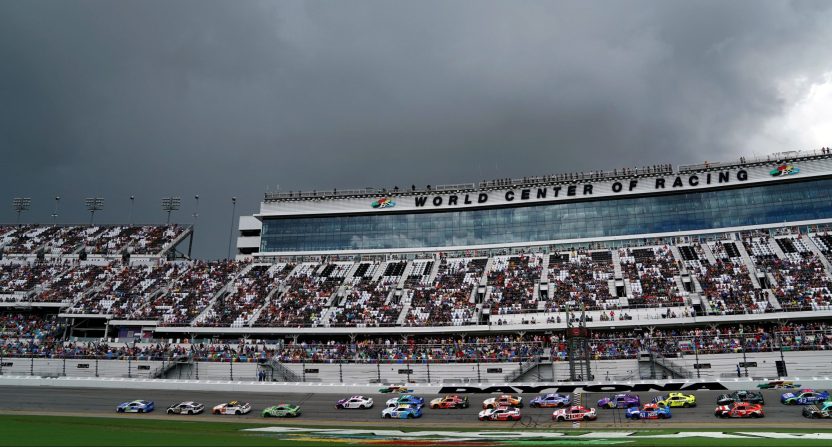 Daytona International Speedway is forever synonymous with dangerous crashes that have have severe consequences for those involved. On Sunday, we saw another glimpse of just how disastrous this course can be.

The NASCAR Cup Series took to Daytona on Sunday for the Coke Zero Sugar 400, which featured a nasty crash involving the majority of the drivers in the race with only 23 laps remaining.

BIG CRASH in Turns 1 and 2 and Daytona!@austindillon3 SOMEHOW avoids all the mayhem and comes out in the lead! #NASCAR

It’s unclear exactly who caused this massive pile up, but it seemed to stem from Daniel Suarez losing control while battling with Denny Hamlin for first place.

Nearly everyone behind him could not escape the carnage in front, except for Austin Dillon, who was in 16th place at the time of the crash.

Dillon caught a huge break to everyone else’s dismay, somehow finding his way through the wreck and emerging as the leader of the race with the red flag being thrown after the crash to bring all drivers into pit lane.

Scott Miller said Austin Dillon is the leader based on the scoring loops and who kept reasonable speed, that those in the wreck are placed pretty much as they get going after being involved in the wreck.

This crash does come with some controversy, with rain coming down at the time of the incident. That has many thinking that the rain made a huge impact on Suarez spinning out.

Someone is likely going to make the playoffs because NASCAR didn't throw a caution for rain. This is ridiculous on multiple levels. https://t.co/Fg3u7qv1JC

Massive accident as the drivers hit a wet track…

Holy crap, that was insane. pic.twitter.com/iNVCib0ZKB

There may be an argument that NASCAR should have stepped in and thrown the caution flag due to the rain, considering this was not the only crash that happened at the event while rain was coming down.

Earlier in the race, with 59 laps to go, there was another accident. That involved a number of drivers, including Martin Truex Jr. and many others.

Martin Truex Jr. is among the many involved in this one at @DAYTONA. #NASCAR

Following the wreck with 23 laps, NASCAR had no choice but to throw the red flag and bring all drivers into pit lane.

Senior Vice President of Competition for NASCAR Scott Miller was asked on the NBC broadcast during the delay whether NASCAR could have done anything differently to avoid the massive wreck. Miller said he didn’t believe there was anything they could have changed.

Hear from Scott Miller, Senior Vice President of Competition for @NASCAR, after the crash that happened as rain began to fall at @DAYTONA. pic.twitter.com/XffVN9r0yw

“I really don’t. We were on top of the weather monitoring it with all of our turn spotters. We had all the information that we thought. We had been dodging a little bit of weather obviously for a little while, nothing has hit and all of the sudden there was a shower right before the wreck.”

The result of this race will have a profound impact on the 2022 NASCAR Playoffs. Sunday’s race is the last of the regular season, and a number of drivers have fighting to get into the playoffs with a win.

While Austin Dillon will be thrilled to likely get into the playoffs due to this wreck (he was 19th in the standings before this, out of the playoff picture), others will certainly be shaking their heads after this controversial race on Sunday.