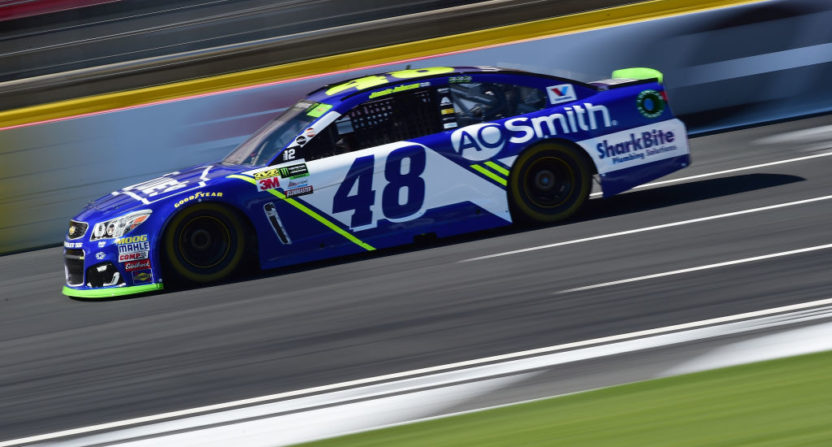 As the Monster Energy NASCAR Cup Series started the Round of 12 in Charlotte, they were fortunate to get the race in as the remnants of Hurricane Nate closed in on the southeast.

But with just 54 laps to go, Jimmie Johnson pulled in for a stop. Entering the pit 4th, Johnson pulled out and immediately was told to stop. A crew member didn’t get all five lug nuts tight on one of Johnson’s tires and went to tighten that one lug nut to eliminate the possibility of the tire coming off or the car handling poorly due to a loose tire. Johnson would exit the pit 15th and eventually finished 7th.

Many people were left confused as to why Johnson wasn’t penalized a lap. When a car pulls into their pit, the front of their car must be contained in their pit box while being serviced. When Johnson had his pit stop, the car was inside his box but when he stopped so his tire changer could tighten the lug nut, the front of his car was outside and one would think that would have been a one lap penalty.

In addition to fans feeling confused, NBC’s commentators seemed puzzled as well as other crew chiefs, who study the NASCAR rulebook up and down in order to find the smallest of gray areas to exploit to gain an advantage.

NASCAR Senior VP of Competition Scott Miller went on SiriusXM to explain why Johnson wasn’t penalized and cited safety as the reason.

“It’s funny that this has come up now because it’s high-profile now that the playoffs, we’ve been calling that particular thing consistently over the past couple of years with the lug nut,’’ Miller said. “The way we look at that one is they did their normal pit stop in the pit box. He left. They realized they had a lug nut and at that point to us it becomes a safety issue and allowing them to put the lug nut on. The penalty becomes they lost probably 10 or 12 spots during that pit stop. That’s a penalty.”

“We let them do that because we want to make sure that it’s a safe situation out there on the race track. That’s the way we’ve been calling it. We like to give the teams the benefit of the doubt if we can, especially when it comes to something that might create an unsafe situation. That’s the basis for that call. It’s interesting that it’s so high on everybody’s list today when we’ve been calling it for a couple of years now.’’

I have many problems with what was said here so let’s parse this out.

First, don’t act surprised and say people are only bringing this up because it’s the playoffs. More people pay attention to the playoffs and every decision does get analyzed more because it is the playoffs. It’s higher stakes, there are millions of dollars and legacies on the line that hinges on the calls NASCAR makes. And this decision here could help and hurt multiple teams in whether or not they advance to the next round. So stop condescending us by saying that.

Second, while I’m all for making NASCAR as safe as possible, it seems a bit strange that NASCAR is citing safety in not penalizing Johnson here when they stopped penalizing teams mid-race when they didn’t tighten all the lug nuts on their cars. Granted, this was something teams wanted and NASCAR obliged but you would think if safety trumps all in terms of making rules, that NASCAR would want to crack down on loose lug nuts during a race. NASCAR does check lug nuts after a race and issues fines and crew member suspensions depending on how many lug nuts were loose.

Third, even if this is true and NASCAR has been doing this for years, that still means the rule is inconsistent. By claiming the pit stop is finished and then being able to tighten a lug nut, how is that any different than when a car stalls in their pit when they run out of fuel? When a car stalls, crew members can only push a car three pit stalls before having to stop and back up to try again. That’s not part of the pit stop, why is that a rule? I understand crew members not being allowed to push a car past pit exit because that would be a safety hazard but what’s the difference between three pit stalls and 20 pit stalls as long as it’s within the confines of pit road?

Fourth, saying that Johnson’s penalty was losing “probably 1o or 12 spots” was what set me off the most. How on earth can you claim any sort of consistency of giving penalties when you feel that losing an arbitrary number of spots is a viable penalty? What if Johnson was the last car on the lead lap? If NASCAR does the same thing here and Johnson was the last car on the lead lap instead of 4th, he literally gets no penalty. There are pit road rules where under caution, the penalty is that you are at the end of the line. And if you are the last car on the lead lap, it’s no harm, no foul. But even that brings a penalty because you are behind the lapped cars and you must get through them before competing for position. And, more importantly, it is a set penalty written in the NASCAR rulebook and doesn’t seem like it’s some arbitrary ruling based on the situation.

That’s what many fans have a problem with the sport, making rulings based on the situation and that breeds inconsistency. NASCAR has a problem where fans believe they favor the top stars of the series and manipulate races by throwing cautions for “phantom” debris in order to guarantee close racing and/or to get their stars competing for the win. I’m willing to give NASCAR the benefit of the doubt and say they don’t manipulate or fix races. Think about this critically for a second, if NASCAR actually fixed races, Dale Earnhardt Jr. would have won at some point in his final season and would have been in the playoffs.

But at this point, it doesn’t matter whether or not NASCAR does or doesn’t manipulate races, many fans believe they do and that is the issue. Fans don’t trust NASCAR as being a legitimate ruler of what goes on in their sport and something like this, even if NASCAR feels they’re in the right, only helps strengthen that distrust.

One solution I have that eliminates this, have rules that don’t invite gray areas like what happened with Jimmie Johnson. The rule should be in black and white. If you service the car while the front end is outside of your pit stall, either backup and get completely into the stall, or you receive a one lap penalty regardless of the circumstances. If you overshoot your pit and the front end is over your pit stall, you have to backup or receive a one lap penalty and this is no different. Giving the safety excuse when there was a time where teams intentionally didn’t tighten all lug nuts in order to cut down on pit times for the end of a race (and the reason why NASCAR checks lug nuts at the end of races) gives what Miller said no weight and again strengthens what NASCAR fans actually think of the people who are running the sport they love, even if it isn’t the case.