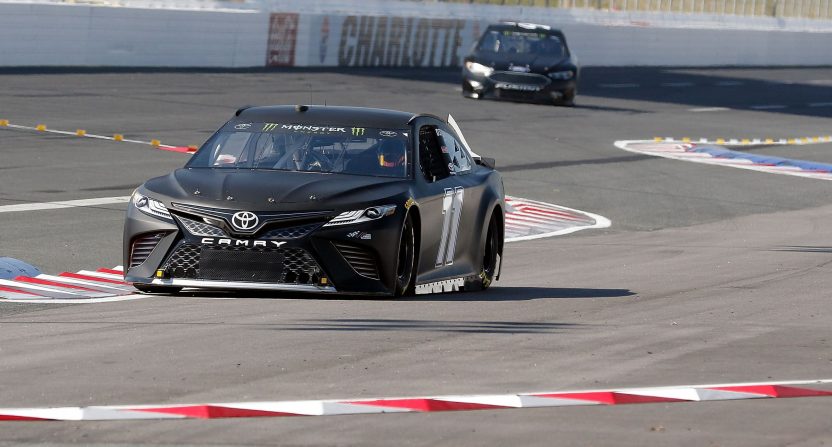 I’ll be the first to tell you that I have absolutely no clue what will happen on Charlotte Motor Speedway’s Roval this weekend. It’s a track that has never been seen in NASCAR. It’s a track that combines the banked corners of an oval with the intricate left and right turns of a road course. And if anyone thinks they know what will happen, they really don’t. They’re just guessing like the rest of us.

Before this weekend, cars have only been on the Roval in test sessions. And even under test conditions, many drivers have already fell victim to this tough track.

The Roval, or the “Road Course at Charlotte Motor Speedway,” is something NASCAR fans have been asking for. Fans wanted more road courses. Done. Fans wanted a road course in the Playoffs. Done. Fans wanted fewer 1.5 mile races on the NASCAR schedule. Done. Being in the middle of a long-term contract where Speedway Motorsports Inc. and International Speedway Corporation has the rights to the vast majority of races, this was the best case scenario for NASCAR and SMI to improve the schedule without losing a race in SMI’s contract.

This will be a race unlike anything and on top of all that, this is the final race for the first round of the Monster Energy NASCAR Cup Series Playoffs. Literally, anything can happen and four drivers will be eliminated after this race. Only Kyle Busch, Brad Keselowski, Martin Truex Jr., and Kevin Harvick (as long as he starts) can be sure they are moving to the next round. The other 12, including seven-time champ Jimmie Johnson (who’s on the outside, looking in), have had an uneasy week.

NASCAR should be entering this weekend with a lot of confidence. Yes, they have the NFL they have to deal with, but the Panthers have a bye week and the Roval should be something that can gain the interest of many NASCAR fans both watching on TV and at the track if, for anything, for curiosity reasons.

This also might be a pivotal weekend because while there is reason for NASCAR to be confident of a rise in ratings, a low number could be that final realization for even the biggest optimist that NASCAR is in serious trouble. This past Saturday night, NASCAR suffered their worst rating since at least the year 2000 with a 1.0 overnight in Richmond and have had more races post a rating lower than a 1.5 this year than then past 17 years combined.

There’s no way to directly compare this weekend’s race with previous years since this is the first year with the Roval, and given that last year’s Charlotte race was a week later, but considering last year’s race was the first race in the Round of 12 and on the 1.5 mile “cookie-cutter” track that fans haven’t much cared for recently, NASCAR is really hoping this results in higher ratings. This weekend is literally a perfect storm for NASCAR and NBC will have done everything in their power to give NASCAR fans what they want. If people don’t tune in and ratings don’t go up this weekend compared to the Charlotte race last year, nothing will be able to spur a noticeable increase.

Whatever happens, this race will be talked about in some way. Everyone is expecting some sort of carnage, so if that happens, that’ll surely be the talk of the NASCAR world. If not, and this becomes a boring “follow the leader” style race, then we’ll all talk about being underwhelmed. The important thing is that NASCAR is racing on a different course and that doesn’t happen every day. Whether this is a good, bad, or indifferent feeling, I have been looking forward to this race more than any other this season.

As far as who wins, trying to make a pick in this race before any practice and the likelihood of cars spinning out and wrecking at any time is a crapshoot. It’s an even bigger crapshoot than trying to pick a winner at Daytona and Talladega. And since I would surely be wrong if I tried to choose someone based on what I know, I’m going to let a random number generator choose a winner for me because that has just as good of a chance of picking the winner as I will. And they picked the #3 of Austin Dillon, so he’s my pick to win the first Roval race at Charlotte.