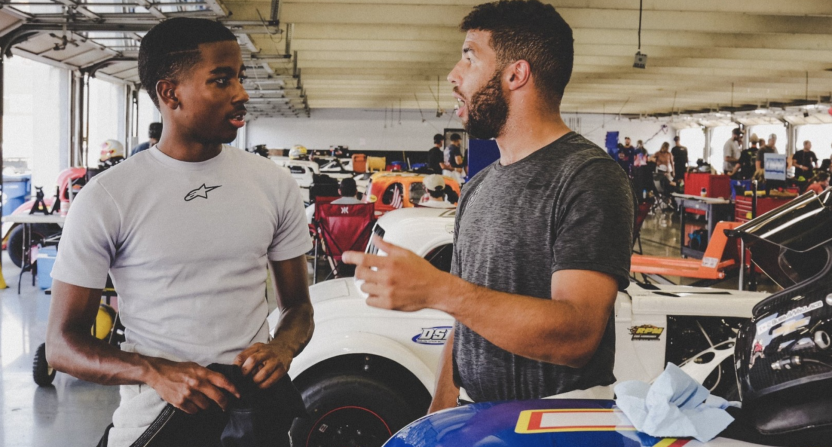 Rajah Caruth is carving out his path in NASCAR. Caruth just started his NASCAR career in 2017, but the 18-year-old has been able to make his mark in the virtual racing and actual racing world.

While he didn’t grow up in a racing family, Caruth became a fan by watching cartoons and racing die-cast cars. And after wanting to take a shot at racing himself, Caruth got into the sport via iRacing, taking part in the eNASCAR Ignite Series. As shown with drivers like William Byron, iRacing can be an avenue for aspiring racers who someday may want to make the transition to the real thing and someday reach the NASCAR Cup Series. Caruth noted that iRacing doesn’t teach you everything for the real world, but it can give you a great start to a racing career.

“iRacing really taught me the basics and just racing in general, in terms of race craft and etiquette and things like that,” Caruth told The Comeback. “Some of the driving stuff you can’t really transfer, but some of the lessons and encounters you have on there kind of teach you what to do and what not to do when it gets to the real thing.”

“Definitely [I wouldn’t be] here,” Caruth said. “I don’t know what would happen, but I’m really thankful to be with NASCAR Drive for Diversity and Rev Racing. Max Siegel, the drivers, and everybody… With the college intern program and pit crew member program, it’s a great initiative that really promotes inclusion and gets people exposed to the sport that wouldn’t be initially.”

Currently, on top of racing Legends cars and Late Models, Caruth has been able to try his hand at acting. Caruth, his father Roger, and NASCAR’s managing director of diversity and inclusion Dawn Harris, will be on an episode of Carl Weber’s The Family Business. The show is about a family who owns and operates an exotic car dealership, which would make sense for a race car driver like Caruth to take part in. The first half of the new season recently launched on BET+ and the second episode featured Caruth at the Daytona International Speedway. About the experience of taking part on the show, Caruth said, “It was cool being down there in Daytona, it was a pretty fun experience and can’t wait to see how it comes out.”

Caruth’s appearance on The Family Business does a few things. Caruth is able to put himself out there to a different audience that may or may not watch NASCAR and gain some new fans. He’s also an ambassador for a sport that quite honestly needs everybody within the sport to further reach out to primarily Black audiences such as The Family Business.

While Bubba Wallace is utilizing his platform to showcase NASCAR as a more accepting place for everybody, Caruth and many others are doing similar things in their own way. Caruth takes this all in stride, saying, “It was pretty cool just to be that representative [on The Family Business]. It’s really cool. I don’t really put any extra pressure [on myself], it’s just having some fun.”

Rajah Caruth is someone with a bright future. In addition to racing in the NASCAR Whelen All-American Series and the eNASCAR iRacing Road to Pro Series, Caruth is set to start school at Winston-Salem State University, majoring in motorsports management this fall. As someone who didn’t grow up in a racing family, racing has become a major part in Caruth’s life, and he plans to be involved in racing for years to come.