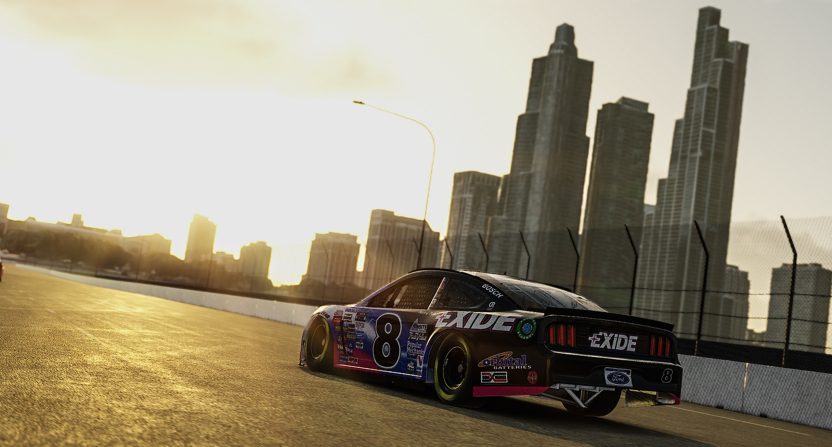 This past weekend, NASCAR SVP of Racing Development and Strategy Ben Kennedy revealed that NASCAR “ideally would like to get another big venue, another new venue on the schedule in 2023” but they were hopeful to share a little more info “in the next month or two.”

That “big venue” might be the streets of Chicago according to Sports Business Journal’s Adam Stern. Stern reports that even though an agreement hasn’t been reached yet, the organization has been in talks with Chicago officials including Mayor Lori Lightfoot to have a deal completed to race at Chicago starting next year.

.@NASCAR is getting closer to announcing a new street race in Chicago that would start next year, per sources.

🔲 Not yet clear who would lose a race, but NASCAR appears open to dropping a road course and Road America doesn’t have a deal yet for 2023.

Details are light but ever since NASCAR drivers raced an iRacing version of the Chicago Street Circuit on FS1, it’s been known that NASCAR was using that race as an experiment to see if street racing could work in NASCAR.

Street racing has its benefits, especially for a sport trying to increase its popularity it had once lost. Just like the Clash at the Coliseum, it’s bringing a race to the people (of the third most-populated city in the United States) and it’s a good chance that the majority of those attending will be watching a race in-person for the first time. Closed circuit racetracks are big street racing allows a racing series to bring their race to the people instead of expecting people to go out of their way and come to the race. That’s why NASCAR isn’t planning to race at Chicagoland Speedway, which is almost an hour away in the suburb of Joliet. Even if passing will most likely be way more difficult on a street circuit than a 1.5 mile oval.

As far as what could be replaced for Chicago, Stern points out that NASCAR has been hinting about being open to dropping a road course as we’ve gone from two to six in a rather short period of time. And with Road America president Mike Kertscher noting that they don’t currently have an agreement with NASCAR for next year that they would be the logical casualty.

That’s going to bring some criticism considering Road America brings some great racing and is in a lovely part of the country but I personally never had the belief that Road America was going to be a permanent fixture of the NASCAR Cup Series schedule. It’s like Circuit of the Americas, it feels more like a placeholder for the time being. Also, Elkhart Lake might be beautiful but it’s in the country and is situated in between Green Bay and Milwaukee, both cities over an hour away. A lot of factors go into mapping where Cup races are held and a track that is out of the way and the nearest airport is an hour away isn’t ideal. That’s a reason why Pocono lost a race.

I’ll certainly miss Cup racing at Road America if it does come to that but I was surprised the sanctioning body decided to race there in the first place. The Chicago Street Circuit should be a spectacle nonetheless if NASCAR decides to race in 2023.