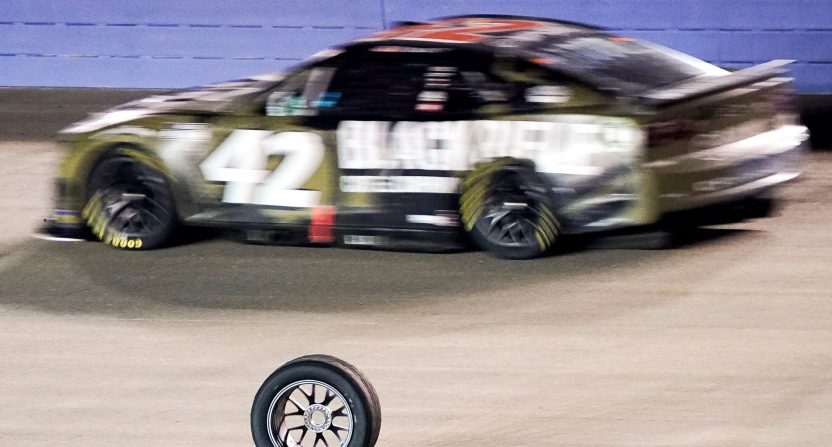 Chris Buescher’s No. 17 team is going to lose a handful of RFK Racing pit crew members for the upcoming stretch of NASCAR races after their car lost a wheel during the Ally 400 at Nashville Superspeedway this weekend.

A lost wheel during a race triggers an automatic four-race suspension for the crew chief and two team members. NASCAR will not reveal the identities of the specific crew members until June 29 when they release their weekly penalty report.

The wheel came off during green-flat pit stops on Sunday as the No. 17 Ford Mustang scrapped the wall with 46 laps to go. When Buescher came off the wall, the wheel rolled off on its own, signaling the suspension to come.

The harsh penalty comes from violating Section 10.5.2.6 in the NASCAR Rule Book, which states: “Loss or separation of an improperly installed tire(s)/wheel(s) from the vehicle will result in a four Race suspension of the crew chief and two additional team members.”

NASCAR implemented the rule and punishment a few years back over safety concerns, given that a loose tire on the track could cause serious issues to the passing cars, not to mention the car that loses the tire.

It’s something that many teams have had to deal with this season. BJ McLeod and the Live Fast Motorsports team received a suspension for losing a wheel at Talladega Superspeedway. A wheel came off Denny Hamlin’s car at the DuraMAX Drydene 400 at Dover, triggering a suspension. Bubba Wallace’s crew received a suspension after a tire came off at Circuit of the Americas.

In fact, there have been 12 such suspensions so far this season. And there’s a good reason why.

Why are there so many loose wheels this year?@SteveLetarte broke down what's different this year with the single lugnut on the Next Gen car. #NASCAR pic.twitter.com/OdfS1XZtuy