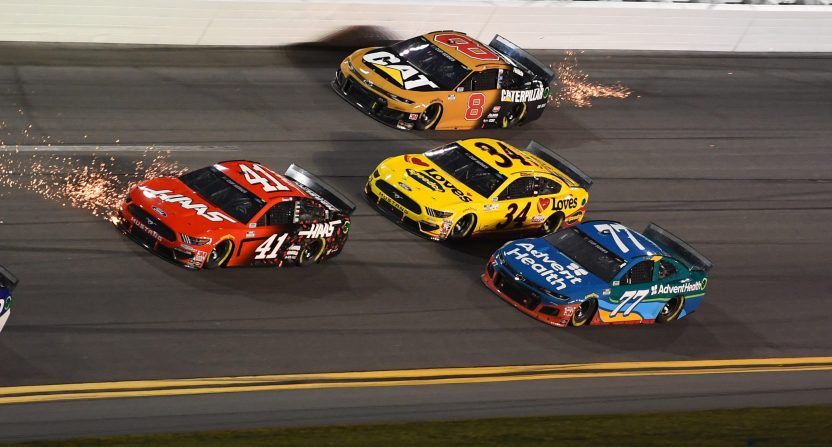 There are six drivers battling for Rookie of the Year this season. No disrespect to Quin Houff and Brennan Poole but they both drive for underfunded teams who will be in the back of the pack most races so they’re longshots. The winner is likely going to come down to three (or four) people, Christopher Bell, Cole Custer, and Tyler Reddick. John Hunter Nemechek is in better equipment as Houff and Poole but while his Front Row Motorsports team can get it done on superspeedways, it hasn’t been able to hold up as well on the other tracks.

The spotlight has seemingly been on Bell, Custer, and Reddick. All three drivers (one from each manufacturer) have moved up through the NASCAR ranks at about the same time and won a total of 34 out of the past 99 Xfinity Series races. In 2018 and 2019, all three were in the Championship 4 for the Xfinity Series championship with Reddick winning both times and Custer finishing second both years as well. In other words, these drivers were some of the best Xfinity regulars and are now getting their chance in Cup. The three rookies talked to The Comeback during Daytona 500 Media Day about starting their full-time Cup careers and what they hope to get out of this season.

Christopher Bell is the only driver of the three to switch teams but he remains under the Toyota umbrella. A part of Toyota’s youth development program, Bell has been successful on dirt and asphalt, winning the prestigious Chili Bowl three times in a row. A Gander RV & Outdoors Truck Series champion in 2017, Bell won an Xfinity high 16 races over the past three years. Six of Bell’s 16 wins came against at least one Cup regular and now that he is going against a field full of Cup regulars, Bell is hoping this will translate to immediate success.

“I think you have to look at the races that I competed against Cup regulars,” Bell said. “That’s the biggest, most important races that I’ve run in the Xfinity side, competing against guys like Kyle Busch, Kevin Harvick, and Joey Logano, those caliber drivers. Those are the races that I’m really focused on and paying attention to and noting how they went and now we’ll just have more of those guys. Instead of racing against two or three Cup guys, I’m competing against 39 other ones so those races where the Cup guys are in were the important races.”

Bell is driving the #95 for Leavine Family Racing. While they have an alliance with Joe Gibbs Racing, LFR is a single car organization, something that Bell has not only enjoyed but feels that by having the best of both worlds, his situation is better than his rookie opposition.

“It’s been a totally different feel for me because I’ve never, this is my first time ever driving for a single-car team so I’ve never had that in my life before,” Bell said. “I’ve always been with multi-car, big organizations but I’m loving the feel of it. It’s really cool knowing that the entire shop is cheering for you and everyone in the shop is putting their best foot forward.”

“I feel like I’m driving for a better organization [than the other rookie drivers]. I’m driving for LFR, having an alliance with Toyota and Joe Gibbs Racing. I feel like my equipment is going to be a lot stronger than the competitors.”

Cole Custer is on a team full of Playoff contenders. Custer may be the fourth guy at Stewart-Haas Racing but he’s also the fourth guy on one of the best teams in the series. Kevin Harvick has been in the Championship 4 the past few years and he, Aric Almirola, and Clint Bowyer have all won races. Custer understands the position he’s in. He’s been rewarded with a great spot right off the bat but that comes with expectations on being able to perform right away. The way Custer talks, he’s up for the challenge.

Custer said, “I’ve had the taste of kinda racing the Cup guys a little bit but at the same time there’s a lot more of them and the cars are a little bit different when you go to the Cup level. So it’s just a matter of getting used to the surroundings that’s the biggest thing and we kind of know what made us successful at the Xfinity level and just kind of applying that.”

“Stewart-Haas is one of the best teams in NASCAR right now and have some of the best people. They work extremely hard on the cars so I think it’s huge to stay with the same kind of team and work up from there. So we have good enough cars, it’s just a matter of getting me up to speed and from there and hopefully compete for some wins.”

Custer may not have started clocking Xfinity wins and great finishes as early as Bell and Reddick had but Custer broke the dam in 2018 where he scored a win and a runner-up finish in the championship. Custer outdid himself last season by clocking seven wins but remained second in the championship.

As far as who Custer feels is his biggest competition for Rookie of the Year, Bell and Reddick are going to be tough but you can’t worry about them if you’re unable to capitalize yourself.

“I think Tyler Reddick and Christopher Bell will definitely be hard to beat,” Custer said. “We’re all with pretty good teams honestly but at the same time, I think you gotta focus on yourself. You can’t focus on what those guys are doing.”

Among the three favorites for Rookie of the Year, Tyler Reddick technically has the most successful Cup career. Granted, he’s only been in two races but one of those was a top 10 at Kansas so Reddick can wheel. Back-to-back Xfinity Series championships doesn’t hurt either.

In the NASCAR Cup Series, the races are so long that what makes them difficult to win is that anything can happen that can knock you out of a win. That can be seen as a negative but Reddick is taking it as a positive. While a mistake in an Xfinity Series race means you’re likely out of a win, Reddick sees a longer race as a chance to correct that mistake and comeback for the end. Reddick said, “The mentality that you can pretty much recover from any [Cup Series] race…it might not turn around and mean we get a victory but it might mean we get a top 10, a top 15.”

While Reddick has been back-to-back Xfinity champion, he’s had to endure a lot of change. He won his first title with JR Motorsports and then won with Richard Childress Racing. Now, he remains with RCR and while Reddick has a new crew, he still has crew chief Randall Burnett. The stability in Reddick’s professional career is important at a time like this as he became a father over the offseason.

“[The stability has] been good,” Reddick said. “This is the first year in three years or so that I’ve had the same crew chief and same organization. The nice thing is that I’ve been able to stick with Chevrolet throughout all my switches from one team to the next in the Xfinity Series. Not changing manufacturers has been nice.”

How will the rookies fare?

The ceiling is high for these rookies but at the same time, expectations are high. Not only are these young guys going up against many Cup veterans who have done this for over a decade, they know that if they don’t go out and perform, there are plenty of men and women in the lower series who could come in and get an opportunity. The future is bright and these guys relish the opportunity.

Predicting who wins Rookie of the Year this season is going to be tough. No offense to John Hunter Nemechek but while he can go out and beat the others on any given week, I just don’t think he can do it over a full season. I also get the feeling that Nemechek could’ve been better staying in Xfinity for another season but considering what happened to Matt Tifft, the opportunity for a Cup Series seat came up and you’re not going to turn that down so I don’t blame Nemechek in the slightest.

Despite those drawbacks, the other rookies aren’t overlooking Nemechek. “Obviously, everyone wants to say Cole Custer or Christopher Bell are the two you gotta watch for but John Hunter has shown that he can get in that Front Row car and kinda move the needle where that car is supposed to run,” Reddick said.

This now comes down to Bell, Custer, and Reddick. All three can realistically do it and all three have their own unique qualities that can propel them to success. Asking all three what would be a successful 2020 season, all three said that they wanted to win Rookie of the Year, make the Playoffs, and be competitive for a win or two. While all three won’t be able to do that, those are pretty realistic goals for each person.

You can put all three names in a hat and draw who will win Rookie of the Year but I’m going with Cole Custer to win. Custer is a great driver and I just feel he has the fewest number of “unknowns” within his team. While Chevy tweaked their nose, there’s still an unknown as to how that car will run over the season. And while LFR has more funding and has a stronger alliance with Toyota, Christopher Bell is still on a single car team. That may have worked for Furniture Row Racing and Leavine Family Racing is in a similar position but Furniture Row was but that was more the exception than the rule when it comes to single car teams in NASCAR.

Custer takes over a car that just missed out on the Playoffs and he’s got three teammates who have won races and championships that can help him along. It might be the safe pick but I got Custer winning out for 2020.