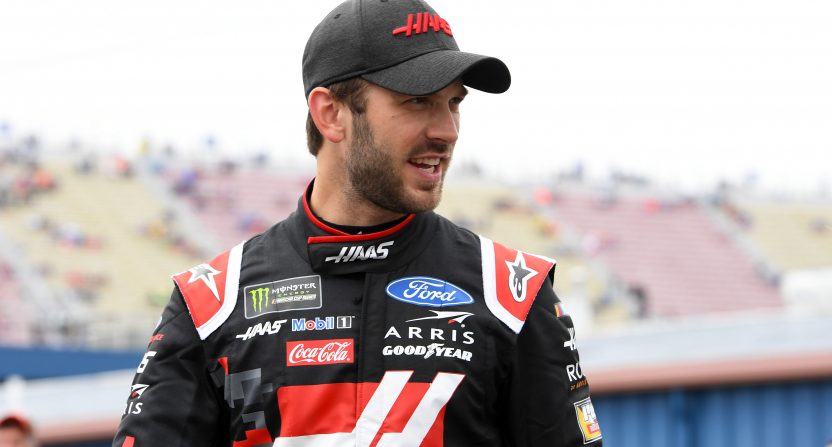 Daniel Suárez is the only current full-time NASCAR Cup Series driver not born in the United States. From Monterrey, Mexico, the 27-year-old Suárez has been racing in the United States since 2011, and became the first internationally born NASCAR champion within the main three NASCAR series in 2016. While Suárez has acclimated to life in the U.S., he hasn’t left his native Mexico behind.

In association with NASCAR and his sponsor Coca-Cola, Suárez launched “Daniel’s Amigos,” a supporters group that connects Latinos to NASCAR, and for many, brings them to the racetrack for the first time. I always tell people who aren’t NASCAR fans that once you go to a racetrack you’re going to be hooked, but it’s tough to get people to spend money and devote a weekend going out to the racetrack if they aren’t interested in the sport.

Suárez’s idea is to help people make that first step and come to the track. For instance, at this year’s race in Fontana, around 500 people showed up to cheer for Daniel, including some who got pit passes. And unlike any other fan club, the fans cheering for Suarez took on a bit of a soccer fan group atmosphere.

I got a chance to chat with Daniel as he’s planning another meetup this weekend in Las Vegas. It’s expected to be the biggest gathering yet.

Phillip Bupp: I had hoped this would be under happier circumstances, but sorry to see you’re out of the Playoffs. How disappointing was it to miss the Playoffs and what’s the strategy for the rest of the season?

Daniel Suárez: Well the strategy is to go out and win races. We still have ten races to go, and they are some important races and hopefully we can win some of them. That would be amazing. We have some work to do, but definitely we believe that we can do it so we’ll just have to work very hard for that and to try and make it happen.

PB: Was there anything you felt you could’ve done differently, or is that just in the rearview mirror for you and you’re on for the next ten races?

Suárez: I wish I could have done something different, but I mean we had decent speed [at Indianapolis]. I felt that was going to be enough to transfer and it was going to be enough to transfer until we got caught in the pit cycle and the caution came out. We started a lap down and lost all the track position with less 30 laps to go and it was impossible to recover from that. And I fought very hard to try to recover. It’s just a tough situation. I just have to control what I can control.

PB: You have got a great fanbase and you not only have many fans in the United States cheering you on, you got an entire country behind you in Mexico. Regarding Daniel’s Amigos, how did that come about and what can someone potentially experience at the track as part of your supporters group?

Suárez: Yeah, it’s something very cool that we try to bring Latinos to the racetrack and try to make them fans, because many of them might be fans but they don’t go to the racetrack. So we try to give them that experience that’s very very cool. It’s a lot of work through myself, NASCAR, Coca-Cola. They’ve been helping me bring this program together and grow Daniel’s Amigos.

PB: Mexico and the United States have a big rivalry in international soccer, and Mexico recently got the better of the USMNT last Friday. Being Mexican but also living in America and developing some ties here, is it easy to choose one team or the other to root for,, or is it difficult when they have to play each other?

PB: Now you touched on this earlier- I think my favorite part about Daniel’s Amigos is it is an opportunity to open up NASCAR to many people, especially Latinos, who might not have gone to a race otherwise. And it’s a great experience so if the race winds up not being as good, there’s a positive memory for them from the weekend. Do you know how many, when there’s a Daniel’s Amigos meetup, that it’s their first race and do you feel it helps in not only making fans but keeping them as fans?

Suárez: I don’t have the exact number but what we try to do is to try to bring people to a race when they’ve never been. So I would say that most of them, they either never have been to a race or are just getting into the sport because they just learned that there’s a Mexican driver racing in the Cup Series. It’s great to hear all the different stories of how they got to know that there is racing and now they follow the sport and they’re fans. It’s something very cool, I wanted to do something different, that not a lot of people do, and I want to bring all these new fans to the sport.

PB: And I heard that this upcoming weekend in Las Vegas, there’s going to be another Daniel’s Amigos meetup. What are the plans for your fans this weekend?

Suárez: The plan will be to have a meet-and-greet with them and give them a great experience. Every time we do something with Daniel’s Amigos, we try to it a little bit different each time, but the baseline is very similar. We’re trying to bring different sponsors so we can have a full tailgate party. To provide lots of food and make it better for them, make it more comfortable. Hopefully, slowly we keep making it better and better.

PB: If someone is interested in signing up for Daniel’s Amigos, what should they do?

Suárez: They have to go to my website, www.danielsuarezracing.com, and they can subscribe there. And from that, we choose a couple hundred people to go to the racetrack and we go from there. They have to subscribe to the Daniel’s Amigos program and they can be eligible to go to a race. We’re going to be at Las Vegas this weekend and then have something in Texas later this year, so a lot going on with Daniel’s Amigos the last couple months of the season.