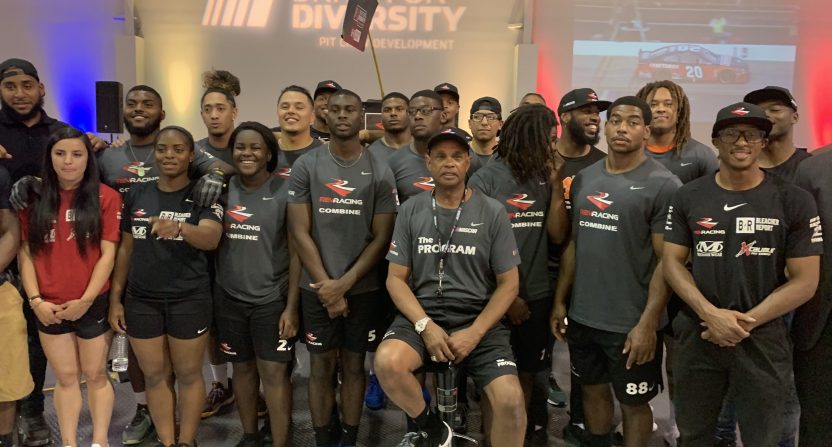 Gone are the old days where a team looks for volunteers at the track to help pit the car. Now, most teams employ athletes who specialize on a specific pit crew role and try to perfect their craft by working out and practicing every day.

NASCAR now travels around the country to various colleges looking for people who can withstand the athletic rigors of being a part of a pit crew. Through NASCAR’s Drive for Diversity program, their goal is to find minority men and women who may be interested in furthering an athletic career, but might not have the opportunity or might not be aware of the opportunity to go into NASCAR.

I was fortunate to be invited to witness NASCAR’s Pit Crew Combine in May. A total of 12 people were invited to participate. The combine consisted of the same obstacle course done in tryouts, as well as pit crew practice. The obstacle course consisted of 100 reps on a jump rope, jumping over a set of cones 25 times, maneuvering up and down a horizontal ladder five times, doing 25 reps on an ab roller, doing 25 push-ups, and doing 100 sit-ups. Phil Horton, Director of Athletic Performance and head coach of the combine, noted that while there is a goal of five minutes or better, he was also looking to see how much people have improved since they performed the same course in tryouts.

After a small break where participants got to speak to the media, participants got to practice pit stops as they were timed for performance. Perfection isn’t expected. Horton noted that it could take 2-3 years for someone to be fast and efficient enough to be top in their position, but he was looking for minimal mistakes and for the work to be done as quickly as possible.

Overall, it’s a very supportive atmosphere. Pit crew members who had been in Drive for Diversity visited and offered advice and support to the participants. It was clear that while it’s a competition and some wouldn’t be selected to move on, everyone was looking out for the best in everyone else and wanted to be the best they could be.

Out of the 12 invited, seven were selected to the program which will start in September. Of those seven, six men played College Football (three linebackers, two wide receivers, and a defensive end), and one woman played for the Paris Saint-Germain Féminine youth team before coming to play soccer in college. Those seven will embark on a training program from September to February where housing is provided by NASCAR. They will work with REV Racing, NASCAR’s designated Drive for Diversity team owned by former Dale Earnhardt Inc. team owner Max Siegel. And after that, hopefully it’s further opportunity up the NASCAR ladder and the ability to be on some top teams on the circuit.

Dalanda Ouendeno broke barriers by being selected this year. Not only is she one of the first soccer players to take part in the program, but Ouendeno is also the first person born outside of the United States to be accepted and the first French-born person to pit cars in NASCAR.

Discussing her time at PSG, Ouendeno told The Comeback, “It was amazing because I was born in Paris. I grew up in a suburb, but my high school was in Paris and it’s a city that I love. And being able to play for Paris Saint-Germain, it was such an honor. I played with PSG for six years and then I got recruited to play college here (first at University of West Virginia). We went to the (2016) NCAA Division I Championship Final. I transferred to the University of Miami and I’m here [with NASCAR].”

Mequel Phillips grew up in a military family, and while he was aware of NASCAR and some of the bigger names, he wasn’t really familiar with NASCAR until he tried out for Drive for Diversity. Phillips told The Comeback, “I knew just enough to know who some of the main guys were at the time to be relevant to it, but never once did I imagine myself like changing a tire or anything like that. Like I said, I have seen bits and pieces of a race but never pictured myself doing it.”

Phillips took the path of many other collegiate football players when it came to working in NASCAR. They still want to be in sports but know the NFL is an unlikely possibility. Being on a pit crew helps keep the competitive juices flowing, and Phillips views Drive for Diversity as a great opportunity to make others aware of another path they could be talented in.

“I strongly feel this is a great opportunity because you have a lot of athletes that don’t make it into the career field that they want simply because the numbers, it’s not enough,” Phillips said. “If you’re trying to go for the NFL, it’s only 53 [players per team]. In basketball, it’s only 15 [players per team]. So you got thousands of athletes that are in shape, looking for a call to go somewhere, and NASCAR’s another sport that those guys who like to lift or be quick, you can still work on those exercises and those fundamentals that you’ve been doing and just putting that into a different field so it doesn’t go to waste.”

Ouendeno concurred Phillips’ views on the importance of something like Drive for Diversity if for anything, to make people aware there’s an opportunity they may have never previously known about. “I think it’s really important because NASCAR’s such a good thing,” Ouendeno said. “I think so many people can be really interesting to NASCAR but then like someone like me, I didn’t know I could become a part of NASCAR.”

Both Ouendeno and Phillips found out about tryouts on campus. “NASCAR went on campus and I heard about them through the student athlete center,” Ouendeno said. “I was told NASCAR was coming on campus and I was like, ‘Oh, I want to try that.’ It worked out so they invited me here and it hopefully works out.”

“One of the professors in our Hyper department, which is the physical education department, had recommended the NASCAR event that was coming up,” Phillips said. “They said, ‘They’ll be here sometime this week, I think this is a really good opportunity for you, you should really check it out.’ Didn’t even hear anything about it, honestly, until two days prior so when they came to the school, I went down there and did the obstacle course in the gym and I was one of the two that was selected to come here.”

Ouendeno and Phillips, along with the other five participants, all understand that while they are at the next level, the work has only just begun. It’s going to take hard work improving and finding the opportunities to move up the ladder, but they know what’s ahead of them is an uphill struggle and are willing to accept that.

“Working,” Ouendeno explained her plan if accepted. “Working hard, hard, hard until I can join a team and hopefully have a great career. Working hard to be the best tire changer and see how it goes.”

“Training is the name of the game,” Phillips said. “Watch yourself, see what you’ve been doing, and always know that you can perfect your craft and always get better each and every day.”

NASCAR’s Drive for Diversity program has seen success stories on the driver side, but there’s much more to NASCAR than being a driver. There are only 40 seats in the Monster Energy NASCAR Cup Series and a successful driver really needs to start at a young age. Just due to a lack of seats, a more diverse grid might take somewhat longer than people prefer. There are more pit crew members, and being a pit crew member provides more opportunities as well as the ability to be a success at a later age. If NASCAR is to be more diverse, looking up and down pit road might be the place to look.

In a sport where time is of the essence and teams are constantly looking for an advantage, sometimes looking for personnel in overlooked places can unlock success. That’s what Drive for Diversity is all about. Yes, the program is meant to find minority candidates, but it’s more about casting a wider net in overlooked places to try and find the best of the best. This program gives people a chance, but that’s all they get- a chance. And while they get that chance, the hard work required to progress in this sport is only beginning for these seven people.