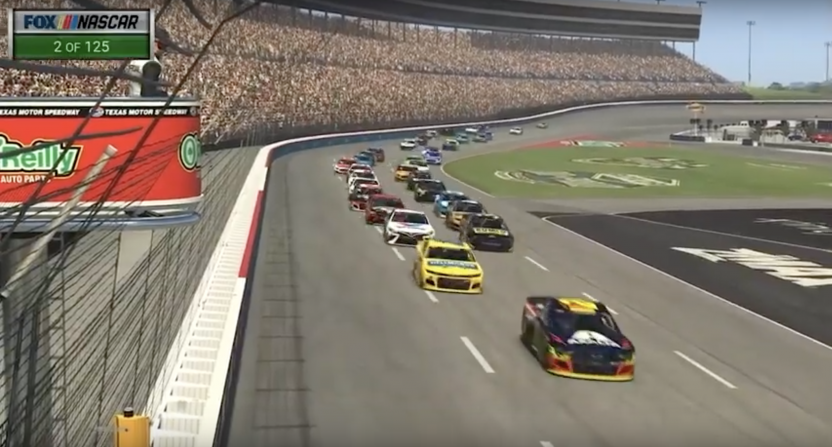 One of the few bright spots in sports over the past month has been the rise of eSports and for iRacing. After a bunch of NASCAR drivers and crew were interested in having some fun on iRacing, drivers, iRacing, NASCAR, and Fox Sports got together and started the eNASCAR iRacing Pro Invitational Series to give drivers and fans something to take our minds off of things for a couple hours each Sunday.

The phenomenon became a hit and what was a fun thing with a bunch of drivers is now the hot thing everybody now wants to be a part of and maybe use this to help their career. After two virtual races, it became clearer and clearer that things needed to change to accommodate everyone and NASCAR is stepped in.

NASCAR announced that the format for Sunday’s televised race will be altered where the starting lineup will be set with two heat races. Fox Sports’ Bob Pockrass mentioned that the 30 drivers invited for the televised virtual Bristol race on Fox and FS1 will consist of either current or former Cup Series drivers.

For those not in the Cup Series, NASCAR announced that drivers in other series will be placed in a Saturday night race. Called Saturday Night Thunder, drivers from the Xfinity Series, Gander RV & Outdoors Truck Series, ARCA, PEAK Mexico Series and Whelen Euro Series will be placed in this race which will be streamed on eNASCAR.com. Drivers racing on Saturday night will not transfer to race on Sunday.

It’s unknown whether or not this format change is permanent or just for this weekend’s virtual Bristol race since it’s a short track. Regardless, there is probably a better way to make this work for everybody.

What I love about the eNASCAR iRacing Pro Invitational Series is it gave some drivers an opportunity to step up and grab some of the headlines that they normally wouldn’t have been able to. And that’s a chance to gain new fans and a following within the sport. It’s great that NASCAR is adding an additional race on Saturday night but let’s face it, way fewer people are going to watch Saturday night just because the race isn’t on TV. And because of that, it denies many drivers the opportunity to get their name on TV in front of over a million people. Instead of rewarding who’s great at iRacing, we’re giving already made stars with varying iRacing skill, more TV time.

I get the logic behind only having Cup stars. Recognizable stars bring in ratings and it doesn’t matter how great Ty Majeski is at iRacing, more people will tune in if Kyle Busch is racing in the middle of the pack. That’s fine, but that shouldn’t come at the expense of the opportunity to build up some future stars of the sport and give them an equal platform to shine. That way, when the current stars retire, NASCAR isn’t back in a hole they used to be in when people like Tony Stewart, Jeff Gordon, and Dale Earnhardt Jr. retired.

My idea combines stars and the potential future. If NASCAR isn’t willing to make it open entry with heat races and not guarantee spots for anyone, give automatic spots to 20 Cup drivers and decide who gets them based on star power and iRacing ability. The Busch brothers and Jimmie Johnson may be trying to get the hang of iRacing but they have large fanbases so many of them will tune in. Drivers like Garrett Smithley (pole sitter for the first race) and Timmy Hill (last Sunday’s winner) might not have too many fans right now but they’re great at iRacing and the quality of the racing will improve with them in there.

After those 20, leave the final 10-15 spots (depending on track size) for the rest of the field to run on Saturday and the best finishers from Saturday night get to race on Sunday. That way, people from other series can have an opportunity to make the main show and showcase their talents to lots of people.

Whatever the format is, it’s an escape for a Sunday afternoon and everybody involved deserves applause for doing that. At the same time, with just a couple tweaks, this can be even better for everybody involved. Regardless, I’m still looking forward to races on Saturday and Sunday.