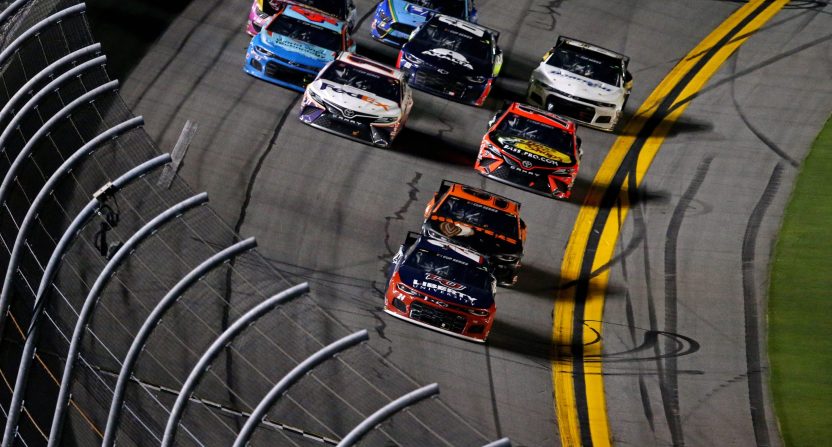 We often think of tradition as something that is timeless. Something that has always been known, and it would be sacrilege for anyone to dare alter that. At the same time, traditions have to start, be adjusted, and sometimes end at some point. That’s just what happened at Daytona this past Saturday, and quite honestly, it was a much needed change. So much so, that making Daytona the regular season finale for the Cup Series should be NASCAR’s newest tradition.

Dating back to 1959, the summer race at Daytona was always planned to be run during Independence Day weekend. Other than in 1998, when wildfires pushed the race to October, the Coke Zero Sugar 400 used to be the sign for NASCAR fans that summer was in full swing and racing in Daytona was an Independence Day tradition.

For 2020, even before the COVID-19 pandemic discombobulated everything, it was revealed that the 400 mile Daytona race would happen in late August with the Brickyard 400 taking the July 4th weekend spot. As expected, many were unhappy about this deviation of tradition, but the drama and the racing from this past weekend improved in such a way that it was worth breaking a 50-plus-year-old tradition if it’s an improvement on what has been done.

Daytona is a place where most of the field has an opportunity to win. That’s what makes Daytona a perfect track for ending the regular season. Unlike Indianapolis, where there isn’t as much passing and we have a good sense who will win, Daytona is a wild card.

The storylines were there. William Byron, Matt DiBenedetto, and Jimmie Johnson were looking to claim the final two spots in the NASCAR playoffs. Drivers sitting 18-30 in points, who couldn’t get in via points, were in a “win or bust” scenario, knowing that would be the only thing that gets them a playoff spot. Those already locked into the playoffs want another opportunity to get playoff points that will help them advance in later rounds.

Based on that, at least 30 drivers every year have an added reason to win the final race of the regular season. 3/4 of the field are either looking for playoff points, regular-season points to remain in the top-16, or need to win. Add all that together, at a track where everyone feels like they have a legitimate chance to win, leads to what we experienced Saturday night.

Many drivers who needed to win, like Tyler Reddick, Chris Buescher, Erik Jones, and Bubba Wallace, were up toward the front near the end. But in the end, after a couple big wrecks took out many in the field, it was Byron picking up his first career Cup Series victory. Once Johnson crashed, Byron didn’t really need the win to get in the playoffs. But everyone wants to win, and getting his first win now will bring added momentum for the playoffs. The race itself was so great, it resulted in the highest approval rating (90 percent) among all Daytona races in the history Jeff Gluck’s good race poll.

Much of why the race was so great was based on the added drama and pressure of this race being the regular-season finale. And for those who are traditionalists and still don’t like this race being moved from July 4, I should point out that this race in particular has seen changes throughout its history.

When the Firecracker 400 first began in 1959, it was originally a 250-mile race until 1963. That’s okay; the race was only around four years. Adding 150 miles to the distance didn’t really alter much tradition. But from 1959 to 1987, that 250 or 400-mile race was held on July 4. And it didn’t matter if July 4 fell on a Saturday, Sunday, or Wednesday, NASCAR raced on July 4 and raced early in the morning. In 1988, with the rise of TV and broadcasting NASCAR races live, the race moved to the weekend closest to July 4 and was put on at 11 AM to get the race as late as possible and avoid the summer heat of Florida.

Another change in tradition was a move to night in 1998. Again, a much better fit for TV and to avoid the heat. Lights were installed at the track and the race moved from morning to prime time TV. In all this time, the name of the race changed from the Firecracker 400, to the Pepsi Firecracker 400, to the Pepsi 400, to the Coke Zero 400, to the Coke Zero Sugar 400. Yes, changing the date of the race from around July 4 to the end of August is a big shift, but even before this year the summer Daytona race looked a lot different than its original version. And in all that time, we incorporated many changes into what we held as tradition and made those traditions in their own right. Why can’t we do that once again by making Daytona the regular-season finale?

Please don’t confuse me for someone who loves to disrespect tradition and want constant change. I’m very much someone who loves to look back on the past and enjoy things that have remained the same over the years. At the same time, I view tradition the same way I might look at a team considering firing a head coach or trading a player. If you’re going to make that change, make sure that change makes things better.

One example of a change in tradition that was a bad idea was moving the Southern 500 away from Labor Day weekend. The race moved to November in 2004, and then Mother’s Day weekend starting in 2005. It just wasn’t the same, and people in power eventually came to their senses, moving the race back to Labor Day and adding a throwback feel which has been very popular among everyone in the sport. The Southern 500 moved their start/finish line and added lights during that time, and both things were improvements in some shape or form, which have now become tradition. But the date change did nothing for the race, the track, or the sport, and now we’re back to early September.

Unlike Darlington, this date change improves Daytona and their summer race. We may not have Daytona on July 4 anymore, but over time, we can look back and see Daytona in late August as something everyone is used to, and eventually get upset if someone suggests moving the race out of the Cup Series regular-season finale.